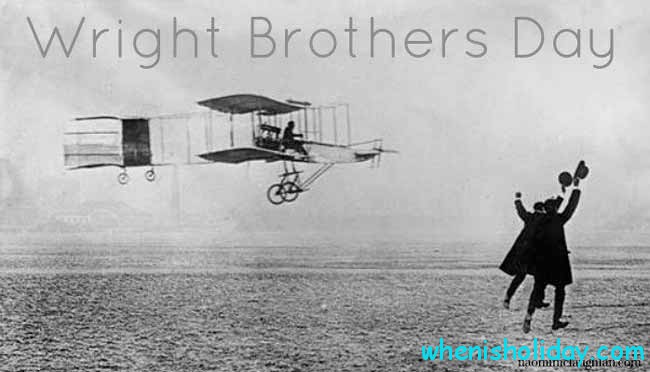 Can you answer the question “When is Wright Brothers Day in 2021?” immediately? As a rule the most part of contemporary people is not able to do it. And it is not good, of course, because these men should be remembered as the great scientists.

But let’s discover this matter in details and from the very beginning.

Frankly speaking it is rather difficult to get the proper answer to the question “What is the day of Wright Brothers Day 2021?” without discovering the historic background in details.

There is a common knowledge that two famous brothers called Wilbur and Orville Wright once built the very first airplane on the planet.

However it was not everything. After that they alone performed the first controlled flight with a human inside the engine machine, which was heavier than the around air.

This terrific historic fight happened on 12/17, 1903. And that’s the reason, why today this date, exactly December 17, is considered to be a holiday. By the way it is fixed, which simultaneously means that it is celebrated each year without any exceptions.

The brothers’re born in a large family and had five other sisters and brothers. The oldest Wilbur was born in 1867, Orville was four years younger.

Much later, in one of the interviews the inventors told that they became interested in flights, when their father gave them a tiny and cheap toy-helicopter, which was designed according to the invention of one of the aviation pioneers called Frenchman Alphonse Penaud. Boys had been playing with it enthusiastically until it broke. After that they made a new model by themselves!

Nowadays it is difficult to say whether it was a fact, or perhaps the famous brothers came with this story when they were already in the heyday. But in their youth the aviation was not definitely the main hobby of the boys.

Funny, cheerful, energetic Wilbur changed dramatically after the age of 18 when he received a serious face injury. Despite that fact that the physical pain had disappeared, emotionally Wilbur turned to be quite a different person. Being gloomy and reserved he didn’t go to university and that’s why stayed at home to help his parents.

Orville, who had problems with his studies at school, didn’t receive any education, started his own business.

What does Wright Brothers Day mean? – Frankly speaking, it is impossible to answer definitely. At first, the brothers engaged in the profitable publishing business, but the success came, after the opening a workroom and a bike shop. It was the time when the US experienced a so called “bike boom” and this situation helped the inventors to get good money.

But the answer to the question “When is Wright Brothers Day 2021?” should be known not because of this reason.

These two young men’re rather creative, being in the business of advanced for that time period technologies, the inventors were aware of all popular technical innovations. At the end of the XIX century tryings to conquer the sky on the special machine, which heavier than the surrounding air, were in popularity.

In fact, the brothers’re the pioneers, who had developed a scheme, which has been considered to the aircraft control basis up to the present day.

That’s why many aviation specialists believed that it appeared at a time when the Wrights filed a patent application for that invention, not at the moments of the very first flight.

Using the money, received from business, the brothers’re able to hold their personal aviation experiments, which in the end, as we know, resulted as a successful construction of managed aircraft. The very first plane was called Flyer-1. It was equipped with a propeller and engine, constructed according to the brothers’ own design. The Flyer 1 plane entered the aviation history as among the most significant events.

Read more:  👭 When is National Sister in Law Day [year]

1908-1909 years were considered to be the peak of glory for these famous people. They founded their own aircraft company, but unfortunately it did not have a great financial success, and as a result Orville sold it. Wilbur died 3 years before – in 1912. He spent much time on various trial in defense of their copyright, which were held in different towns, cities or even states, fell sick with typhus.

From 1899 to 1902 the brothers developed and improved their model gliders. In 1902, after many experiments, they were able to do something special, that anyone could do before. – Their flying machine was heavier than air and completely manageable. The Wrights managing system allowed to control the apparatus on three axes.

Wright died in 1948, aged 76.Until his death he continued tryings to win the priority challenge of the brothers as the main sky conquerors. In the US Smithsonian Museum the famous sample appeared only 1 year after the second creator’s death. 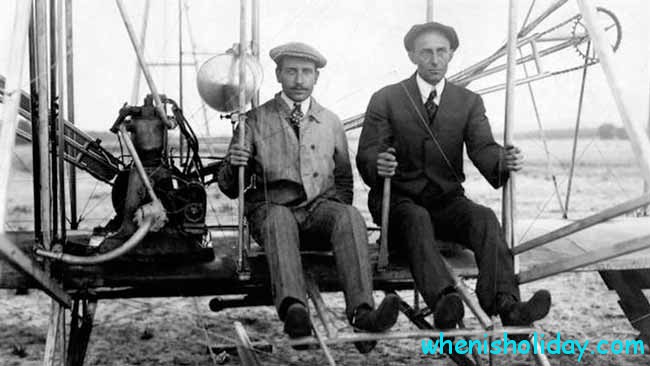 As a rule technical progress usually moves in different ways. From time to time it is a breakthrough idea, which appears thanks to the genius of confinement and is considered to be something, that is ahead of its time. And sometimes, on the contrary, everything is ready for the success, there are all the conditions and tens or even perhaps hundreds of people are on the threshold of a great invention. However, in the history there always remains the one, who could make a crucial last step. Americans Wrights became those inventors for the world aviation.

Read more:  🛋️ When is National Organize Your Home Day 2020

Nowadays when is Wright Brothers Day in 2021, calendar will tell you without any difficulties. On 12/17 many contemporary people prefer visiting specialized exhibitions and museums. There it is possible to find out the answers to all the interesting questions and get the necessary information.

Although the Wright brothers are attributed most of the leadership in the invention of the airplane, in fact, some successful attempts to build aircraft were made before. But their indisputable contribution into the world science was made in the area of air machine operation. Their work is considered to be a tremendous step into the development of aircraft building.

Despite many earlier studies in this field, a number of attempts and the priority claim, it is indisputable that the Wright brothers rightfully have had the lion’s share in the airplane invention. In determining their place in the corresponding list, the role of the airplane is considered to be a controlling factor. Undoubtedly, this invention is of great significance. Even nowadays it has used in peacetime as well as during the war. Just in a few decades airplane made our planet smaller and the world didn’t seem to be so big any more. Moreover, these successful achievements in the field of controlled flight were a significant step for the development of space travel.

For many centuries before, people dreamed of flying. And at the same time the most sensible people always knew that “flying carpets” from the Arabian tales are dreams that would never come true.

The genius of the Wrights realized the age-old dream and turned a fairy tale into reality.

In the modern world many of us choose planes instead of trains, buses, cars and boats that is why it is recommended to know what day Wright Brothers Day is, as a mark of gratitude to great scientists for their inventions.