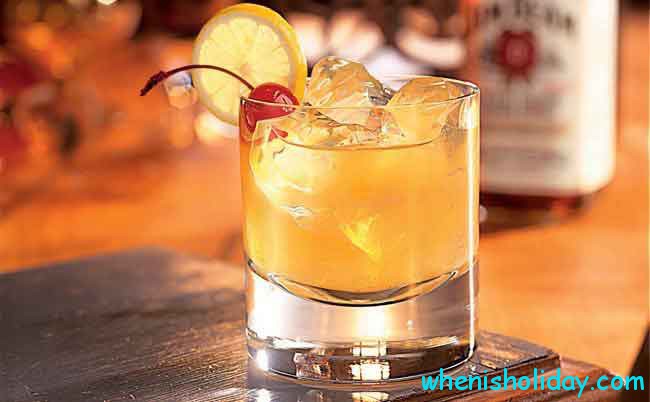 This cocktail would go well both for the men and women. The pleasant sourness together with the strong notes of the alcohol, accompanied by the evident sweetness of the syrup, makes up the excellent Whiskey Sour. We bet you’ve recognized the drink from the very first lines if the description!

When is National Whiskey Sour Day in 2022 and how many glasses you can gulp down in honor of the holiday?

First, a bit of the history.

There is a version that claims that since the beginning of the 18th century, the sailors of the Britain’s Royal fleet were forced to eat the whole lemon each day because of its ability to prevent the illnesses such as the scurvy (or the deficiency of the vitamin C). The very first man who studied the influence of the citruses on the organism of the human was a Scotland citizen and that was him who ordered to introduce the lemon and lime to the fleet’s dieting. As this was not much of the enjoyment – to eat the sour lemon daily – the cunning sailors came up with the idea of mixing the juice with the grog.

In a while, that mixture became called like “sour”. The drink was quick to spread among the locals on the ground and soon the people brought it to perfection by changing the rum on the whiskey and adding a tad of the sugar to eliminate the bitter taste. Just like that, the new alcohol favorite was invented!

However, there are two more variations of the beverage’s origin. The first is that it was created by an Englishman who moved to Peru and opened his own bar in there. He experimented with the various alcoholic drinks that were available in the country, mixing them with the really exotic items. The experience showed that he actually liked the utterly sour el limon de Pica – the local sort of the lime – so he made it a key ingredient for the new sour. The cocktail became the so-called symbol of his bar which was, by the way, located near the port. The sailors were one of the first to get to know the unusual combination of the tastes and spread it all across the world.

According to the other story, the cocktail was made up by one of the most famous bartenders ever – the father of the American mixology, professor Mr. Thomas. At the end of the 19th century, he published a book “How to mix the drinks” where there was a mention of the Whiskey Sour. A bit later, the local newspaper wrote the recipe of the cocktail which became the starting point in its popularization.

Simple and unpretentious as it is, the beverage went down in history as one of the most traditional alcohol liquids on the American continent. When is International Whiskey Sour Day 2022? Interestingly, but the date is not related to any of the aforementioned versions and, on top of that, is celebrated in the middle of the sweltering summer!

What does National Whiskey Sour Day mean? It means reveling in the concentrated enjoyment and feeling the combination of the best tastes rushing down your veins with every sip of the liquid.

The cocktail is not just popular in the United States. It is served in every restaurant and bar in the country and the variations are multiple. A lot of the enthusiasts tried to add something new to the classic and it actually oftentimes ended well.

There is a whole bunch of the healthy advantages of the alcohol if you consume it in the rational amounts. First, it enhances the working processes in your brain. The drink contains a lot of the chemicals that improve the special function and eliminate the risk of dementia. Second, it protects the heart. More than hundred of the different research showed that the whiskey is the best security guard for your health (comparing to the others sorts of the alcohol). Two tablespoons a day decrease the risk of the heart conditions on 50%. The acid present in the liquid is also the powerful antioxidant that destroys the free radicals which are one of the reasons of cancer. It helps boost up the immune system: it effectively struggles against the flue and infections.

Also, the liquid prevents diabetes by dropping the chances of developing the disease by 40%. It actually improves the abilities of the organism to control the level of the glucose. Moreover, it helps losing weight! There are almost none carbohydrate and calories in the whiskey. Plus, it fixes the digestion and puts down the appetite protecting you from the overeating.

Regardless of what day World Whiskey Sour Day in 2022 happens on, remember of its positive points when consuming properly!

It lowers the risk of the stroke as it washes the cholesterol out of the blood vessels. The relaxed walls of the arteries make the blood flow without difficulties. One of the biggest advantages of the drink is its ability to prevent stroke, so why not sip one right now? Plus, it is an effective fellow against the stress. It puts down the anxiety and uneasiness, calms down the nerves and helps your body relax. It increases the blood flow in the organism providing the organs with the fresh and full of the oxygen blood. The antioxidants containing in the beverage could enhance the operating abilities of the brain and thus the memory gets better. The same chemicals that are responsible for preventing dementia are also involved in keeping your brain young and active.

Interestingly, but the drink contributes to longevity. The antioxidants – obviously, the good fellows – can add you a couple of years by reducing the risks of the certain illnesses. The thing protects you from the damaging effects and prevents the slow disintegration of the important cells in the organism. 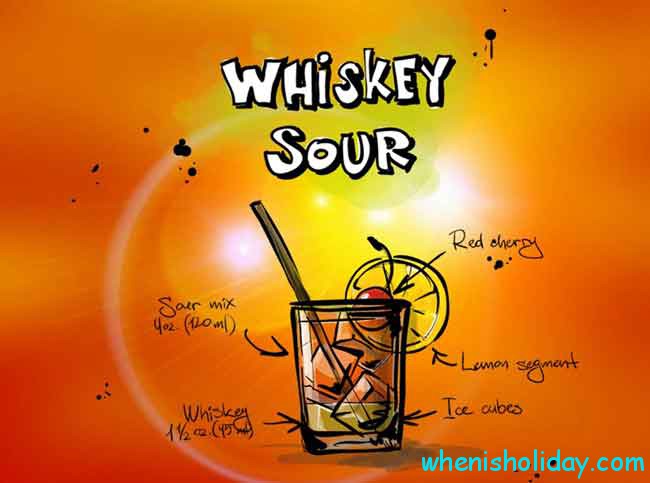 The name of the cocktail derives from the name of the main alcohol ingredient and the term “sour” which indicates the sour juice of the citruses and the sweetening elements. The drink perfectly combines the four essentials of the good cocktail – the moderate strength of the alcohol, the light bitter taste, the pleasant sourness, and the slightly tangible sweetness.  The beverage is a classic one and is also enlisted in the codification of the International Bartenders’ Association. The traditional garnishment of the glass full of the Whiskey Sour is the slices of the orange or lemon and the maraschino cherry.

What is the date of National Whiskey Sour Day 2022? It takes place on August 25!

The ingredients for making the delectable liquid could be bought in the nearest convenience store. Although it relates to the sort of the strong alcohol drinks, its components make it easy to sip little by little and at the same time enjoy the excellent taste.

There is no better way to celebrate the date except for making your own Whiskey Sour!

So, fill up the short tumbler with the ice cubes. Pour the quail egg white into the shaker, together with the lemon juice, sugar syrup, and bourbon. Shakeitthoroughly, then add the ice cubes and stir properly one more time. Pour from the shaker into the tumbler through the strainer and decorate with the slice of lemon.

Invite a couple of friends and spend the evening in the conversations near the fireplace with the most classic cocktail in your hand.

Tick off in your calendar, when is Whiskey Sour Day in 2022, and be sure to tilt the bottom of your glass until it is empty!