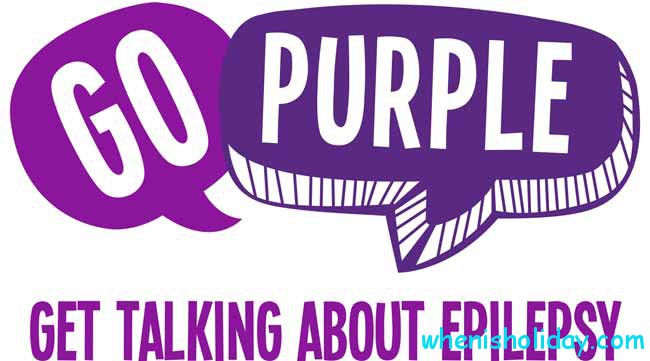 We live in a dynamic and developing world full of fast-developing technologies and specialists. However, there are many things and illnesses we cannot still deal with. Thousands of people around the world are trying to fight against diseases and overcome these disorders but it is not always crowned with a success. Hundreds of foundations are created to support these people and let them have a sporting chance of recovering from their illnesses. Millions of dollars are collected yearly but it is still not enough as people haven’t found an antidote or cure to most of them. Today, we are talking about one of such situations which shows us how the people can cope with it and how much damage it deals with them. So, when is National Purple Day in 2018?

The global event has been held yearly on 26th of March since 2008. The main purpose is to raise an awareness of epilepsy, reduce stigma, and empower those living with epilepsy to fight against it and take action in their communities. An author is well-known Cassidy Megan, a small girl from Canada who proposed to create such an event. 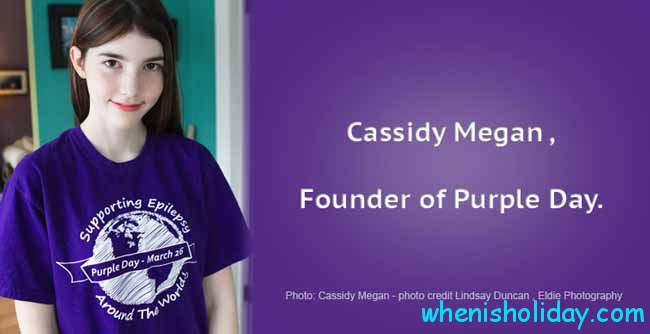 As it was told above, the event is connected with a girl from Nova Scotia, Canada who has had epilepsy since her birth and she perfectly realized the earnest and gravity of this problem. The first thing that motivated her was her own struggles with it. The idea of N.P.D. was found in 2008 and most of the organizations and foundations were created in 2009. In such a manner, The Epilepsy Association of Nova Scotia supported the girl’s ambitions and made a splash in society to get a feedback. Thousands of people got in on the act and joined the foundation. Then, in 2009, New York-based Anita Kaufmann Foundation and the first one united to launch a huge project involving as many countries as possible. In a couple of months, many politicians, schools, businesses, students, and non-indifferent people were involved in the project. On 26 of March 2009, the first biggest launch party was organized where Paul Shaffer, an actor, singer, comedian, was in the picture. He is familiar with an epilepsy issue and all the mental stumbling blocks people face with. Also, his cousin is an epileptologist in Canada which was rather useful for that party. Thus, the international epilepsy awareness campaign was launched. Now, you have a type of concept of what day World Purple Day in 2018 is.

Furthermore, the event hit stride in Australia where dozens of organizations were found. Many businessmen contribute huge sums yearly to maintain the epilepsy research condition.

What does National Purple Day mean? Firstly, you should search for the illness and read more about the N.P.D. to be in the picture. The reasons and symptoms of the disease are quite interesting to know. Secondly, many events are held yearly to participate in. Grab your friends and relatives to support the day together. Don’t be detached as thousands of people need your hand as a life-jacket. Having an awareness of epilepsy and the N.P.D. you are ready to contribute some money for charitable uses. Thirdly, nobody knows who will be the following guy destroyed by this illness so follow the precautionary measures and give them to anyone surrounding you.

Thus, we can underline the role of Cassidy Megan who started this movement. In 2012, she was awarded for her efforts in creating this day. So, she got Queen’s Diamond Jubilee Medal, a completely rare award as it is given to people who made a huge impact on our world. Also, Anita Kaufmann Foundation obtained the Guinness World Record for the biggest training assembly in 2017. The main target was to train the participants and teach them how to protect us and outward things from epilepsy. So, always bear in mind when is International Purple Day 2018 to stay up to date.

Having considered the issue of the holiday, let’s define the illness itself. So, epilepsy is a nervous system disease, which manifests itself in a variety of convulsive (and sometimes nonconvulsive) seizures, and personality changes. Among the world’s population, the prevalence of epilepsy varies between 0.3 and 0.5%.

Every country and nation have their own traditions and habits. The most powerful traditions are situated in Canada and the USA as these 2 countries started the movement. The first one is to remember what is the date of National Purple Day 2018. In case you have forgotten, just turn back to the beginning of the article to refresh your knowledge and memory. Secondly, join the events held yearly all over the world to show support and respect to this issue. Don’t fail to be moved as such events globalize us to live in a peace. Thirdly, an attempt to help to conduct some money is one of the most important traditions situated according to N.P.D. It doesn’t matter what sum you are ready to donate as the main thing is to make it. Fourthly, our modern world depends on the Internet and social media which are the powerful means of information nowadays. So, support the N.P.D. by posting photos and videos via Instagram, Facebook, Twitter, LinkedIn with the following hashtag.

To sum up, don’t be detached and always keep in mind when is Purple Day in 2018, through the calendar.