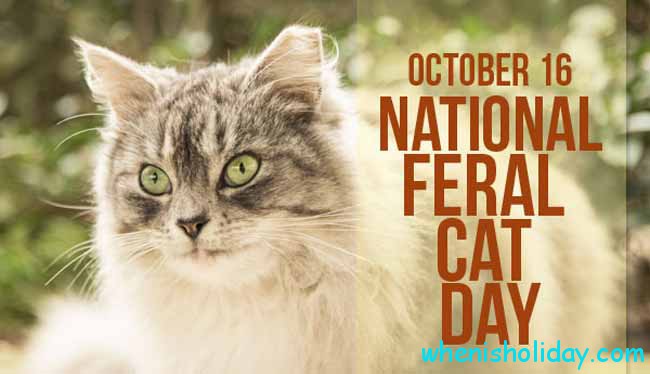 The majority of people can’t live alone. Those individuals who haven’t got any relative or are factually alone try to have a pet at their homes. Nevertheless, the amount of cats and dogs that live outside is huge. They are often killed by people. They can make lots of problems for local communities. The fact is that the majority of people don’t like non-domestic cats and dogs. They often try to get rid of them. Dogs can bring more problems than cats while living in the streets. Cats rarely bite children and elder people. They clean towns and cities from rats and mice. Nevertheless, they need a real help from human cruelty and indifference. There is a special organization, Alley Cat Allies, which proposed to initiate a special day in order to protect cats. When is National Feral Cat Day in 2022?

The history of the day goes to 1990 when a specialized organization was initialized by L. Holton and B. Robinson. It was Alley Cat Allies. These two people found a territory where more than 50 feral cats lived. It was in Washington, D.C. Three individual colonies were to be researched and protected.

Holton and Robinson used a special method of capturing the cats which reflected in trap-neuter-return. The initiators of the group needed money and other help in their case, so they tried to involve other people.

The result was the formation of a big organization which included other people who wished to participate in that work. Since those times the duties of the president of that group have been carried out by B. Robinson. Her companion, L. Holton, left their organization 10 years later. She initiated her own group Alley Cat Rescue in 2001.

In 2001 B. Robinson and her colleagues created a new day, which was called National Feral Cat Day. It immediately became an annual event which later spread throughout the whole world. The main goal of that occasion was to let people know about life and disasters of feral and stray cats. The spread of the day was so rapid that in 7 years more than 30 US cities took part in that occasion. In 2009 there was even a TV show which was to attract the audience’s attention to the problem of these animals. If you ask the majority of cats’ fans across America “What day World Feral Cat Day in 2022?”, you’ll definitely get exact information. It’s on the 16th of October.

What does National Feral Cat Day mean for people who love nature and animals? What does this day mean for cats themselves?

The creatures are free and independent animals. They may be called as outdoor kitties or community ones. People also name them stray or feral cats. They are very strange creatures. American animal rescue organizations accept them as the most incomprehensible creatures.

There are lots of problems with understanding domestic cats who spend the most time of their life with us. They are so independent that sometimes it seems that these creatures let people love them and care of them. The case is more complicated when we speak about feral cats. They don’t need a human control. They live where they want and do what they want. It is a hard case to domesticate them.

This kind of animals is usually unadoptable. They can’t live in shelters. They don’t live alone. These creatures always gather in colonies in order to survive. They even form a hierarchy which helps them to follow the rules of hunting and breeding kittens. Their usual behavior is to avoid a human being. People can’t touch this kind of cats because they always run away. When it is caught, it becomes very aggressive.

Some individuals become semi-feral due to human feeding. They get used to certain places where they can get food. The organizations try to convince the society that it’s very important to help these creatures to survive. The organizers propose to educate children and to give them concrete information about these interesting animals. It is an idea that a feral cat is to be defended but not tortured.

When is International Feral Cat Day 2022? It is always observed on the 16th of October.

The meaning of the term is clear to people who know the facts about cats’ lives. Other individuals don’t exactly understand what the phrase “a feral cat” means and what they should do on the date.

According to the majority of dictionaries the word “feral” explains the way of life of any creature. It is used for those animals that live outside and hasn’t got a home. These representatives of nature aren’t domesticated. They may be aggressive and brutal, so the meaning of the word is mainly ferocious. The word has got lots of synonyms. The most popular one is “a street cat”. Besides, we use this phrase when we want to explain that an animal was a domestic one but later began living outside. According to the lexical practice the last kind is usually named as “stray”.

Moreover, there are several indexes that let people name these animals as feral ones:

What is the date of National Feral Cat Day 2022? It’s always held on the 16th of October. 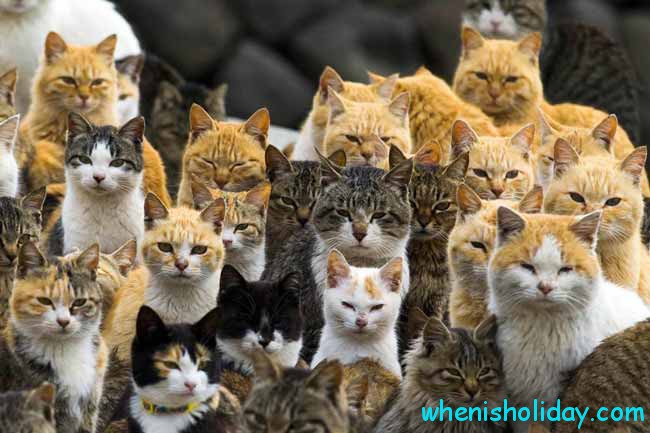 The main goal of the movement was to convince local authorities in America that colonies of these community animals are not to be killed. They are to be taken under control. Thus, the organization proposed various ways of dealing with this problem.

It is admitted that there’re usually more than 300 meetings in various US cities and small towns which are to educate people. They are usually held not only in various educational establishments but also in different communal places.

There is a wide media program according to which newspapers and TV channels are proposed several themes for research and publishing. They are to raise the public’s awareness about street cats.

There are also several programs to help these creatures to be rehomed. They are always protected from the human violence. The volunteers explain that there is no need to kill them. The best way to control their life is to neuter them living them alive.

Due to such wide promotion various communal shelters get a certain amount of support including money and physical help. Volunteers participate in a concrete projects and do certain work. Various events are proposed to local communities in order to promote the occasion. Everybody can get the information about them through the internet “When is Feral Cat Day in 2022, calendar of local events?”

🎢 When is National Roller Coaster Day 2022

👫 When is Husband Appreciation Day 2020