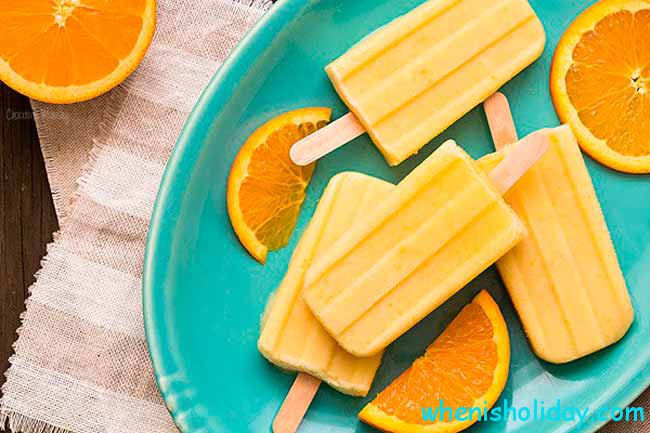 There are eight national days praising the different sorts of an ice cream proclaimed in the US only. And if that wasn’t enough, they’ve come up with another one called Creamsicle Day! One would say, it’s such an utter nonsense setting out the date in the calendar for the ice cream for the ninth time. But we would say, with the warm days coming to a close, we are ought to somehow mark the end of the dessert’s season. So it actually makes sense to celebrate the holiday that happens in the last month of summer.

Anyway, when is National Creamsicle Day in 2022 and how to bid a proper farewell to the frozen delight? Read on!

Speaking on the point of the day when the creamsicle came into our lives, there’s no any documented evidence. What we know for sure is that this sweet treat is a rather late food invention. Nevertheless, the history of its forefather dates back to the beginning of the 20th century. At those times, a little Californian boy of the age no more than 14 years old was playing on the porch on a chilly evening. He had a soda powder in his hand and the water nearby, and somehow the thought occurred to his mind – what’d happen if combining those two into a bowl? As the night was falling, he stirred the mixture with a stick and left it in the same place till the morning. 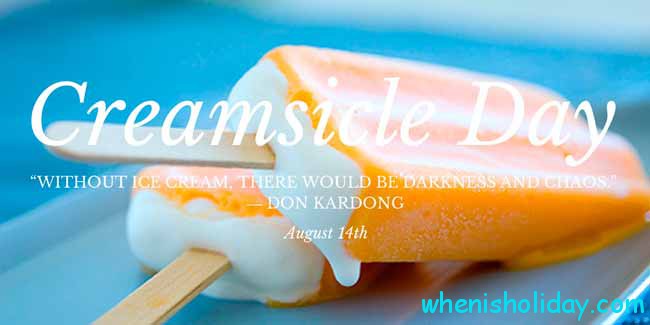 Much to his surprise, the next day he saw at the porch not a liquid but a solid substance frozen to the wood. Letting it melt a bit, he found that the thing was definitely tasty and, moreover, so unusual to eat. Turning 32 years old and settling down to the family life, Francis Epperson (that little boy) obtained a patent on his creation calling it “popsicle”, as his children insisted. The popsicle was a frozen flavored – fruity – water that the people could eat without getting the hands stained. Since then it has had a huge success in the industry of the ice cream writing down the name of its inventor into the history.

Today, the popsicle is a brand owned by Unilever company. It managed to live through the centuries developing the other interesting and appetizing products such as the creamsicle, yosicle and the like. Generally, they are all referred to as the “pop” things because the latter became a common noun for any cold eating served on a stick.

We don’t know who was the first one to have this brilliant idea in their head and when, but they must have been a genius as the creamsicle was really quick to spread its charms all over the world. Big thanks to the man in honor of which we’re going to tell you, when is International Creamsicle Day 2022.

What does National Creamsicle Day mean? It means a happy day full of gustatory joy, sweet fun, and extremely good mood. Why? Because we remember that the process of consuming ice cream entails the burst of endorphins – hormones of the true happiness. Given that we can eat the dessert for the whole day long, we turn into the persons programmed to be absolutely cheerful for at least 24 hours. Or even more, that depends on individual peculiarities.

Putting it simply, the serving of the creamsicle during a sweltering summer at its height means the perfect excuse to hide inside the nearest café and place yourself under the blissful whiff of coolness exhaled by the air conditioner. It’s worth trying no matter what day National Creamsicle Day in 2022 falls on!

The creamsicle is the sort of the popsicle as we’ve just mentioned a few lines ago. However, the latter is also known as the ice lolly on the foggy Albion, the ice block in the lands of kangaroos and the freezer pop among the Irish folk. Thus you are likely to know the thing under you country’s name.

This “sicle” thing with the “cream” prefix is originally a tempting mix of the orange coating and vanilla ice cream filling. But that was before and nowadays we have the widest range of the fruit covering including blueberry, cherry, peach, banana and even watermelon (we’ve counted the lesser part of the assortment!). Although there are myriads sorts of the outer layer, the “heart” of the dish is always the good old vanilla.

Still, even the icon of the dish – the orange with the white – may have the different tastes. The motherland of this mouthwatering sweet – the United States – recommends visiting Florida if you have a soft spot for the thick layer of the orange wrapped around the delicate milky inner part and the Long Island in case you are an aficionado of the ice cream at first not the citrus.

How to celebrate the holiday? Initially, you find out what is the date of National Creamsicle Day 2022. We’ll help you with that task and reveal that it annually takes place on August 14. Then you drop by the grocery store for a heavy box of the creamsicles (one is definitely not enough for such a festive day). For more exquisite experience, you visit the white-tablecloth restaurant and order the serving of the original delicacy garnished with the fresh fruits, berries and all kinds of toppings. On no account spend this sweet holiday alone. Invite friends who are in love with the dessert, too, and organize the theme party with tons of the ice cream, music and merriment.

Anyway, the best possible way to enjoy the dish at fullest is, of course, to make it with your hands in your kitchen. We’ll grant you a recipe, and a quite quirky one. We go against the rules and that’s why our version is called the cucumber-lime-and-raspberry creamsicle. The name itself implies that you’ll need those three ingredients plus the ice cream, milk, honey, and maple syrup. Crush the cucumber in the food processor and squeeze out the juice through the sieve. Press juice out of the lime as well. Combine the fruity liquids with the ice cream in a large bowl and stir it properly, gradually adding the milk, honey and syrup. Prepare the small molds and the wooden sticks. Pour the mixture into the cups and put them in the refrigerator for about half an hour. After those thirty minutes, push in the sticks and let the dessert freeze for two hours. The taste promises to please your taste buds!

However, if you still adhere to the idea of throwing out the party and worry about the insufficiency of the ice cream only, as a sort of snack, then we’ll provide you with dozens of the dishes that are made of this dessert: the creamsicle cheesecake, donuts, cupcakes, smoothies and even martini! Each of the recipes you can look up freely on the Internet. Discover your own option and make the upcoming event really special.

After all, you just need to tick off in the calendar, when is Creamsicle Day in 2022, stock up on the products and warn your near and dear ones to come with the empty stomachs beforehand. Obviously, it’ll be the perfect way to say goodbye to the ice cream season until the next summer!

👨‍⚕️ When is Physician Assistant Day 2022