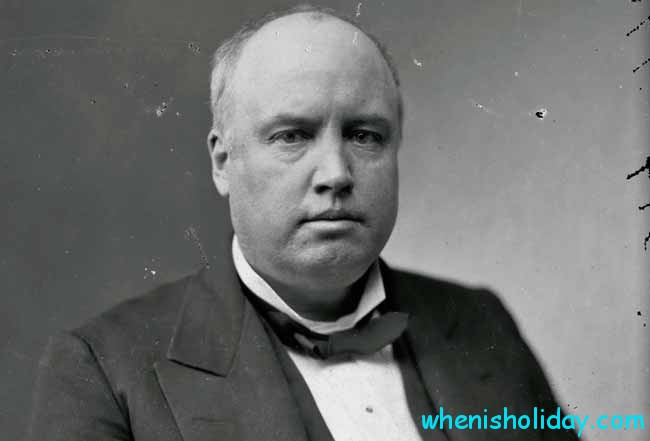 There are many famous and successful people that made an influence on different branches of life. It could be either philosophy and mathematics or politics and authority. Today you gonna get acquainted with one of such undoubtedly influential and well-known people, Robert Green Ingersoll and feast in his honor. So, let’s find out what and when the National Ingersoll Day in 2022 is?

National Ingersoll Day in 2022 is celebrated annually on 11th of August (by the way his birthday) and is held in order to honor and recall the importance and contribution of philosophy, law, and religious studies. The founder of the holiday is a group of his progeny that bear a burden since XIX century.

So, before getting directly to what day National Ingersoll Day in 2022 is, let’s take a few of interesting facts and generally accepted concepts.

R.G. Ingersoll was born on 11th of August 1833 in the town of Dresden (New York), into the family of the Presbyterian priest. The constant family moves from place to place contributed to Robert’s self-education, and constant disputes over religious issues with his father and brother strengthened his skepticism and agnosticism towards religion. In 1852, Robert became a teacher in the school, but soon he was fired for his enlightenment activities and disrespectful statements about Baptism. Six years later he becomes a very successful lawyer. Oratory abilities, successfully used by him in court, brought him the glory of an outstanding speaker of that time, when (from 1860) he began to speak with anti-religious lectures. Appreciating Darwinism, propagandizing the works of Payne and J. Draper, the philosopher devotes his lectures to the propagation of scientific knowledge and criticism of religion and the church.

The philosophical views of Robert Green can be characterized as naturalism and agnosticism. Ingersoll explained agnosticism by the fact that “a person who knows the limits of the human mind … abandons the hope of finding out the first or last reason, to understand the supernatural, or to know the existence of an unlimited personality” (Lectures and Essays, P. 102. Cited by Goldberg N.M. “Freedom and Atheism in the United States (XVIII-XIX century)”).

Considering religions, Ingersoll deduces them out of the man’s desire to live forever, out of ignorance and fear. Gods are created by people and repeat the characteristics of their creators (The Works, Vol.1, P. 7). Considering the variety of man-made gods, Ingersoll emphasizes that the Christian God is only one of such creations: “Some have thousands of hands, others have hundreds of heads .. some turn into people, some turn into swans, some in bulls, some of the pigeons, some in the Holy Spirit, and surrender to love with the beautiful daughters of men “(Ibid., P. 8).

The Bible, according to Ingersoll, is a book “full of episodes equally terrible, unjust and cruel” (Ibid., P. 14). It must take its place among the “Sastras, Puranas, Vedas, Eddas, Sagas and Korans” (Ibid., P. 56). Religious faith is “an unsuccessful mixture of insanity and ignorance” (Ibid., P. 16). The earliest form of religion is the worship of “savages idols of wood and stone” (Ibid., P. 39). Changing the forms of religion connected with the gradual accumulation of knowledge about nature according to Ingersoll, while he accepts the concept of the evolution of religion from lower forms to more complex ones. From faith in idols, a person goes on to belief in spirits, then the number of these spirits decreases to one.

Gradually the idea of a single God becomes more and more abstract, there is a belief that God only created the laws governing the universe. However, deism, according to Ingersoll, is as erroneous as theism: “He who can not reconcile the cruelty of the Bible with Jehovah’s kindness can not reconcile the cruelties of nature with the kindness and wisdom of the supposed deity” (The Works, Vol.11, P 227).

R.G. Ingersoll is one of the key figures of American freethinking. He, according to the apt phrase of S. Jacoby, “built a bridge between the theoretical deism of the Enlightenment and practical free-thinking, concentrating on social problems” (Jacoby S. Freethinkers: A History of American Secularism, p. 176).

Knowing what does Ingersoll mean will help you to understand the sense of a holiday. So, when National Ingersoll Day in 2022 will be held, the main principle is to recall the knowledge and honor the proceedings of the celebrity. Furthermore, you are able to visit Ingersoll Sound Museums that are located in the USA. Also, since 1892 a manufacture of watches Ingersoll has been started and you may like some models and buy a modern one, thereby respecting the philosopher’s importance.

By the way, Robert has written many works in different spheres so that many objects nowadays possesses his name: watches brand, museums, towns, parks etc.

So, you should just keep in mind the name of the celebrity and honor his contribution to science and other branches of our life.

The American calendar remembers when is the National Ingersoll Day 2022 and asks us to celebrate it with those who cannot live a day without finding out something new. The possibilities of the feast party are numerous. Let us name some of the most useful:

Generally speaking, such festivals as this one are not interested in having any traditions of celebrating. Instead of the template, you’re welcome to create your own schedule and manage your day time as Robert did it.

As it was told above, you’re not limited in actions and it’s highly recommended visiting the places the celebrity has been to and find out something new for yourself and your own spirit in his works.

If you managed finally to visit the Town of Ingersoll then we would help you in such rather complicated issue:

Well, each holiday requires its celebration which completely depends on you. So, always keep in touch and follow your traditions and rules because your life – your rules.