Maasdam, Camembert, Dor Blue, and Coulommiers… if you’re drooling over the keyboard when imagining those, then there is a day in the calendar for your enjoyment!

When is National Cheese Lover’s Day in 2020? We badly want to find it out, too!

The cheese, so much-loved and so respected, has an interesting and quite a long history of its existence, justlikethewayofmakingit.

There are dozens of the legends that tell about the food’s origin. Perhaps, it was a curious man who watched for the milk for a while. Probably, it was an utter accident. The world doesn’t know for sure but we do have some theories. One certain thing is that the forefather of the today’s cheese was invented in the lands of the Middle East at least seven thousand years ago.

So the first “Arabic” story is this: a merchant traveled all the way to the neighboring tribe which was located far away from his home. Hetook the milk and some foods to eat but the weather was so hot that he stopped for quenching his thirst. However, instead of milk, there was the salty liquid seeping from the bottle and at the bottom, he found the thick white clot. In fact, at those times, the merchants used the flasks made of the animals’ stomachs. Thus due to the ferment the deliciousness was formed and quite a tasty one. Our merchant tried the clot and was satisfied. He shared the invention with his congeners and soon the secret of the cheese making became known to a great many tribes.

The “Greek” version sounds like the fairytale. Artemis the Goddess gave the recipe of the food to the grassroots. It was her who taught the people to accompany the wine with this heavenly product. Even the Gods indulged in the slices of the treat washing it down with the selected wine. More than that, some religious rituals used the milky deliciousness as part of the worshipping of the Gods. It is known that the population of the Cretebrought it as a sacrifice while the Athenians were prohibited from trying it as they were sure of the habit-forming nature of the thing.

The “Roman” legend goes like that: they believed that this product was essential for the good digestion and could even be used as the antidote! The food is often mentioned in the ancient literature’s masterpieces such as the Odyssey by Homer, Natural History by Pliny and many others. Some think that the Roman Empire brought the period of the real flourishing of the cheese making.

Although it was closely connected to the cloisters, the treat wasn’t that popular in the official religion. In particular, as the sacrificial offering to the legendary Heracles, there was the sheep sort of the product. Also, in the ancient times, it was the most widespread product made of the milk. The milk fat was used for the medicines and ointments and the olive oil was used for the food making. Looks like it played an important role in the life of the ancient folks!

How come that the thing got so popular that today we ask, when is International Cheese Lover’s Day 2020?

In the 11th century, France invented the Swiss cheese (sounds weird) and the Roquefort. A century later, there was the Gruyere in Switzerland and the Cheshire in England. In the 14th century, Italy came up with the amazing Parmesan, Sbrinz, and Gorgonzola. In a while, the cheese making spread all over Europe with the centers of the production located in the cloisters.

The monks of the many countries got interested in this treat and due to this attention, the wide range of the treat’s sorts became even wider. The cheese then was salted, baked, spiced up and even provide with the mold.

With that craze about the product, could you imagine that it was actually announced as the health detrimental thing in the times of the Renaissance? And it prevailed for quite a long! Only in the 18th century, the hero of the article was discharged of any mean accusations. A dozen of years on, it entered the industrial production. The first who made those famous big rounds of the cheese was Holland which turned it into one of the main sources of the country’s budget since the 14th century.

What does National Cheese Lover’s Day mean? It means reveling in the delicious experience for the whole day long while you can.

But why it is so much-loved and adored? Let’s delve into the “heart” of the food and uncover the secret of its popularity.

First, the one-third of it is the pure protein which allows us to substitute it for the meat products and even use it in the vegetarian menu. Second, the milk far, contained in the food, increases the overall number of the calories yet contributes to out digestion. Third, it doesn’t have any carbohydrates so there’s nothing to be afraid of even for the dieters. Instead, it has a lot of the vitamins and minerals such as the B group, retinol, ergocalciferol, calcium, phosphorus, and zink.

Regardless of what day World Cheese Lover’s Day in 2020 falls on, eat it a bit more often than once in a year! In fact, the holiday can be celebrated on every day of the calendar. 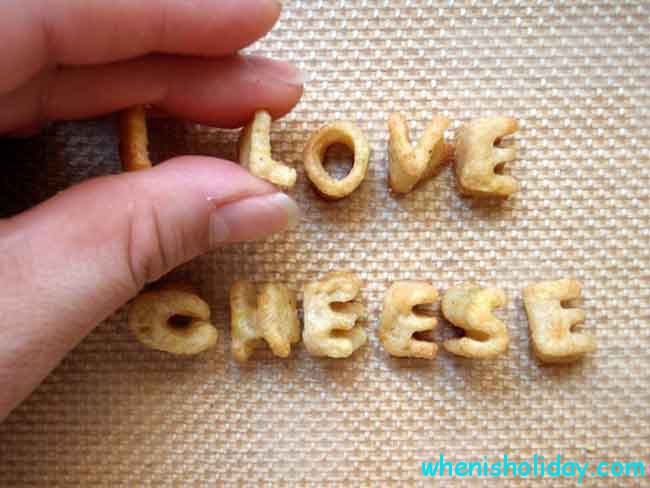 The maximum of the healthy qualities of the milk, during the treat’s making, is preserved due to the thorough adherence to the canons of the process. No matter what milk is used, be it the cow or the goat or the camel, it is located in the warm place for the curdling. Then, the cheesy mass is separated from the liquid and the maker adds some spices and other ingredients that spruce up the taste and the flavor. In this moment, the famous holes are formed as the result of the fermentation of the gas bubbles.

After that, the stage of the aging comes. For that purpose, in the special rooms, it undergoes the various manipulations such as the turning, rubbing with the alcohol, sprinkling with the spices, baking, washing with the brush, etc.

The hard sorts, the Parmesan or Cheddar, contain the minimum of the liquid so they take much more time to age, up to several years, yet they could be stored also for years. These ones have an amazing feature of destroying the bacteria in the mouth of the human, providing the fresh breath and the white-teeth smile. The semi-hard sorts, the Maasdam and Gauda, have the lesser keeping time. They are easy to cut, contain more water and are full of the calcium. The soft sorts, like Brie and Camembert, have even more level of the liquid inside, the creamy structure and the very short period of storage. They are the best products for the organism’s cleaning, especially if you are on a diet.

What is the date of National Cheese Lover’s Day 2020? It annually occurs on January 20th!

What is the best way to celebrate the holiday that clearly states that it’s all about the cheese and its die-hard enthusiasts? Of course, by making yourself a bigger fan of the product.

Go for the most delectable, the most exquisite sort of the food, be it the usual Mozzarella or the pretentious Pule. Enjoy it as you’ve never tried it before (with Pule, which is the most expensive sort in the world, it might be true) and thank the higher powers that bestowed the mankind with the recipe of this pure deliciousness.

So, mark in the calendar, when is Cheese Lover’s Day in 2020, and be sure to make your day a tad more… cheesy!

When is National Pistachio Day 2020

🛋️ When is National Organize Your Home Day 2020