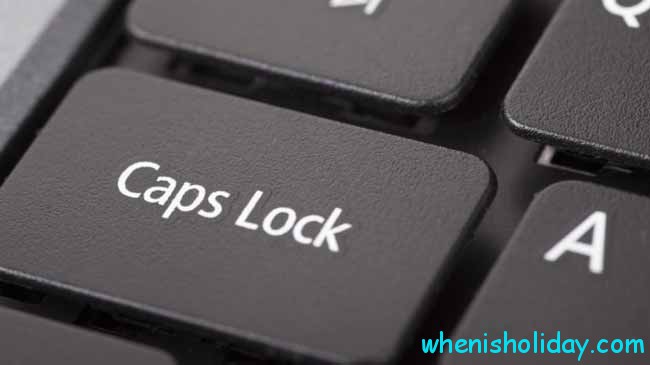 When is International Caps Lock Day in 2022? Can you answer this question or perhaps you need some time for recollecting? It’s a pity, but in most cases contemporary men and women are not able to do it even if you give them much time for thinking about.

And that is the main reason why we have made a decision to discover this matter in details.

Certainly, we understand that nowadays it is almost impossible to give the proper answer to the question “When is International Caps Lock Day 2022?” without paying attention to the historical background of this amazing special occasion.

Unfortunately, we haven’t been able to find out any suitable information about the establishers of this notable date as well as about the reasons to celebrate it just on October 22.

However, as you probably know the pressed CAPS LOCK key turns all lowercase letters to uppercase and back. Initially, this was done for people who for some reason are forced to type the text in large letters and experience discomfort, constantly holding Shift for this purpose. However, after the massive spread of the Internet, the use of this key has become ever the same as a loud scream in a conversation. Often in chat rooms and on forums, people who constantly write in capital letters receive in reply replicas of the type “DO NOT BE ANGREE WITH ME!”

Believe you or not, but in 2001, a real public campaign was launched in Sweden against the CAPS LOCK key. The activity was performed under the leadership of Linus McCabe, the founder of www.anticapslock.com. The purpose of the action was to force computer manufacturers to remove the ill-fated key from the keyboard altogether. After a while, the campaign was supported by the Brussels-based Peter Hintzens, who created the site capsoff.org. “The CAPS LOCK button is ugly,” he said, “Of course, we have something to do without this, but add up the millions of small disappointments accumulated over the decades, and you will realize that the CAPS LOCK key is a sick subject.”

The struggle with CAPS LOCK is still going on, and the haters of the ill-fated button have already announced a contest for the design of the “keyboard of the future”, on which CAPS LOCK, of course, will not be.

What does National Caps Lock Day mean? Of course, in most cases it is up to you to decide, whether this keyboard button is important for you or you can think about it only in the case you are working with various documents and serious texts.

All in all that is a really amazing part of contemporary texting and now we will explain you why. – The matter is that among modern ladies and guys there are a lot of those, who get angry with seeing the capital letters in sms, social networks or messengers. Another part never bothers.

Nowadays the world day of the key CAPS LOCK is nothing but a funny special occasion which can be spent in definite societies.

At a time when people were still actively using typewriters, they had to press Shift key to set the headers. This was done, of course, for much convenience.

In order not to keep the Shift key pressed, some typewriters even used a special key. When computers appeared (even those with a keyboard built into the computer), there was a Shift Lock key, which performed the same function, the button did not sink mechanically, but performed its function at the system level already.

Then the key was renamed to “Caps Lock”, which in English means “Capture capital letters”. In our attempts to give the answer, what day National Caps Lock Day in 2022 is, we can’t but mention the paradoxically contradictory reputation of this key in the world of cotemporary texting. You see, the arguing about whether it is needed on the keyboard has been by users since the moment of its appearance.

The more people bought a PC, the more accidentally pressed the Caps Lock key. Now the Caps Lock key has become an object of hate for many users. By the way, believe you or nor, but this button using is banned in many forums.

When is Caps Lock Day in 2022, calendar is always ready to remind you, however, do you know how to spend this unusual special occasion properly? No? – We will help you then.

But at the very beginning we want to mention that all in all there are no any special customs and rules for this purpose. Are you disappointed? Please, don’t do it, because if you are really going to keep October 22 in a good way, you can always invent something special and involve all your friends, relatives, family member and even colleagues from work into exciting celebration.

Start with the simplest essence. – On this day, ostensibly, you can write in CAPITAL LETTERS as much as you want. But, unfortunately, nobody guarantees you the absence of warnings from admins of different forums. In practice, these serious men and women don’t usually appreciate this method of communication even if you remind them about the holiday. 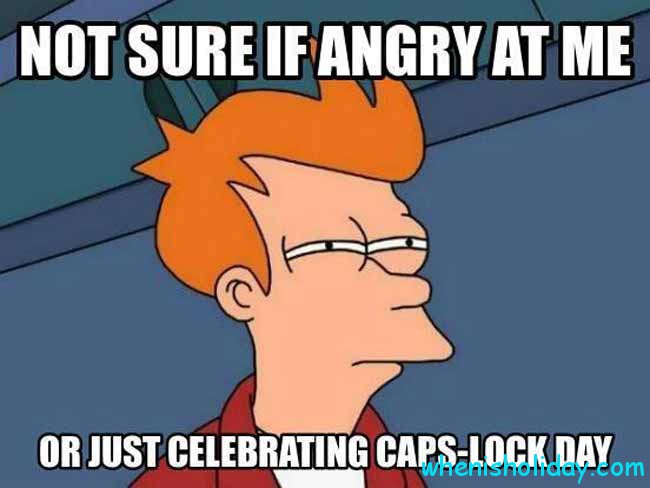 The idea of this holiday celebration was initially suggested by D. Arnold, who was an active user of the collective blog called MetaFilter. It happened in 2000. Nowadays you can even find the special site capslockday.com that is dedicated to the holiday. This sector in the global space has one distinctive feature. – All the news there is written by capital letters. What about visiting this place on October 22?

Some people like organizing parties this day. There are a lot of things to do. You can write different posters (in capital letters, of course) and stick them on the wall, or to share small gifts with postcards.

The perfect idea will be to visit special calligraphic courses and make a lot of fun there.

So you have already known the answer to the question “What is the date of World Caps Lock Day 2022?”, however there are a few amazing pieces of information about October 22 and we would like to introduce you some.

When is National Weed Appreciation Day 2020

🛌 When is Fight Procrastination Day 2022