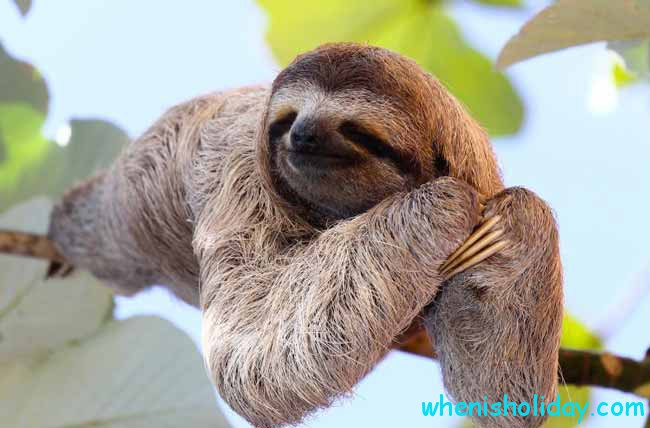 You remember that amusing creature called Sid from Ice Age animated movie? You must have thought that all the sloths are just like Sid… Meanwhile, they are not!

Let’s find out together when is National Sloth Day in 2022 and what are the real sloths like!

The modern lazy mammals were spotted only in the 16th century. Around 1530, the Spanish historian and naturalist wrote a pretty unflattering note about them in his book, after seeing them in the Peruvian forest. In a nutshell, he called the sloths the harmless, useless and dull animals that spend their time hanging on the trees.

In fact, this was quite an offensive remark just because the ancestors of the creatures – the elephant-size sloths! – came into this world together with the primitive man. Those giants lived almost forty million years ago and were six meters high and weighed a bit heavier than a few tons. Comparing to the dinosaurs, these fellows were equal in dimensions. Of course, they weren’t glued to the trees, as their descendants today, because of their huge body mass, so the ancient sloths lived on the ground. According to the excavations, they disappeared after the Ice Age had come (the real one, not that from the movie).

However, we witness them nowadays, safe and sound, and we are lost in conjectures on the point of how did those passive beings manage to make it through the centuries? The scientists were long sure of the sloths being too defenseless in the face of the other living hazards such as the snakes, ocelots, and birds of prey, and foretold the impending extinction. But the prognosticators replace each another for years while the furry mammals still hang on the branches. Well, the answer lies exactly in their incredible sluggishness. The evolution made those species so talented in leading the perfectly slow life!

Nevertheless, they are vulnerable in the face of the modern human who cut down the forests destroying the creatures’ habitat. That’s why the organization named Ainau Foundation, specializing in saving, nursing, and rehabilitating the anteaters, sloths, and armadillos, set aside the date for raising awareness about these funny animals. Since 2010, it annually stages the events and promo activities to praise the sloth and educate people on the point of the mammal’s way of life.

Why does it matter to know when is International Sloth Day 2022? Because despite their seemingly meaningless existence, the creatures have much to boast about!

What does National Sloth Day mean? It means recognizing and appreciating the fact that we have the sloths in our world.

Frankly speaking, the good the creatures do is minimal. They don’t eat the poisonous plants or catch the vermin. On some territories, people actually eat their meat which taste and smell are awful (why’d they do that then?). The rugged and hard skin of them is used for making the coverings and the sacks. At the same time, the fuzzy mammals do no harm at all. They live only in the distant forests and go on their existence until the merciless ax of the man cut down the trees that give them food and roof.

Sometimes, people thought that the sloth would serve as the perfect pet as it eats the leaves, can do without the latter for a month, spends its days up in the air, do its business once in a week and smiles all of the time! But, in a while, the locals gave up on that idea because it is not only the laziest one but also the silliest one.

Nevertheless, the sloth has the symbiotic connection with the pyralid moth and the algae. The preserving of the life of those depends on the monthly slowness of the animal. As it moves so rarely, its fur gets covered with the algae and fungus.

The leaves that the sloth eats up don’t contain many calories. Thus it desperately needs to save the energy and be energy-efficient. The dirty coat attracts the moths that provide food for the algae and bring the nitrogen which helps spread them. Although the scientists do not know how the moths do that, they suspect that the nitrogen they supply comes from the poop of the sloths themselves.

Regardless of what day World Sloth Day in 2022 falls on, recognize the fact that the nature provided for the every creature on this planet, even for the laziest one!

The sloth is the mammal from the Edentata family living on the South American continent. The forests of the Argentina, Uruguay, and Honduras are the places where you’re likely to meet them most. Their closest relatives are the anteaters and armadillos.

There is not that much of the specimen as the world knows only five species of the animal that are divided into two groups – the two-toed and the three-toed sloth. All of them look alike. They have medium-sized bodies of around fifty centimeters long, the shape of which reminds of the monkey – long limbs, strong claws, and small head. The fur is thick and long (and very shaggy!) that’s why they might be taken as the hay cock. Almost every organ of the sloth is not like that of the other mammals!

First, the teeth are the primitive, without the roots and enamel. On top of that, they are all of the same shape and size. The brain is small and not so complicated because of their unusual way of life. The creatures eat, sleep, breed, and die in the crowns. They move through the branches in the hanging position due to the extremely long and strong fingernails.

That’s why they are not able to be quick and agile – they cannot jump, swing on the trees and swarm up the trunks. The speed of the moving animal can amaze every person! It does everything in its life like in the slow motion movie – it slowly turns the neck to look behind, slowly lets go of the branch, slowly moves the limb, slowly chews the food… In fact, putting the speed into the numbers, it is about several meters in a minute. Besides, they are the great fans of sleeping, the process of which takes at last ten hours a day. 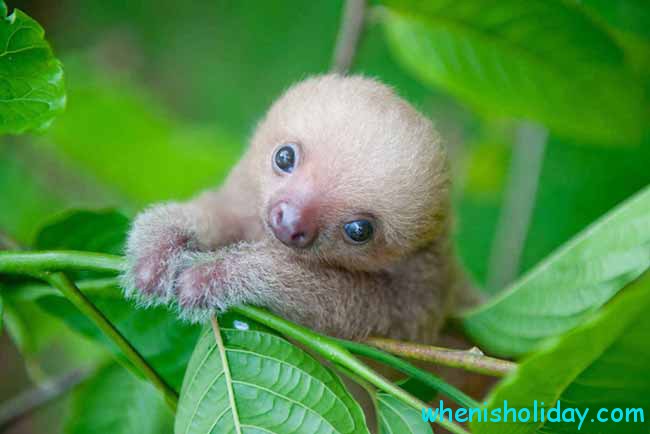 Yet the most amazing fact is that the sloths do not ever defecate on the trees, as opposed to the other tree creatures. To do its business, every sloth goes down from the tree to the ground. By the way, the descent is actually a risky venture for the mammal as it literally poses the threat to its life. They can easily slide off the tree and fall on the ground, dying instantly. Now you understand their habit of performing that deed once in a while? Interestingly, having done their dirty business, they bury the poop just like the cats!

Hold on, we have one more feature of the animal to surprise you with. They can do one thing really quick. And it’s…swimming! It is hard to believe but the sloths are the skillful swimmers.

Well, you can celebrate the holiday in several ways.

You have the chance to find out more about these awkward fellows and their mode of life.

You can visit the zoo if the one exists in your neck of the woods, and probably you’d see the hero of this article in person.

You are strongly encouraged to donate to the organization that protects the sloths. When else if not on October 20?

And the way that takes the least amount of energy is to be like a sloth! Spend the whole day in the bed with some pizza by your side and the favorite shows on.

Mark in the calendar, when is sloth Day in 2022, and take your time drifting along this life on that date!

A day of food on a stick