Food holidays are more acceptable to people than events connected with a country. These days usually provide a great variety of observances connected with cooking and eating products. Such events are usually supported by restaurants and cafeterias which propose a great variety of meals in the menu and a certain amount of sales. One of such food days is devoted to a carrot which is an ingredient of many recipes. When is National Carrot Day in 2020? What are the best ways of carrots’ usage?

The holiday was initiated in 2003. It is supposed that the idea came from Central Asia. The event was set to attract the people’s attention to the great variety of kinds and tastes. The internationally accepted kind has got an orange color. Carrots have many nutrients and can be used in many meals. The event was so interesting to people that it had gained his international value till 2012. That year the observance was held in many European countries, Japan and Australia.

Originally the vegetable wasn’t domesticated. It grew in the Persian territories. Nowadays this area is also full of the ancestors of domesticated species. The wild subspecies are bitter and small. Plant selection breeders have developed new species which are more habitual for gustatory qualities. It has become sweeter and gentler. The result of their work is nowadays used by every cook. 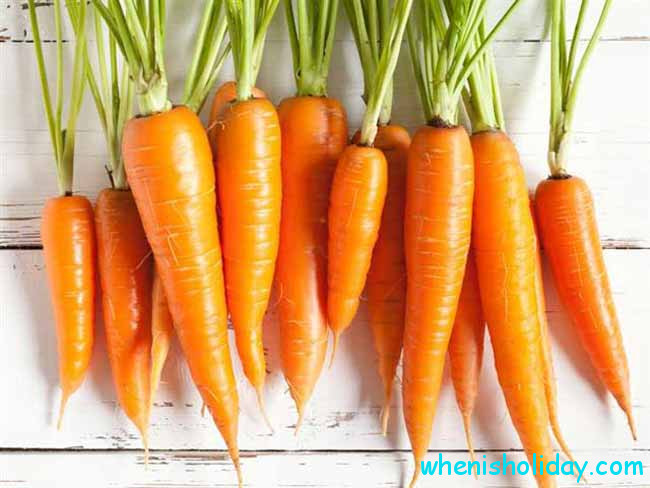 At first people cultivated carrots to use their seeds and leaves which were very aromatic. Roots weren’t eaten. Historians can prove the presence of this species on the 2 – 3 Millennium BC. The found seeds can be dated to those ancient times. Some of carrots’ relatives are nowadays used for leaves and seeds. They are cumin, fennel, anise, coriander and many others. The first use of roots is supposed to take place in the 1st century AD. The Romans were the first to eat them. The root was depicted in a treatise of the 6th century which numbered different species of this vegetable.

The spread of this root throughout the world wasn’t steady. The Spanish territories began using carrots in the 700s. The Chinese cooks could cook the modern variant in the 1300s. The Japanese cuisine got the ingredient in the 1700s. The dwellers of the American continents were acquainted with these vegetables in the 1600s. The first species had a purple color. Only three centuries later people started using yellow and purple carrots. The purple species with orange flesh appeared in stores in Britain in 2002. The best way to get information about the vegetable is to find out what day World Carrot Day is and celebrate it. It’s held on April, 4th.

What does National Carrot Day mean? The event hasn’t got a great value, though thousands of people observe it. They don’t need special preparations for the holiday. The need of the event was obvious. Despite the serious nutritional contents this vegetable isn’t one of the most favorite products.

The vegetable carries lots of vitamins and nutrients. The main component is beta-carotene. Two carrots are enough to provide an adult with a daily dose of vitamin A. It is very useful for the human’s eyesight. If you have a nyctalopia, it means that have to eat more carrots.

Nutrition experts insist on the need of usage of carrots for people who suffer from different kinds of diabetes. The most suitable variant is a boiled variant. It contains 34% of antioxidants more.

The vegetable is able to lower the cholesterol level. Eating carrots a person can prevent heart attacks and insults. High blood pressure can be lowered too. The appropriate portion of carrots can become a preventive measure from cancer. It also can stop the growth of cancer cells.

Women should certainly eat carrots. These vegetables are used in cosmetology. Lots of different kinds of cream are made of this ingredient. It prevents wrinkles and disinfects the skin. Carrot juice can treat septic wounds and burns. A plate of salad improves digestion.

The importance of carrots is obvious to many adults. The holiday is high time to explain the need of these vegetables’ usage to children. When is International Carrot Day 2020? It’s on April, 4th.

The name of the observance doesn’t need to be explained to the majority of people. It means that when you hear about the occasion, you don’t feel any hesitation as to its observance. Men aren’t the ordinary followers of such observances. Women are always ready to hold the tradition of celebrating the event. The followers of the event live throughout the world. They have their own traditions of celebrating the event.

The word has got several definitions. The main one means an herb which is usually orange. The edible part of the vegetable is a root. The term is also used to describe an advantage or a reward which is offered by a company. It is rather an inducement.

The appearance of the word took place around the 16th century. It isn’t an originally English term. The word came to English from Middle French. The original form appeared in Old English. Later it was borrowed to Greek and Late Latin.

The word is interesting due its derivation to many languages. The words with the same meaning have the same root.

What is the date of National Carrot Day? It is celebrated on April, 4th. 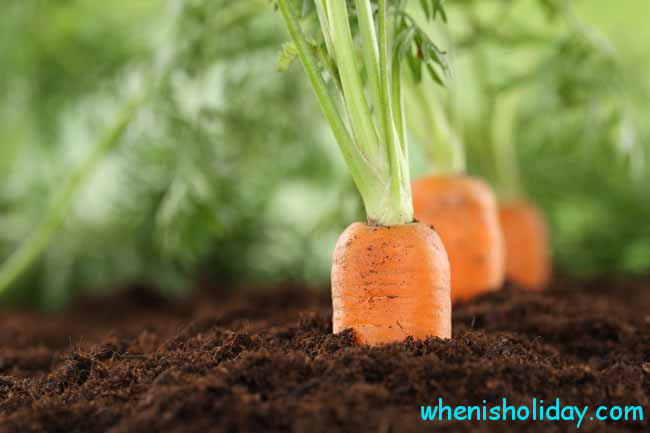 The observance is traditionally held in different ways. The main thing of the date is a carrot. The followers of the tradition obligatory eat carrots. It can be eaten uncooked or boiled. There are many recipes in cuisines of many countries.

The vegetable can be a part of a complicated meal. It is simpler to eat such food as children and adults often don’t like the taste of a boiled carrot. Carrot juice for breakfast is a great way to start this day. It is nutritious and fresh. The color of the beverage can bring pleasant feelings and mood to a person. It is a sunny product.

A carrot cake is another favorite food for people of many nations. There are lots of recipes of the product. Some of them are so easy to cook that even a child or a teenager can manage it. This cake is to become a great surprise to parents. Carrots can also be used as a theme of decoration of desserts. The simplest way is to make these vegetables and a rabbit of a marshmallow fondant.

A carrot party can entertain adults and children greatly. Costumes and food made of this vegetable can make every party breathtaking and memorable. The obligatory place to visit during the event is the World Carrot Museum. There’s no need to go anywhere. The museum is virtual. Find the information about the observance of the event in the internet, “when is Carrot Day in 2020, calendar”. It’s set on April, 4th.