The Internet now is the essential element of our everyday life. It seems like if this lifeline once collapses, the whole world would stop. Humanity would get very sad about not being able to look at the pictures of the kitties, chat with friends, and google the things unbeknown to them. In a sense, it’s like the scene from the apocalyptic movie!

Considering the importance of the world web for each of us, do we know when and how it was invented? In fact, barely five out of ten people can answer the question. This definitely needs to be fixed. When is National Internet Day in 2022 and who are the persons to thank for being able to reach your mom, who travels to Thailand, in a second?

The history of the mighty internet began at the end of the 50’s. At the peak of the Cold War, the United States was concerned about the military telecommunications being too vulnerable in the face of the impending conflict. They wanted the one that would survive even the nuclear blow.

The ARPA agency responsible for introducing the new technologies in the US military offered to use the computer network that would be functioning even if several of its nodes were destroyed. The project was given to four researching centers based in the universities.

The future virtual thing was underlined by the technology of the American engineer called Leonard Kleinrock according to which the flows of data could be divided into the packets and their following transmission could be performed via the network with the alternative paths between the two nodes.

The first experiment was carried out in the fall of 1969 and it was successful. Two computers were placed at the distance of six hundred and forty kilometers from each other. The first operator in LA was to type the word “login” and the second one in Stanford was to confirm over the phone that the word appeared on his screen. At 9 pm, the first try was half performed as only the two letters – l and o – were transmitted before the system crashed. An hour later, the attempt was repeated and turned out to be successful. Thus how the Internet – back then called ARPANET – came into this world.

However, there was nothing slightly similar to the net we use today. Yet the development was really quick. With time, it served not only the military but also the key universities of the country. In 1971, the prototype of the modern electronic mail was invented and several years on, the network crossed the ocean. In 1983, the Internet protocol suite was standardized and five years later, we got that thing called chat that is the process of exchanging the texts in real time.

There are not only those people involved in ARPANET that we can praise for having the opportunity to ask today – when is International Internet Day 2022?

America gave the push for the Internet to be born yet the idea of the World Wide Web was voiced in Europe. Tim Berners-Lee is the father of the HyperText Markup Language, URL, HTTP and the like. His works became the breaking point in the WWW history.

In 1991, the web was open to all the interested yet there were little of those due to the absence of the handy tool for surfing the net. However, in 1993, the world witnessed the first really popular browser that could show not only the text, lists, and tables but also the pictures. Mosaic – that’s how it was named – drew a good many users to the web and served as the starting point for the following growth of the myriads of the websites, search engines, and all that we have now in the virtual space.

What does Internet Day mean? It means to show your appreciation and acknowledgment towards the people who invented it and also to ponder over the possibilities it has bestowed us with.

Why do we need the WWW? First, to pass and receive the texts, messages, documents, graphics, music, video, etc. In a nutshell, to perform the productive communication with our partners, colleagues, friends, and relatives regardless of the distances between us. Second, to get access to the billions of the reference books and all sorts of information. Where else the students would get the sources for their paperwork? Third, to be always in the know on the point of the worldwide and local news and events. Fourthly, to create, perform and use the processes and technologies of what we call B2B, B2C, and C2C that let us carry out the banking operations, partake in the exchange tenders right at home, buy and sell everything we need through the online shops.

In the fifth place, thanks to the Internet, we can communicate with the like-minded people and be the cosmopolites. Sixthly, we have the opportunity to get education distantly in the other country not leaving your motherland. We are able to perform the online consulting, advertise, and put up our own website. On top of that, the virtual space became a rich ground for earning real money. Does anyone have any questions about why we need the web?

Regardless of what day Internet Day in 2022 falls on, we’re sure you often thank its founders as it literally saves our lives each day.

The Internet is hard to log out of. All those social networks, forums, blogs, YouTube… We think everyone has once experienced that – the feeling of not being able to cut the connection. No matter the obvious benefits the web provides us with, there are also the myths that millions tend to believe. 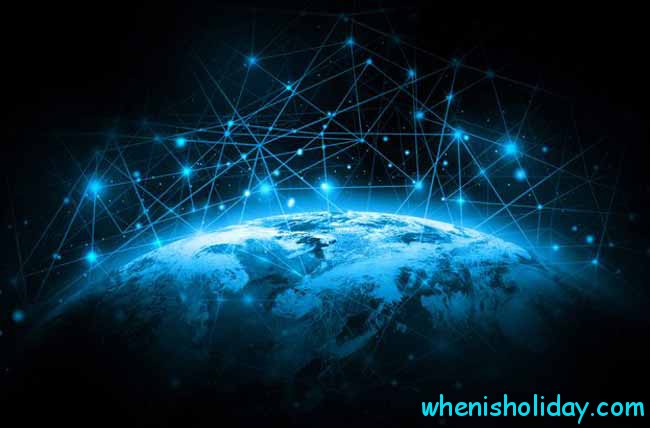 Probably, the celebration of this holiday is the most undisturbing one as it doesn’t involve any preparations or mass loud merrymakings.

Just delve deeper into the history of this wonderful invention that drastically changed the way we lived. There are much more landmarks and details that we couldn’t put in our article.

You also have the chance to visit the very first website! Just google the words – the first website – and look at this so sophisticated and graphically interesting page. Wait, how come you didn’t like it? At least, show respect to the most ancient thing on the net.

Of course, there’s an option of reveling in the untroubled time surfing the web, listening to music, and admiring those furry kitties playing with each other.

Mark in the calendar, when is Internet Day in 2022, and enjoy this handy invention to the fullest!

International Day of Equality at Work