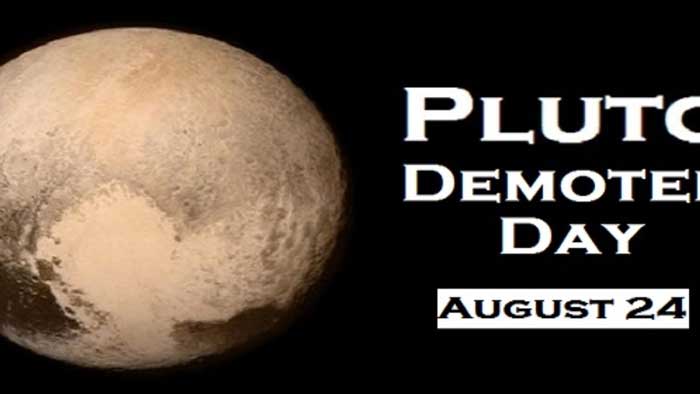 When is National Pluto Demoted Day in 2022? – Well, to tell you the truth we are almost sure that the most part of our followers has never heard about the existence of this special occasion in the contemporary calendar. Are we right? – If it is so, we should not even expect for your reply to this question. However, we find this occasion to be an interesting one, so we are going to represent it to you. Are you ready to find out something new and amazing at the same time? If it is so, join us, please, we are starting.

The matter what day Pluto Demoted Day in 2022 is much more terrific than it may seem at the first sight. It involves a lot of interesting facts. As a rule, our followers are glad to know something new about the historical background as well as about the establishers of the special occasions. And today we have managed to find the facts for you.

Everything started not a long time ago, when in the Philosophical Society of Washington, DC, USA, a debate was held between New Horizons mission scientific director Alan Stern and former President of the International Astronomical Union (IAU) Ron Eckers on what to call a planet.

The subject of discussion was the formal definitions of a planet and a dwarf planet, adopted by the XXVI IAU Assembly in August 2006. Then, after the decision approved during an international conference, Pluto, to which the New Horizons station went in January 2006, began to be considered not a planet, but a dwarf planet, with which Stern did not agree.

Pluto, officially stripped of its planetary status in 2006, cannot be called a large celestial body. Its diameter is one and a half times smaller than the Moon, 5.5 times lighter, and the entire surface of the dwarf planet is slightly larger than the area of Russia.

The gravity is so weak there that the basketball hoop would have to be hung at a height of about 45 meters – and it would still be possible to jump to it.

What does Pluto Demoted Day mean? – Well, we are not sure whether this occasion means something for you or it doesn’t really matter. In the modern calendar, there are a lot of dates and we are free to choose what to celebrate and which ones to forget completely and without any hesitations.

Following the IAU, the important difference between an ordinary planet and a dwarf planet is that the first has managed to clear the own surroundings from foreign celestial bodies, while the second one has not.

This classification is supported by several quantitative criteria, from which it directly follows that Pluto cannot be considered a planet like, for example, Earth or Jupiter. In the discussion of scientists, special attention was paid to one of these proposed criteria, namely, presented in July 2015 in a publication by astronomer Jean-Luc Margot. The specialist was an honored member of the University of California at Los Angeles (USA).

According to the work of this scientist, in order to check the status of a planet in a satellite of a star, it is enough to know three parameters: the mass of the star, the mass of the satellite and the period of its revolution around the star. Margot’s method takes into account the time it takes for a celestial body to clear its orbit around the parent star and is applicable to exoplanets.

In fact we can’t answer the question “When is International Pluto Demoted Day 2022?” without the representation of some amazing pieces of information. Without them the reply will be not clear and boring at the same time.

Trying to see it from Earth with the naked eye is like trying to see a walnut from a distance of 50 km. It sounds impossible, doesn’t it? – Well, it is true! We should not even try to do it in practice.

At the same time, it should be mentioned that there is much water on Pluto. In fact its amount is much more than three times more than in all Earth’s oceans. The huge glacier, covering almost a quarter of the planet’s surface, is very heart-shaped in shape.

The people, who want to know as much as possible about the surrounding of our planet, would be amazed to find out that in practice this celestial body is best seen in a 2015 photograph taken by NASA’s New Horizons robotic probe, the only spacecraft that ever approached Pluto.

It was launched in 2006 and traveled to the icy planet for nine years, covering 3 billion km. During this time, Pluto had two more satellites discovered (in addition to the three already known), which almost jeopardized the mission.

By the way, we can’t but mentioned that on board of the station there was an urn containing part of the ashes of Clyde Tombaugh, the man who discovered Pluto in the 19th century.

When is Pluto Demoted Day in 2022, calendar will surely remind you. The special occasion have a fixed date of its celebration, so it won’t be difficult for you to memorize it. In fact it has happened regularly on August 24th since 2006, when it was decided to consider Pluto to be a dwarf, not an ordinary, planet.

Unfortunately, as you perhaps understand there is no need to expect that the local authorities will organize something special devoted this occasion. As a rule, they do not even know about its existence. However, you may visit a museum or a planetarium. As a rule, they organize numerous lectures and seminars devoted to this theme. As a rule, they are rather interesting.

Under the condition you can’t visit one, spend this day discovering something new about this celestial body. Up to the present moment there have been a lot of articles, films and documentaries devoted to it, so you won’t have problems with choosing. The choices are really endless.

The question “What is the date of Pluto Demoted Day?” involves a lot of amazing pieces of information. Today we want to represent our followers something really interesting.

Is Pluto a real planet? The question like has worried many people for a long time. The main part of public still continues to consider it to be a planet even now. However, unfortunately, it is not true. In order to be in the list of the planets, a celestial body must fall under a certain classification. But what about Pluto?

Today we are going to demonstrate you some typical characteristics and let’s see whether this object corresponds them.

Here we would to mention that the solar system contains many different objects. Some of them are of similar sizes and masses. They also move in approximately the same orbit. The scientists think that until Pluto collides with them and takes their mass, it will remain a dwarf planet.