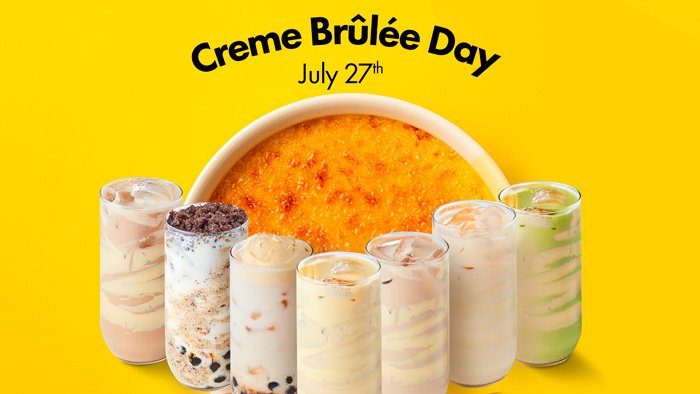 When is National Creme Brulee Day in 2022? Have you ever heard about the existence of this special occasion in the list of the popular holidays of the contemporary calendar? As a rule, in most cases people answer negatively, even under the condition they are fond of this tasty dessert. We find this situation to be an unfair one, so today we are going to represent you this event in details.

Talking about the matter what day Creme Brulee Day in2022 is, we can’t but mention the historical background of the event. As a rule, this theme direction is in the list of the most required ones among our followers.

The British, Spanish and French still argue about who the author of the crème brulee is. The Spaniards had a Catalan cream (no caramel crust), the British had their own English cream. But in any case, creme brulee in the form in which it exists now was invented by the French, Francois Messialo.

According to the popular version, while traveling through the Perineas, Messialo wrote down interesting recipes from the regions, including the recipe for Catalan cream. As head of the kitchen of the Duke Philippe of Orleans, the future regent of France, Messialo decided to prepare this cream for the duke, a famous gourmet. But Philip didn’t like that the dessert was served cold. Then Messialo decided to warm up the delicacy by placing a preheated frying pan on the cream sprinkled with sugar. As a result, the sugar caramelized, and the cream remained cold. But the duke liked this contrast of warm and cold so much that he ordered the dessert again, and again … And that’s how it was born.

Following another legend, the basis was not Catalan cream, but English, because the creator lived for a long time in London, where he almost certainly tried this cream. One way or another, it is believed that it was François Messialo who synthesized several recipes into one and came up with creme brulee.

What does Creme Brulee Day mean? Frankly speaking, we can’t even predict whether this special occasion means something special for you or not. Tastes differ. And among the representatives of the modern societies there are a lot of those who do not like this dish. The reasons can be quite different: some men and women do not like sweet desserts and there are a lot of those who are on a diet.

So, it is up to you to decide whether to celebrate this holiday or to forget completely about its existence.

All in all, the classic creme brulee dessert is a custard cream similar in consistency to pudding and covered with a crispy caramel crust. The name creme brulee translates as “burnt cream”, because following the classic recipe, after the completion of the preparation of the cream, sugar is set on fire on its surface, thus caramelizing the top baked layer.

There is hardly a sweet tooth who does not like crème brulee. This delicate creamy pudding with the finest caramel crust drives thousands of people crazy.

Talking about the question “When is International Creme Brulee Day 2022?” we can’t but mention some peculiar features of this special occasion.

As it has been already mentioned above this dessert was invented a long time ago. It happened in the 17th century. And up to the present moment it is considered to be one of the most favorite European desserts. Nowadays every respectful French cafe will definitely offer you this delicate creamy pudding, characterized with the typical caramel crust.

We have already told you that the classic thing is represented with a custard cream similar in consistency to pudding. At the top it is covered with a tasty crispy crust of caramel. The name creme brulee translates as “burnt cream”, because in the traditional recipe, after the completion of the cream preparation, sugar is set on fire on its surface, thus caramelizing the top baked layer.

In France, there are many variations in the preparation of this dessert. Cocoa, chocolate, cinnamon, liqueur, rum and other aromatic ingredients are added to it. Only the crisp golden crust remains unchanged, by which you can recognize the traditional French dessert crème brulee in any cafe in the world.

When is Creme Brulee Day in 2022, calendar will surely remind you. The special occasion has a fixed date of its celebration. It means that you can join on July 27th any year you would like to do it. As you perhaps understand, there is no need to expect that the local authorities will organize something special devoted this holiday.

However, you are always free to create a holiday for yourself as well as for your close surroundings. What about preparing this dessert at home? Can you do it? We will teach you then.

Prepare all the ingredients as it was mentioned in the recipe. Place the egg yolks in a mixer bowl and begin to beat with a whisk. Add some sugar there.

Beat the mixture until white, add vanilla, cold milk and whipped cream at the end of whipping. Beat the mixture again until an airy consistency with a mixer and pour into baking tins so that the form is filled to the top, the height of the form is 2-3 cm.

Put the semi-finished dish and bake in a convection oven well heated to a temperature of 100 ° C for 1 hour. If the future dessert is a little damp after the time has passed, continue baking for another 15 minutes or more (if necessary).

After baking, remove the thing from the oven, allow to cool, sprinkle the center with brown sugar and place in a cold place so that the dessert hardens well. This will usually take several hours.

Once the dessert has solidified well, caramelize the brown sugar onto the surface with a kitchen burner. After the sugar has caramelized on the surface, the dish should be served immediately so that the top of the dessert is hot and crunchy and the base is cold and creamy.

Talking about the question “What is the date of Creme Brulee Day in 2022?” we would like to mention the peculiar features of this special occasion as well as the dessert itself.

For more than 400 years of its existence, this tasty dish has undergone a number of changes. Firstly, today sugar is fired on a gas burner or by turning on the top grill in the oven for a few minutes. In addition, in the past 30 years, as mentioned, countless variations have been added to the original vanilla flavor.

French chef Paul Bocuse enriched the classic dessert in the 1980s by replacing milk with cream of 30% fat, which he heated with a vanilla pod. And behind him, various masters in Paris and around the world began to invent their own version of the cream. Well, in Paris, avant-garde artists have recently invented unsweetened dessert: the chef of the MVS restaurant, Gilles Choucrun, offers versions with foie gras and peanut sauce.

In its present form, this dish in the capital of France is worth trying in the restaurant “Au Petit Marguery”, which specializes in classic bourgeois cuisine. Dinner price there is reasonable – about 35 euros.

Excellent creme brulee can also be found at Les Cocottes de Christian, a concept restaurant by chef Christian Constant, where all dishes, including dessert, are served in Staub enamelled ironware. A final recommendation: crème brlée and foie gras are an appetizer at Le Petula Bistro in the heart of the Latin Quarter, serving classic French cuisine. The total cost of the dinner is 30 euros.