When is Limerick Day in 2022? We’ll tell you straightaway: this holiday, named after the Irish city (but having nothing to do with it) and glorifying the wacky verse form is celebrated annually on the birthday of an English author (not its inventor, though). Are you feeling a tad bewildered? Then welcome to the unconventional world of nonsense literature!

Nobody knows since when Limerick Day became part of the globe’s celebratory calendar. However, it’s widely known that the day it falls on is not a randomly chosen one. This date is marked by the birth of a prominent artist, poet, and musician from North London – Edward Lear (1812-1888).

Being a 21st child in his family, he got the talents in full. In spite of the lack of education (he was brought up by his older sister and didn’t attend formal education establishments), Lear demonstrated his natural gifts from the early childhood. First, he was engrossed in the art, principally drawing birds from life and later landscapes of the places he’d traveled to. Besides, the Englishman was noted among the musicians for his compositions. He set to music the poems of the famous Victorian author – Alfred Tennyson – and got his downright approval.

Thus, the creative power of Lear was long ago unleashed and required another field of being directed to. Therefore, he tried the poetry out in practice and ended up publishing a quirky book named “A Book of Nonsense”. The opus was a huge success with the readership and still is. Of course, it wasn’t just a usual work: this one was crammed with lots of humorous and ridiculous limericks! The poet even had to the next book called “Nonsense Songs, Stories, Botany and Alphabets” to satisfy the public thirsty for the new limericks.

You know where we’re heading to, right? Although Edward Lear is not the originator of this genre, it was he who brought the whimsical verses – well-loved since then – back to the people. So, giving the answer on when is National Limerick Day 2022, it is always set for May 12.

Before we initiate you into the mystery of how to appropriately spend the day, let us clarify what the limerick is. Named for the third largest city in Ireland, the limerick is a poetic form of the nonsense literature genre or a humorous poetry’s category. There’s an opinion that it appeared around 500 years ago but was revived in the 19th century thanks to Edward Lear.

Where’s that name come from? Well, it’s a good question. The most scholars agreed on the association of Limerick city with an abundance of various taverns, pubs and the like. Originally, the limericks were of the obscene and often indecent content, that’s why they were quick to become the favorite jokes of the grass roots at the table accompanied with a glass of beer.

As for the structure, it may be difficult to perceive the following description with the eyes. However, no matter what day Limerick Day in 2022 falls on, you can always scan these hilarious poems! But better read thoroughly.

You can easily distinguish these short mocking poems from any other rhymed combinations due to their strictly specified scheme of writing. Limericks are five-lines long and feature anapestic beat with AABBA rhyming structure. If you’re not a literature-minded expert, we’ll translate it to the simple English: the verse has the first, second and last lines rhymed with each other while the third and fourth ones differ in their own rhyme and shorter length. Moreover, the first and the fifth lines’ usually end with the same word. Anapestic meter stands for the pattern – like pa-pa-PAM – with the long syllable preceded by two short sounds.

Content-wise, Lear made the limericks more childish and innocent yet the serious notes might still be caught as well. As a rule, the first line describes the character (which name sometimes is not mentioned) and the place; the second introduces their peculiarity or explains what happened to them, and the further lines narrate the consequences of their actions. Mind-bending as it is, the verses sound delightfully simpler.

What does Limerick Day mean? For the inhabitants of Limerick city, it’s more like the day of their home, although they don’t forget about the roots of its recognition. For the poets’ community, it’s acknowledged to be the date when the writers take off their hat out of respect for Lear’s works. For an average man, it’s another reason to celebrate this year in an amusing way.

Perhaps, if you ask – what is the date of Limerick Day 2022, you’ll get most of the right answers from the English people since they share their motherland with the limericks. But it’s never too late to inspire the mankind with these five funny rhyming lines.

Actually, the genre of nonsensical literature is quite popular all over the world due to the wide spreading of this absurd poem type. Making up a limerick is a good way to stretch the imagination and, believe us, there’s so much of those who dabble in verses’ writing. So can you! 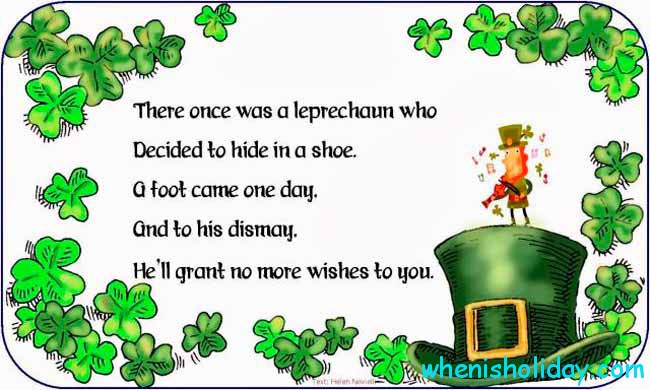 Starting with the most exotic way to honor the limericks and Edward Lear’s memory, you can make a trip to the captivating lands of Ireland on May 12! That’s a prime opportunity to enjoy the tipsy spirit of Limerick’s taverns, exchange a few verses with the locals (they have to know some, don’t they?) and learn the true meaning of the first silly poems. Although it might be time-consuming and, probably, costly project, it is definitely worth it.

The more common idea would be to organize the limericks’ evening. Invite your friends, relatives – whoever you want – prepare some refreshments and amaze them, or rather infect them with the uncontrollable laugh, through the heartfelt reading of the strophes. After a while, turn it the other way around, now it’s your time to roar with laughter!

Anyway, you can come up with the most constructive plan as well. Just take a pen, a notebook and cross over into the world of creativity and kingdom of amusing word combinations. You have the scheme and you’re equipped with all the necessary things for writing (alas, not an authentic pen). So rhyme on!

There’s only one little thing left: set a reminder in the calendar, when is National Limerick Day in 2022. Then count down the days till the holiday and get geared up for the humorous Monday!