WhenIsHoliday.com
Home Europe 🎇 When is Hogmanay 2022 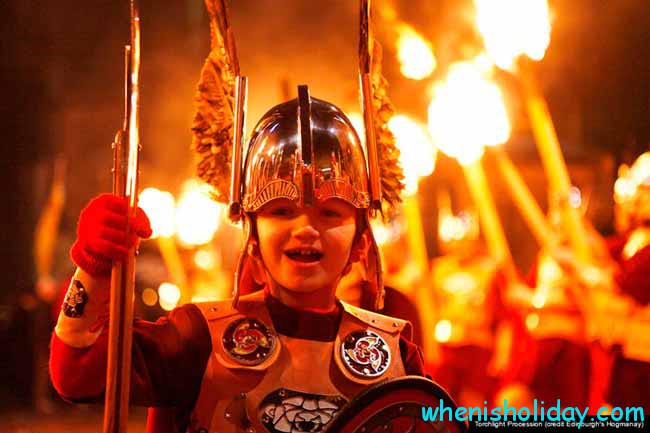 We get accustomed to celebrating the New Year sitting at home with our family and friends near the Christmas tree, enjoying delicious meals and giving presents. However, in Scotland the usual understanding of this holiday has a much greater scope, being celebrated as the biggest festival of the year. It even has its own name – Hogmanay. If you are thinking about an unusual celebration of the New Year, you are sure to get interested when is Hogmanay in 2022 and what should be stocked up to spend this day.

The origins of Hogmanay are quite vague, but still, it is considered to originate between 8th and 9th centuries. The roots of this holiday refer to the ancient times when it was worshiped by pagans and celebrated by the Vikings at the end of the year, on the winter solstice. The origin of the word “Hogmanay” itself is unclear as well: some sources claim that it is based on Gaelic “one maidne” standing for “new morning”, and somebody states that this word is of the Anglo-Saxon origin and was primarily spelt as a “Haleg Moneth” – “holy month”.

Hogmanay is a special celebration, dedicated to fire. Why fire? According to the beliefs of the ancient people, the flame represents life, and only it is able to withstand severe frosts, with the coming of which the world immerses into the sleep for several months. Moreover, flame also stands for wisdom and the Scots give credit to the theurgy of the New Year fire that helps eradicate the bad intentions and give a bright hope for the following year. That’s why many Scottish customs are connected with the fire and their New Year includes all kinds of fiery performances.

Hogmanay is celebrated throughout Scotland and it goes without saying that the most important events are held in the largest cities, primarily Edinburgh and Glasgow. The peculiarity of this Scottish feast is that it lasts more than 1 day. So, to know exactly when is Hogmanay in 2022, tick off 4 days in the calendar, beginning from the 29th of December 2022 and ending up with the 1st of January 2018. 4 days of unbridled entertainment!

Many activities are connected with fire. By lighting a fire in the evening of the 31st of December 31, the Scots attract good luck, joy, and warmth. Flame is known for its magic of clearing body and soul, therefore Hogmanay is full of bonfires, fire processions, illuminations, and fireworks.

The holiday is also marked with different kinds of amusement. Especially a great attention is paid to the national dance, the so-called ceili – it doesn’t require any training, but the full emotional recoil of the dancer. So, do you want to have some fun and dance in the open air with thousands of people? Pack your stuff and set out for Scotland, when there is Hogmanay 2022.

In addition to this, at midnight people are supposed to sing the Scottish New Year’s song calling «Auld Lang Syne», whose tune is known all over the world – and kiss everyone after singing. A good alternative for those who want to fall in love.

In 2022 the holiday promises plenty of entertainment for all tastes beginning from the fans of brutal Vikings up to the connoisseurs of classical music.

Everyone can take part in the solemn procession with torches, which will be held at the main street of Edinburgh – Princes Street. Every year, a procession involves more than 50 thousand people. If you are not satisfied with the torch procession, you can spend New Year’s Eve in a more classic manner.

The St. Giles Cathedral will welcome people to visit a concert of classical music with a special festive atmosphere by candlelight. There will be performed the works of Bach, Vivaldi, Chopin and others.

If you aren’t planning to celebrate the New Year in any hotel, restaurant or pub, the streets of Edinburgh will offer you the things to enjoy the holiday. Many outdoor concerts, street stalls selling food with tempting aromas of cinnamon and mulled wine, big markets, and, of course, the large-scale fireworks shows.

After a stormy New Year celebrations, on the 1st of January, there will gather many street musicians to play the Scottish folk music on the territory of the Old Town of Edinburgh. 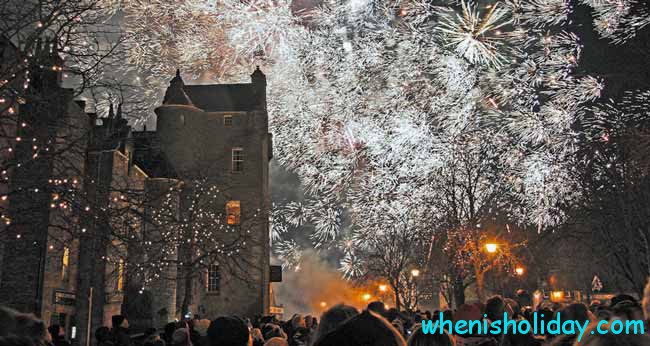 Speaking about a kin festivity, in the New Year’s Eve Scots light fires, and all family sits around the mantelpiece waiting for the ball drops. As soon as the hand of the clock approaches twelve, the owner of the house comes up to the door and quietly opens it. The door should remain open as long as the clock strikes. This ritual is held to drive out all the difficulties and hardships of the last year.

If you look at the calendar to find out what is the date of Hogmanay Day – 2022, you will probably be surprised, since this year the holiday will be celebrated at the weekends, so it is expected to cap the climax.

A superstition for good luck

Traditionally, there should be a lot of guests in the house. And it is very important what color of hair the first guest will have. If the first person who entered the house is a pretty brunette, — this will bring the owners wealth and well-being. Special prosperity is guaranteed if he would bring a bottle of good whiskey. It is also considered a good omen if the dark-haired man comes with a piece of coal, which he should throw in the fireplace and wish: «Let there be eternal light and joy in your home!» He can bring his own food, salt, and money – a sign of well-being in the coming year – or a sprig of an evergreen tree as a symbol of long life. But only having paid tribute to the hearth, the stranger can start talking and expect for an invitation to the table. But if the first guest is blond or redhead, it is most likely that the hosts will not be satisfied. Such a biased attitude is rooted from the invasions of the blond Vikings. This foretoken is called the first-footing and Scottish people worry about it, so they often hire good-looking brunettes, who drop in the houses at the New Year’s Eve, bringing luck to their inhabitants.

To crown it all, Hogmanay is the most significant holiday among the Scots. Annually they are looking forward to this feast and put their soul into its celebration to make it overwhelming and breathtaking for native people and tourists as well. Needless to say, what a great day Hogmanay is going to be in 2022 since it’s better to see it once than to hear one hundred times about it.

🥃🍕 When is International Beer and Pizza Day 2022