In case you want a drink, there is at least one legal excuse for that. Well, if you are an American. When is National Repeal Day in 2022? Read on and find out!

It’s all about the Prohibition, actually. The latter started its sadly known history in the beginning of the 20’s. The voices of the society claimed that America needed morality and protection of the national values. They were sure that one and only condition for that was the total ban on the production and sale of the alcohol.

What were the real reasons? First, the Great War made the US reach the peak of its wheat export. Selling the product was much more profitable than processing it. Then, the plants and factories were in need of the qualified and – more important – sober manpower, as well as the car industry wanted the conscious drivers.

The Prohibition was adopted in the middle of the 10’s across twelve states. Besides, The government forbade to transport the sweet stuff from the “drinking” lands to the “dry” territories. By 1917, three quarters of the and states were under the restriction.

During the first three years, the improvements were quick on the way. The stats confidently showed the decrease in the number of the crimes triggered by the alcoholism. The citizens got more inclined to drinking milk instead of beer and more into saving up money instead of wasting them on spirits. Seemed like the measure had worked.

Yet we all know that the laws are for breaking them, don’t we? If the alcohol wasn’t to be produced and sold freely, then it’s to be manufactured secretly. In a while, the gangster groups sprang up all across the country. They provided the US with the outlawed stuff, controlled its selling and organized the secret communities. These chaps harnessed every possible types of transport to bring the deficient item in. They created the underground trading routes, flotillas, and the air fleet! The police just couldn’t cover all of eighteen thousand kilometers of the American borders. The contrabandists had their own radiostations and people in the departments.

Right in those times, the alcoholism among the women emerged. If they were into the light drinks before such as the wine and liquor, back then they obtained a soft spot for whiskey, bourbon, and moonshine. According to the sources, the government spent three hundred million dollars on the struggle with the alcohol. Comparing to the military expenses which took up four hundred million dollars, the success of the first wasn’t that obvious. In the cities, the mafia clans were formed that kept in constant control the underground market. Of course, the profit wasn’t to get into the public purse.

However, while the Republicans were still in dominance in the White House, the chances of annulling the Prohibition were less than ever as this would have meant their loss to the Democrats.

When is International Repeal Day 2022? Mr. Roosevelt abolished the inglorious law in 1933. Looking back at that period, it’s evident that too many people were against being limited in the amount of the drinks they’d had. The corruption made its contribution, too. The longing for the spirits could get it even in the legal way as the law left dozens of the loopholes. For instance, if a man showed the permission from the doctor, he could buy the whiskey in the drug store for it was known as the medicine. Moreover, if someone saved up on the alcohol before the Prohibition came, they could do whatever they wanted with it. The other produced the liquid at home, turning the soft stuff into the strong one.

So, by the end of the 20’s, the Prohibition was in agony: the spirit was in abundance, together with the crimes and corruption, the government was totally bewildered while the grassroots got really annoyed. The experiment wasn’t an achievement to be proud of anymore. The Repeal became the first – and so far the only – phenomenon in the law system of the United States.

What does Repeal Day mean? It means indulging in a couple of cocktails, glasses of beer or shots of vodka without the least surges of consciousness!

You’ve probably heard the saying which goes like “the truth is in wine” that lost its sense long ago because of the damage the spirits bring along. Nevertheless, the wise men couldn’t claim it without a grain of sense. So, what’s the point?

The alcohol does have a few positive features. It contains a bit of the ethanol extracted from the sugary substances. Getting into the human’s organism, the spirit spreads on the organs with the blood flow. The bigger share goes on the nervous system. Thus people feel the pleasant dizziness. They are sure that they are funny, wit, and can cross the oceans.

Consuming the strong drinks in moderate amounts, the risk of cardio vascular system diseases is reduced. How’s that? It was discovered that the alcohol flowing in together with the vegetables and fruits helps prevent lots of cardio pathologies. Yet the food must be eaten in much bigger amounts than the dizzying beverages. By the way, that is the well-known French diet and citizens of this country are less than anyone prone to coronary disease. All this thanks to the litres of the red wine they guzzle down together with the veggie and fruity appetizers. The product also contributes to the elasticity of the blood vessels that prevents atherosclerosis. It’s really important to know what day Repeal Day in 2022 falls on, isn’t it?

We’d better not be aware of the things the man could do if he’s kept away from the item he longed for!

During the Prohibition, the special category of the underground sellers was formed, called the bootleggers. The name comes from the feature of bearing the little flask right inside the boot. Although it wasn’t the invention of the “dry” times, it was perfectly appropriate. What the insane tricks they came up with to pull the deal off and earn the fortune on the affection of the citizens to the spirits.

The bootleggers wore the shoes with the soles shaped like the cow’s hooves. If you don’t see the logic in here, we’ll explain. The police were deep into searching for the secret routes of the contrabandists, going through the forests. Of course, they expected to come across the human’s trace, not that of an animal. 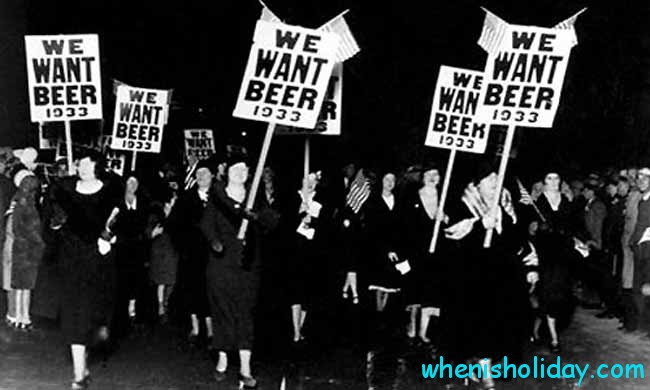 On top of that, they also used all of the things fit for transporting the deficiency, from the Bible books to the cans with pickles and pig’s carcass stuffed with the whiskey bottles! Long before the cartels’ times, the bootleggers used the torpedoes loaded with the contraband. They shot them from the Canadian coast in the side of the American Great Lakes. In fact, Canada became the so-called place of alcohol heaven as the laws there were much more moderate. Detroyt – a town that happened to be located right next to the border with the drinking neighbor – was a key point of the illegal transportation.

The “exporters” tied the loads to the bottom of the boats crossing the rivers. Even the sunken vessels were used. When we think of the bootleggers, we often picture the portrays of Al Capone and other ruthless gangstas in our minds. Yet this field favored the women as well! You might not even have guessed but the best “deliverymen” of the alcohol were females. That status was due to the ban on the search of the women. Thus the latter could carry the binges under the bulky coats.

How can you celebrate the holiday? With a booze in your hand, of course!

First, you can drop by your favorite bar and have that drink you’ve always wanted to place your fingers on. Be it the Bloody Mary, B52 or just a good old vodka, everything is allowed.

Or, just throw out the real party with the litres of alcohol flowing down the bellies of the invitees!

Mark in your calendar, when is Repeal Day in 2022, and always appreciate even the most mundane things in your life!