Such is the custom that the onion always makes us cry whenever we cut this mean veggie in its raw state. As if that wasn’t nasty enough, it has quite distinctive taste and flavor that not everyone may stand. But everyone – we’re sure – goes crazy about the super popular dish made of onion.

Your guess? The onion rings! The golden crust is full of strong flavorful notes while the softest inside brims with delectably sweet oxide decomposed in disulfide (that’s an onion’s chemistry, no more). It definitely deserves a special date in the calendar to be perpetuated through the centuries. So when is National Onion Rings Day in 2022? Read on and try not to salivate over the narration!

Unfortunately, it’s still a mystery hovering over the issue of when and where this fried deliciousness was invented. Nevertheless, there are several plain facts on which we can determine the milestones in the onion rings’ biography.

First, a reference to cooking a somewhat similar to the good old spicy slices was found in a cookbook published in the beginning of the 19th century. Sounds impressive, isn’t it? Taking this recipe into account, it turns out that the onion rings are about 215 years old. Anyway, the author offers to take the circle-shaped pieces of vegetable, plunge them into the mix of flour and spices, sprinkle with cheese (preferably, Parmesan) and cook in hot pig fat. The familiar steps of the process are evident.

Then, there was an advertisement of a shortening in American Sunday newspaper in 1933 that suggested discovering its excellent qualities by doing the following: soak the onion rings in milk, coat them with flour and fry in the skillet full of fat.

The 20’s witnessed the amazingly quick spread of the drive-in restaurants of the once popular American chain called Kirby’s Pig Stand and based in Texas. Today, it’s no longer functioning but went down in history as one of the contenders for the gold medal in onion rings’ invention.

You probably know that this snack is primarily sold in the fast-food eateries (though the upper-class buildings don’t scruple serving them, too). The credit of making the onion rings’ a fast-food heritage belongs to a chain founded 94 years ago. Its owners introduced the dish to the menu in the second half of the 20th century and, frankly, they did the right thing!

That’s how this tasty crispy dish was brought to our tables and taste buds. Come on, tell us, who doesn’t like the onion rings? They just haven’t yet had a chance to cook and eat them properly! So write it down when is Onion Rings Day 2022 and surprise those unhappy people with a portion of delicacy. We’ll give you the best recipe just in a few lines.

What does Onion Rings Day mean? It is a short day in the year to stop for a moment and appreciate all the value of having the onion rings in our lives.

You can cook this simple and unpretentious dish for 20 minutes, and, besides, with little costs, you’ll have the whole company of friends stuffed to bursting point. Moreover, these tasty rings can be prepared even by the amateur in the cooking affairs. Deep fried circles of onion are acknowledged to be the best snack for a glass of beer, both light and dark. And it’s really a cheap option of quick appetizer because a couple of onions, a tad of oil, pinch of salt, eggs, and flour may be found in every kitchen under the sun. If you’ve just come back home after the long holiday and the fridge looks at you sadly, then the visit to the nearest shop will cost a laughable sum.

On the whole, could you imagine a huge juicy burger, or a hot dog, without their ideal mates represented by the well-known french fries and onion rings? Impossible! They are so interwoven in the worldwide food culture, especially in the “department” of fast food, that the life without them will certainly be dull. Answering the question what is the date of Onion Rings Day 2022, it’ll take place on June 22.

The onion rings are the widely liked appetizer. Even at the dawn of its invention, it always came with the main dish such as the fish, meat or vegetables. It’s a versatile food that spruces up the celebratory dinner and perfectly fits the atmosphere of the Friday evening at the pub. There are dozens of recipes revealing the best way of cooking the snack but the main principle is invariable. The onion is cut into rings, dipped in the batter and fried in sizzling oil.

We’d like to talk about the onion’s health benefits – it’s a killer of various bacteria after all – but alas, the rings are not the most wholesome thing to consume. The frying destroys the vitamins, minerals, and nutrients. Nonetheless, we will end up in the same place some day so why stint ourselves in eating delectable foods?

Proud Europe, upside-down Australia, comfortable Canada, greenly lush New Zealand and dangerous South Africa, all of these countries worship the golden onion rings. Oh, we forgot the free America… but you’ve already learned that they are the staple of the US lifestyle. 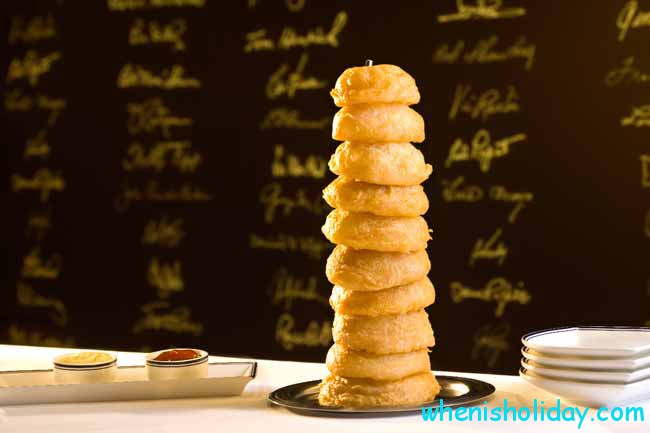 You understand that there is no other way to celebrate Onion Rings Day except for tucking into as many onion rings as possible (literally, gorge yourself in advance)? Here is the long-awaited recipe for the most tasteful snack ever. You can try it no matter what day Onion Rings Day in 2022 falls on.

Peel an onion – don’t cry too much – and slice it into neatly shaped circles. Sprinkle them with salt and pepper and set aside to make the batter. Separate egg white from the yolk and beat the former with spices until the foam appears. Combine the yolk with the sour cream and whisk it properly. Pour this mix into the frothed whites and add the flour to get rather thick consistency. Heat up the oil (about 5 cm thick) in the skillet, bread the rings in coating and place them on the pan. Fry for 3 minutes until they cover with a golden crust and try not to let them touch each other. When cooked, put them on the paper towel to flow down the oil and then serve with dipping sauces such as ketchup, mayo, garlic sauce and the like.

Okay, if you’re a health-conscious person, and are afraid to even think of the sizzling fat, bake the onion rings’ in the oven. It works that way, too.

Take a tour of the eateries that offer the snack, bur before look up on the Internet all the deals and freebies in honor of the holiday. By the way, the rumor has it that the cookers put their whole soul into preparing the dish on this day. So you’re likely to be impressed with the onion rings threaded onto the straw and dipped into the cocktail, onion rings made in the shape of the heart and onion rings wrapped in bacon. And believe us, the cookers’ fantasy might be infinite.

All in all, circle in the calendar, when is Onion Rings Day in 2022, and have a good stack of this delicacy at least three times in a day for a meal. That’s the guarantee of the true appreciation of the dish on June 22! 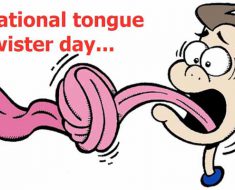 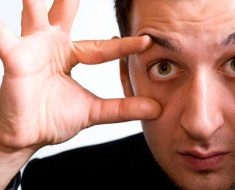