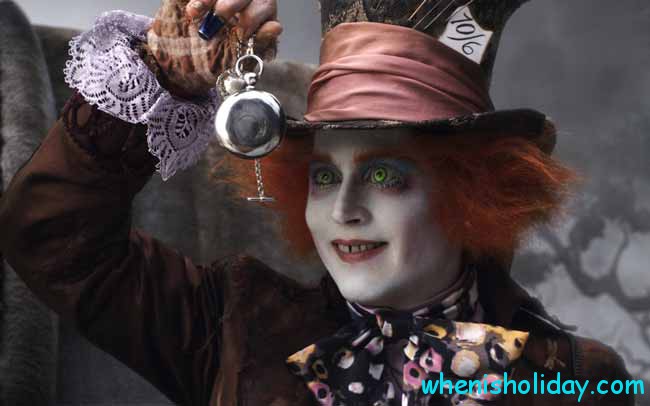 Scarcely there is somebody in our time, who have never heard about the Mad Hatter from «Alice in Wonderland» of prominent writer Lewis Carroll. Though how many of knowing people are aware of when is National Mad Hatter Day in 2022? If you have a desire and inspiration, every day can be like a holiday, the main thing is to find an excuse. Why don’t create another day of silliness, whose admirers can be found in every corner of the world, where they have heard about the charismatic hero of our childhood? Moreover, this 2022 year, the insane holiday falls on Friday, and you have no need to think how to spend it because you can take creative ideas for you and your friends from this article.

Before founding out when is International Mad Hatter Day 2022, it is worthwhile to understand where this holiday came from. It is interesting that it was created not by some hatter’s fan or book lovers, but by… a group of programmers! It is well-known that the drawing of John Tenniel to the book inspired boys in 1986. 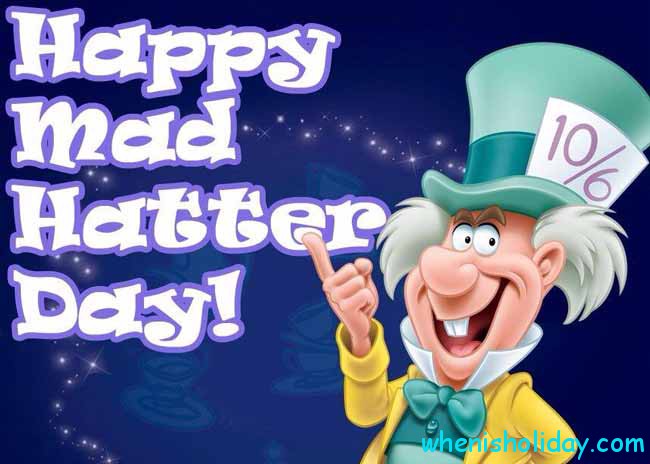 They were guided by the same drawing when it came to the choice of the date of the holiday – October 6, as these numbers were written on a piece of paper on the hat of the mad hero. Although if you belong to those who live the system day/month, then your time to fool around and show off with paper or cloth hats falls on June 10. Let the inscription 10/6 refer to the cost of the headgear (10 shillings and 6 pence), but the guys from Land of Liberty showed a wit and used these figures for a date. That day became so immersed in souls of Americans that two years later, in 1988, it became an official holiday, a mention of which appeared on the cover of a national newspaper. Apparently, people of those times have long expected a holiday of this kind, where they can be as silly as they really are.

Are you as mad as a hatter? But where did this expression come from? That’s all about lead, which hat companies used it in the hat making process at the beginning of the 19th century. Of course, this could not but affect the producers’ health and they became insane because of the lead which had a negative effect on mental health. Since that time, this colloquial expression about some crazy person has appeared which in the future borrowed Carroll for his wonderful story about Wonderland.

What does Mad Hatter Day mean for people? This is an excellent opportunity to re-read this old but unforgettable book with your family, to see the best or the newest of the films based on this book (judging by its ratings, Tim Burton struck everyone with his masterpieces in 2010 and 2016). In addition, you can visit some festivals in your city, which are dedicated to all the madmen in antique hats and with funny makeup.

So, to wear or not to wear? There are sprouts of creativity in each of us, and let such events be the occasion for the manifestation in creating your unique look for a tea party with friends or create one and only hat, which is recommended to be worn throughout the Mad Hatter Day. Of course, you can stop bothering yourself and look for your hat at the nearby hat shop. However, this is an option for lazy. Although encouraged to add such attractive details as beads, ribbons, and brooches on ready-made clothing.

People from time to time want to lose their minds and not to pay their attention to what people think. Mad Hatter Day is the official permission for such actions. The most important thing is not to overdo with this and remember that dyeing your hair blue like a color of your hat for this day can be unacceptable in your office next day.

Most of all, this holiday is appreciated by children for its colors and gaiety, but don’t worry if you’re mad, just have some fun, insane hat-maker would appreciate it.

From the very beginning, these guys-programmers conceived this holiday as the second day of silliness (official one is the holiday on April 1st), but still changed it for the M.H.D, because it was considered as more merry-making variant. It’s impossible to say exactly what Mad Hatter Day in 2022 is, because there is no certain guide to action for this occasion, just be in your hat and do different fun things no matter how stupid and childish they could be.

Maybe you want to dress up your cat in a crazy outfit (although it is unlikely going to be so easy) or to bake a huge cake in form of hat, thereby creating the main dish at a tea party for all comers? It is only necessary to start thinking out and ideas will appear by themselves. Even those tricks with dates 10/6 or 6/10 do not at all contradict the spirit of the holiday, rather the opposite. Without fail, you can celebrate it twice a year.

The idea of the holiday is great; it can be performed in any way we wish. Write it in your notes and when is Mad Hatter Day in 2022, the calendar will remind you that it is time to look for your special hat and take a tea service out. Why tea service? Again, thanks to Lewis Carrol. According to the story, Alice got acquainted with the mad hat-maker during tea drinking, which was a constant, continual and incessant process for him and his friends. This was one of his manifestations of insanity. Those present at the table were constantly changing places. No matter why, but it is a laughable idea for playing a game during your holiday, try to develop and adjust it for everyone who is ready for fun.

Traditions are made to adhere and recreate them. The photos from a tea party will gain a lot of likes and views in social networks. Therefore, there is an organic plexus of good traditions and fashionable innovations.

There are some facts, which can drive you crazy!

So the question for you is «Are you able to wear a hat the whole day? ». If your right answer is «yes» – Congratulations! Put it on and recall what is the date of Mad Hatter Day 2022 – then just celebrate it!

When is Put A Pillow On Your Fridge Day 2022