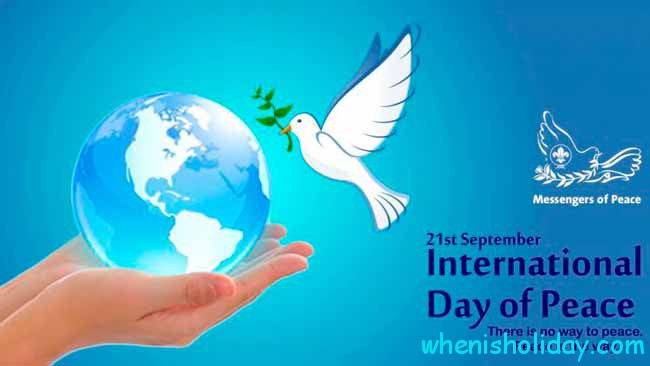 The majority of people take peace for granted, like an element of everyday reality: everything goes on as usual, and everyone is busy with his own concerns. In such places, where the foundations of a society are strong, people often take no notice of the priceless gift of peace. Howsoever, in some regions, this gift is nothing more than a myth. People live there in chains, in an atmosphere of insecurity and terror. So, for these people, the World Peace Day is like a ray of light in the darkness of cruel war.

What is so special about this occasion, and when is the World Peace Day 2022?

The World Peace Day is recognized as the day of global ceasefire. This day all the nations must observe the rule of cessation of military operations. Nowadays it is held on the 21st of September. But its history tells that this holiday was founded by the Pope Paul VI on the 8th of December, precisely to say on the Catholics Holiday of World Prayer for Peace.

Later on, this high day was announced by the decision of the UN on the 30th of November, 1981. The main principles which were taken on the basis of World Peace Day are the protection of peace ideas, consolidation of friendly relations between countries and providing peace in the world by joint efforts.

If you wonder what is the date of the World Peace Day 2022, it’s worth to notice that initially it was celebrated on the 3rd Tuesday of September. Then, on the 7th of September, 2001, this holiday was shifted to the 21st of September.

Symbols of the holiday

The World Peace Day has got some symbols, which bear the great significance and are recognized by the whole world. Thus, the image of white pigeon with an olive branch is used as an emblem of this day. Its creator is Pablo Picasso. Firstly, the symbol was introduced at the World Peace Congress in Paris in 1949.

Another symbol is the Japanese Peace Bell. Its history reaches the middle of 20th century, when Japan presented the Peace Bell to UN in June 1954. It’s striking that the bell was molded of coins collected by kids from 60 countries.

Furthermore, the central headquarters of the UN in New York possesses a similar bell. There is a tradition to ring it twice a year: at the beginning of spring, on the vernal equinox, and on 21st of September. This bell has a special inscription, that proclaims the idea of universal peace.

The aim and traditions

Traditionally, every year on this day, people all over the world gather together to re-think the ways of preserving peace on our planet and to discuss issues relating to the termination of wars. They also remember the victims of the devastating wars that have raged over the past century.

In New York, the Secretary-General of the United Nations delivers the speech, which appeals to the governments of various countries, encouraging them to listen to their people and take care of making life in their countries safer. He also takes into consideration the issue of equal rights of all people.

After his address to the public, he rings the Bell of Peace, its ringing reminds people how it’s important to make our planet be reigned by peace, friendship, solidarity, and understanding. This ceremony also includes a minute of silence, which is intended to honor those who sacrificed their lives for peace.

What to expect from it and what day is the World Peace Day in 2022?

In order to draw attention to the global problems of mankind, special activities are held on the 21st of September. Moreover, the every celebration of this holiday has a definite purpose, thus each year it is dedicated to specific problems and connected with different themes. Particularly, in 2016, The World Peace Day was carried out under the motto: “The goals of sustainable development: the constituent elements of the world”. At the UN General Assembly in 2015, 17 main objectives were unanimously approved to be achieved for the world over the next 15 years. The main aims are the elimination of poverty and hunger, the problem of lack of resources, the fight against diseases and environmental pollution, social equity. 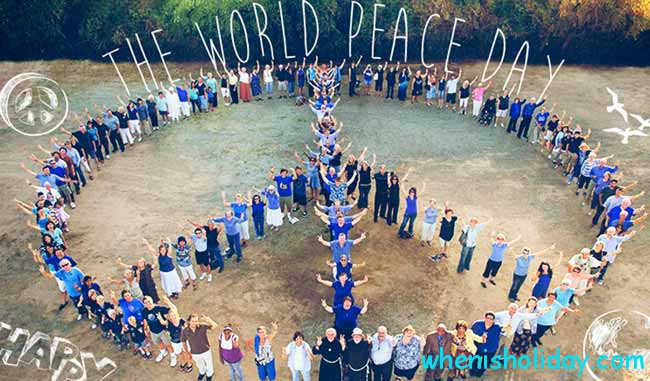 In addition to this, this holiday also means carrying out activities aimed at educating and raising public awareness about the problems associated with the cessation of military operations throughout the world. Interestingly enough, in 2008 with the purpose to ensure even greater awareness the United Nations organized a campaign concerning the Day of Peace in a number of countries, according to which everyone could send his message, the so-called “SMS for peace” directly on the 21st of September or on any of the preceding days. These messages were shown to the world leaders on 23rd of September in New York at the 63rd session of the UN General Assembly.

Also, this day is full of seminars, meetings, exhibitions, performances and concerts which are held in education establishments, aiming to convey all the negative consequences of wars and enmity, as well as to help support the idea of “Universal peace in the world.”

If you are interested when is the World Peace Day in 2022, then tick off the 3rd Thursday of September on the calendar. It will be the day when children all over the world will draw pictures on which the bright sun is smiling and will sing choral songs about friendship. Perhaps someone considers it to be the innocent games, but they carry great sense and appeal to those, who hasn’t given up the weapon yet.

Read more:  International day of mobilization against the threat of nuclear war

Peace is and always will be the greatest value of humanity. Such a holiday is actual as never before, many people are waiting for this event, they know exactly when is the World Peace Day in 2022 since this one day gives them hope and belief for something better. Modern society is suffering from ethnic conflicts, wars, terrorist attacks, environmental disasters. And the worst thing is that all this evil comes from one source – human. So, it’s vital to realize the importance of keeping the peace not only outwardly, but also within, in our hearts to provide safely future for succeeding generations.