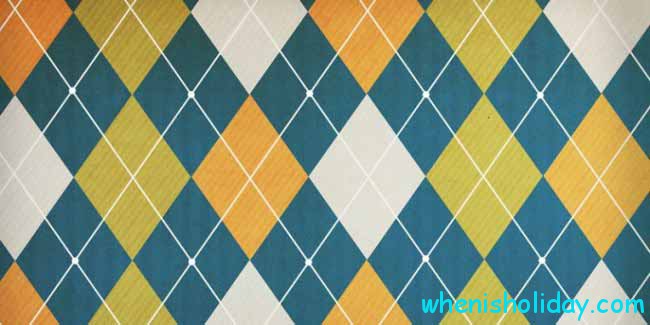 The geometric prints and patterns are long used by the fashion designers. Polka-dot, stripes, check and, of course, argyle are still popular. Today, we’re going to talk about the latter as the day in its honor is coming!

When is National Argyle Day in 2020? Let’s find it out together.

In a word, this one is a sign of the refinedtaste and a tad of the aristocracy. The part of it is explained through the history of the pattern.

It started long years ago and, as you may have already guessed, it was born in Scotland – the motherland of the plaid and everything that it relates to. However, there are two versions of the print’s origin.

The first one claims that the prototype for the print was hidden in the pattern of Scotland’s national flag. The second one tells that the ornament is a slightly modified pattern that adorned the traditional kilts and plaids that belonged to one of the local clans called Campbell. It lived on the territories named Argyll located on the west of the country.

The fabric used for making clothes appeared at the end of the 19th century when the weavers invented the new technique call the intarsia. Thepointwasinusingthethreadsof the different colors. As a result of their intertwinement and overlay, the pattern was born that looked as a whole yet, infact, it consisted of the hundreds of the pieces. Before that invention, the argyle was known only as the print for the socks. The latter was made by the ever-popular company called Pringle of Scotland, founded in the beginning of the 19th century.

In the 20’s, the company developed the most famous and much-loved two- and three-colored pattern. A bit later, it introduced the legendary sweater that became the symbol of the British style and classic. With the distinctive V-shaped collar, the argyle print seemed so fashionable that turned into the hit of its time.

The next boom of the popularity was reached in the beginning of the 21st century. The ornament was noticed by the prominent fashion designers, plus, the part of it was due to the German brand called Burlington. They presented the world a new print, with the unusually bright and contrast colors.

Nowadays, the print is believed to be a superstylishaccent in the clothing. So, the question – when is International Argyle Day 2020 – seems to be equally popular, too!

What does Argyle Day mean? It means putting on as many argyle-themed pieces of the clothes as possible!More frequently, the print is used in knitting. It is formed with the help of the special technique of knitting with the threads of the different colors.

The most classic way of using the pattern is its putting on the various hosiery, sweaters, and jackets. The socks with this print could be used not only in the men’s wardrobe but also in the women’s. They could be made in the same color as the whole look to make the image more classic, or in the bright color, being the contrasting accent of the whole look. The same works for the sweaters with the ornament’s pattern. For the course of the years, the designers created a lot of the outfits with this traditional ornament. Today, you can meet it on the outerwear and right down to the accessories. There is even a nail polishing with that print! Besides, the classic silhouettes with the ornament entered the children’s fashion as well.

Regardless of what day Argyle Day in 2020 falls on, it is allowed to wear it at any time of the year!

The print can also be the element of the interior’s decoration which brings a bit of the dynamic to the atmosphere. The rhombic structure of the picture entails the feeling of the multiple layers while the use of the different colors enhances the effect of the volume. It can be applied to the walls, floor, and furniture. The pattern could be combined with the various ornaments and the most classic one is the combinations of the argyle with the other kinds of the check. The careful matching of the accents would bring the amazing result and help create the great image. On top of that, it is good for creating both the light tender look and the brightly mischievous one. Your imagination is not limited at all!

The modern models use the print not only in the knitted wear but also in the leather one. Since the beginning of the 21st century, the ornament became really popular all across the world. The rhomb is considered to be a pure classic which is interpreted differently depending on the author. It could be the combination of the plain black and grey or something more catching. The records of the creativity are beaten by the Burlington that uses the print in almost every accessory and piece of clothing.

What is the argyle? It is a pattern that features the squares placed diagonally, more often – the rhombs – and the lines that cross and form the rhombs.

With a bit of the exception, in the collection of the fashion designers for the last few years, we see the two-colored ornament of the plain tints. It is also noticed to be a monochrome. Well, the most beautiful and spectacular collection was presented by well-known Mr. Lagerfeld in the autumn of 2013. Everything was so interesting – starting from the place of the show (the real mansion) and ending with the atmosphere and the choice of fabric. In his performance, he integrated the culture of Scotland and the events of the life of Coco Chanel. It is known for sure that she had an affair with the Duke of Westminster. As a result, the world saw the unusual and bright collection full of the aristocracy and the ethnic motifs. The argyle was a star of the jackets, skirts, and hosiery. The author used the plain colors – the dark wine red, the dark green, and black. The looks were supplemented with the images of the Victorian era – the berets, high boots. The fabrics that were used are the tweed and the wool. 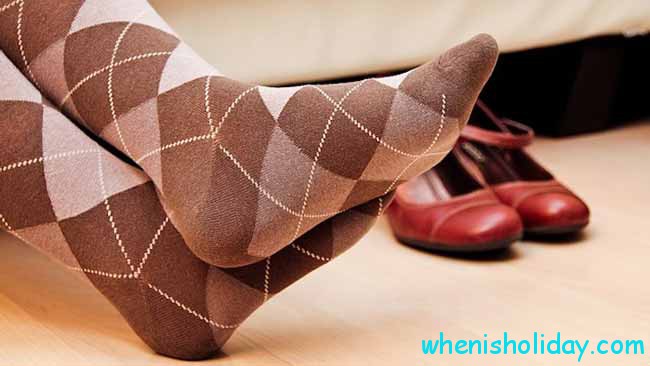 What is the date of Argyle Day 2020? It annually happens on January 8!

In the collections of another famous fashion designer – Mr. Hilfiger – the pattern is the close fellow of the check and the houndstooth. The basic colors were black, white, dark blue, and beige. The plain red color was used for distinguishing the details and accessories.

The Givenchy brand used the pattern in the men’s collection where they combined it with the leather, plaid, and sweaters that featured the pictures of the animals. No less popular were the hosiery, socks, and knee-length socks of the Burlington. Due to the unusual colors, they are good for accompanying any look even in the grayest days. For the middle season, the Burlington’s socks with the argyle are also the excellent choice. Mr. Lauren, in his turn, also created the hosiery with that pattern making them more British.

In a nutshell, the print is the combination of the classic traditions and the elegant refinement. Having settled down only in the men’s wardrobe at first, today, it is the print that won the hearts of the women as well!

There is no better way of celebrating the holiday as to put on everything that you have from the argyle family. The sweater, jacket, socks, gloves, t-shirts – all of these will be okay to wear on this great date.

Mark in the calendar, when is Argyle Day in 2020, and spend the day in the theme colors and patterns!