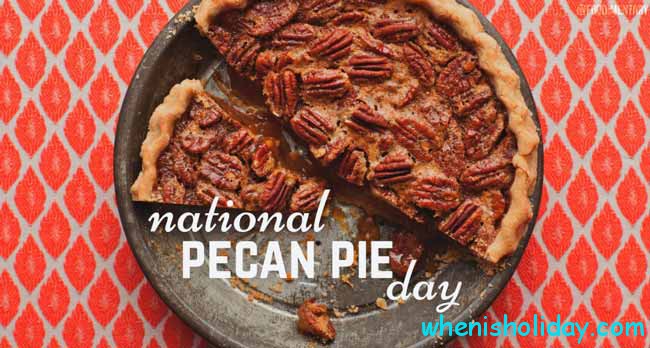 Do you know what the common feature of Christmas and Thanksgiving Day is? Yes, they both are holidays and are meant to be observed within the family circle, but we’re implying something of a foodstuff. And it’s not the turkey; it’s sweet and so nutty… A pecan pie, of course! That’s what your Grandma surely makes for at least two times a year.

However, here is a kind of a surprise for you: we can eat the pecan pie legally three times in the course of 365 days (no one forbid to consume more, though). You see, it’s those two holidays plus the date designated exactly for this dish. Interested? Then read and learn when is National Pecan Pie Day in 2022 and what’s the best way to spend it to the fullest extent!

It makes sense to suppose that the motherland of the pie is where the main ingredient came from. The pecan nut is the only nut growing on the lands of America proudly and freely since the ancient times. The Native Americans took it as one of the main food products as its edible parts are fit to eat even after the season is over and the trunks of the trees are perfect for storing the fruits inside.

In the 16th century, the European settlers got to know not only the weird inhabitants but also their habits, including the diet. The pecan was so exotic for the invaders, with its unusual form and taste, that they christened it as a wrinkled nut, translating from the Spanish. Thus the settlers spread the pecan to the Old World. By the way, the name of the nut is a slightly misspelled word “pakani” that was taken from the local language. It means the nut that needs to be crushed to get to the contents.

With time, the pecan became a cultural pride of the US. The third President of the country was known to grow the trees at his manor and even entertained the nuts to Washington who couldn’t resist bedding them out in his backyard. Today, the pecan is cultivated mainly in the south of the state as the climate and soil are more favorable there. Georgia is acknowledged to be a sort of the “pecan state” because it provides more than half of the year’s harvest.

Back to this delectable thing made of the pecan, there’s no evidence on the issue of when the recipe was invented. All that the history has is the documentary records that contradict each other. Some tell that it is a work of the French settlers which tasted the nut and came up with the cooking idea at once. The others suggest that the pecan pie originated in the second half of the 19th century as the first published recipe appeared in 1886 in women’s magazine.

However, the most prevalent version (but not the most reliable one) says that is was the wife of the Karo Syrup company’s manager who found the best way to use this culinary liquid in 1930. Obviously, that was a marketing strategy yet it really worked in favor of the pecan pie which became incredibly popular in the US.

That’s how the dish made its way to the food Olympus. No matter what day Pecan Pie Day in 2022 is going to happen on, Americans definitely regale themselves with the delicacy more often.

What does Pecan Pie Day mean? It means one more day when you can enjoy the delicate nutty filling and crispy buttery pastry beside the aforementioned festivities.

In fact, the pie is so interwoven with American food culture that some tourists come to the country, especially to the south, with the purpose of trying the excellent dessert. It’s praised in the famous authors’ opuses – particularly, in a novel “A Light in the Window” – and TV shows. You’ve got to see the well-known “When Harry Met Sally” series and probably remember the scene called literally Pecan Pie scene.

And the pleasant memories of the childhood spent in the granny’s house; you’re playing in the yard and suddenly feel this sweet and mouthwatering smell. The forthcoming nutty slice is impossible to ignore and you run toward the kitchen as soon as the grandma calls. Those recollections are shared among the many Americans, believe us. That’s why the pecan pie certainly deserves the honor. So, when is International Pecan Pie 2022? It falls on July 12!

The pecan pie is a dessert, the filling of which is made of the nuts and corn syrup (it’s a classic way but not the common) while the crust is a mix of the typical pastry-fit ingredients. However, there is a slew of variations, offering to add a strong drink for the taste, a chocolate for color, or molasses for viscosity. It’s usually served with the whipped cream or ice cream.

Basically, the food industry counts the following types of the pecan pie: spruced up with the butterscotch dose to the stuffing; flavored with several spoons of whiskey and softened with chocolate; refined with the addition of corn flour and old bourbon; seasoned with maple syrup and almonds (not instead of the origin pecans); accompanied with the layers of chocolate and fudge; and the quirky coconut-cracker-bananas thing.

By the way, every pecan pie is able to endow you with lots of healthy points. The nut is full of selenium and zinc, magnesium and iron, vitamins E and B. It boasts the fatty acids that help increase the level of the “good” cholesterol and decrease the “bad” one. The antioxidants, found in abundance in the pecan, favor the process of rejuvenation while the carotene is the eyesight-friendly and prevents atherosclerosis. On top of that, the nut is a good way of the breast and lung cancer prevention.

Write it down, what is the date of National Pecan Pie Day 2022, and move on to the next part of our narration. 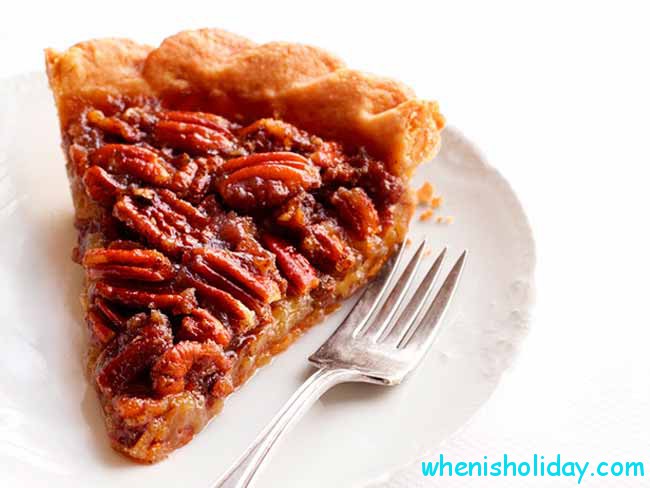 You’ve got it right: to celebrate the holiday you need to grab the nutty slice and put it into your mouth. And some more of them, in the same way. The ideal example of spending National Pecan Pie Day is to visit your grandmother and tuck into her special version which always haunts you in your dreams. If you haven’t such an opportunity, drop by the grocery store (but it’s not that good in the frozen state) or the restaurant, or bakery (much better options).

The scheme we’re going to offer you just now requires the visit to the shop, too. Make the pie with your own hands! Here is what you need: combine the flour, butter sticks, and a tad of salt and rub it in properly. Let it chill for at least an hour. Roll out the paste in the mold and form the sides. Crumble up the half of the pecans. Heat up the butter in the saucepan and add sugar, vanilla essence, molasses, and rum. Whip the eggs in the bowl and slowly pour into the sugary mixture and whisk it together with the nuts. Place it on the dough and bedeck with the whole pecans. Bake for around 50 minutes and serve with the scoop of the ice cream.

Have you already caught this wonderful smell, just like us? Don’t forget to invite some friends to enjoy this unspeakable goodness!

All in all, have it circled in your calendar, when is Pecan Pie Day in 2022, in case you’re a forgetful person. However, forgetting about the pecan pie holiday…no way! We’re sure, you’ll celebrate it properly.