In any country in the world, the holidays can’t be celebrated without the candies – those sweet, colorful, and different in terms of the taste but similar in terms of the adoration treats.

When is National Candy Day in 2022? We’re sure you’re drooling over the keyboard, just like us. Let’s find it out!

Could you imagine that there were the times when the confectionary industry did not exist? People even couldn’t produce the sugar! What poor children there were who never tried these delectable treats.

The very first candies were invented in the Middle East, in Egypt. Back then, during the ceremonial entries of the pharaoh into the cities, the servants threw the special delicacies into the crowd – the dates boiled in the honey. In the other countries of the Middle East, the role of the sweet treats was played by the dried apricots, figs, and nuts with the honey and spices.

On the eve of the new era, Europe got to know the sugar brought in from India and this fact caused the real revolution on the confectionary area. The sugared fruits become not only the favorite delicacy of the folks but also the sort of a medicine: the famous doctor Galen advised his patients to consume a bit of the treat when having troubles with the stomach or the nerves. During the festivities in the houses of the wealthy Romans, the glazed fruits and the almond mixed with the sesame, poppy, and anise were served as the dessert. The sugar was rather expensive back then and that’s why the grassroots used the honey instead. During the wedding, the owner of the house threw the candies into the crowd and those who caught them were proclaimed as the happy persons. No wonder that there were the real battles broken out for being the holder of the sweet piece.

After the end of the Antiquity, the recipes of the candies were forgotten for long. What made them a favorite treat again was the discovery of America where the sailors brought the chocolate from. For years, the people made only the beverages out of it but in the middle of the 17th century, the French culinary experts learned to cover the cakes, nuts, and fruits with the chocolate glaze. In 1670, the cook of one marquis, named Praline, made the very first chocolate candies for his master, with the filling of the grated nuts, later called… the praline.

Also, by those times, the American colonies become good at growing the sugar cane which made the sugar itself much cheaper. The confectioners started to burn the pieces of the substance in the fire and then pour the liquid into the molds adding the fruit or berry juice. That’s how the caramel was born, the name of which derives from the translations of the Latin words meaning the sugar cane. In the same way, the fudge was invented when the cooks added the milk and the butter. A bit later, the world saw the dragée – which is the nuts and candied fruits covered in the sugary glaze.

When is International Candy Day 2022? Well, it’s promised to become another favorite holiday of any person!

In the 18th century, Paris was known not only as the fashion capital of the globe but also as the center of the confectionary industry. The local experts made the candies of the dozens sorts shaping them as the fruits, animals, and birds. They also added the new fillings such as the rum, liqueur, candied roasted nuts, jelly, and marzipan. Of course, each of the confectioners had their own secrets, be it the lemon or the orange or another exotic fruit.

In a word, the Europeans became the great fans of the chocolate candies. In the end of the 19th century, the Swiss engineer created the milk chocolate while a bit later, his colleague established the company that produced the first cheap chocolate candies. However, the Swiss didn’t manage to hold the monopoly for long, in several years, the first place was occupied by the Englishman due to the genius marketing campaign. He came up with the idea of making the candy boxes in the shape of the hearts in honor of the Saint Valentine’s Day. Ofcourse, theloverssnappeditupimmediately!

The Americans were the go-ahead fellows, too. In the end of the 19th century, the confectioner from Philadelphia started to produce the chocolate instead of the caramel. His favorite treat became the small Hershey’s Kisses wrapped in the gold foil. In the neighboring state, the man built the whole town, the citizens of which were involved in the process of the chocolates’ making. Before the World War II, the man integrated the company with another sweet giant to make the candies called M&Ms for the soldiers. The military authorities ordered to invent the sweets that would melt in the mouths of the soldiers, not in their hands.

The holiday itself was invented due to the National Confectioners Association of the United States which annually celebrated the date as one of the professional ones. Regardless of what day World Candy Day in 2022 falls on, we feel the gratitude for those who made the first treats with every bit we put in the mouth.

What does National Candy Day mean? It means taking your time and enjoying the pile of your favorite sweets without the pricks of conscience.

Alas, we also should remember about the healthy and not so influence of the treats on our organism. They damage our teeth and when being consumed in the uncontrollable amounts could entail the other illnesses.

They contain the carbohydrates such as the fructose, glucose, lactose, sucrose, and the like, a bit of the protein, and the small amounts of the vitamins and minerals. The first is the source of the energy for our bodies, they enhance the intellectual and the physical abilities and boost up our mood. They also contain the antioxidants that have an effect on the metabolic processes and prevent the changes in the cardiovascular system and the formation of the malignant tumors. 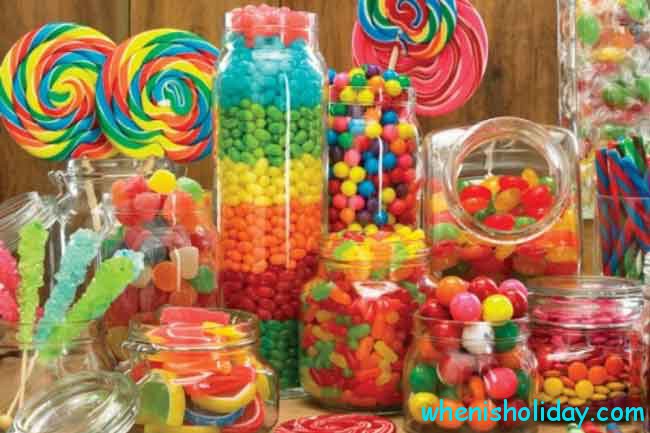 When eating a lot of the candies, our organism gets sucrose which later causes the lactic acid that affects the teeth, damages the enamel, and increases the risk of caries.  As long as the candies have a lot of the calories, the big amounts of them entail the fat accumulation around the waste developing the obesity.

It’s much healthier to eat the candies made of the dark chocolate with the filling made of the cherry, raisins, prunes which are rich in the antioxidants, pectin, iron, potassium, and magnesium. What is the date of National Candy Day 2022? It annually takes place on November 4!

Of course, only the fairy tales tell that the candies are growing on the trees. In fact, it is quite a difficult process using a lot of the today’s civilization’s achievements. Even the word itself – the confectionery – means the hand-made product from the Latin.

In the different countries, there are the different candies that are believed to be the tastiest. Thus, England and the US are fond of the treats made of the licorice, German is in love with the fruit jelly while Italy prefers the ones made of the nougat. The most unusual candies are made in Finland using the mix of the ammonia and the liquid ammonia (they have the amazing salty sour taste).

What is a number of the sweet treats you’ve always wanted to eat at one go? Ten, twenty, forty-five? Be it sixty or even a hundred, go for it! Today is the day and you’re allowed to delve into the super sweet candy craziness.

Mark in your calendar, when is Candy Day in 2022, and spend this day in the sweetest of the moods!