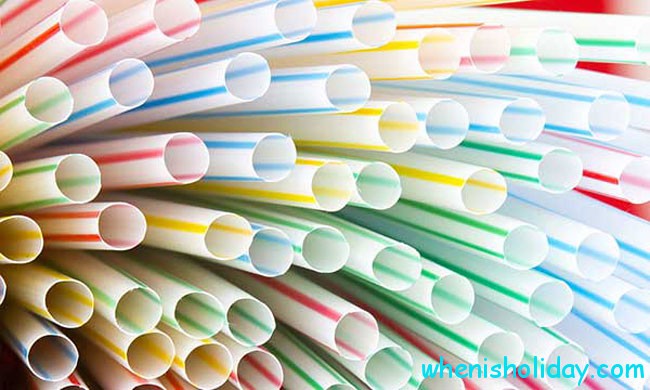 Once you enjoy your cocktail, sipping it through the straw, think of the fact that there is the special date in the calendar carved specially for that tool. This long tube, obviously.

When is National Drinking Straw day in 2020 and why does it have such an honor? Read on!

In the upcoming year, it will be one hundred and twenty years ago, that the owner of the company producing the cigarette holders invented the straw for drinking the cocktails and the other liquids. Interestingly, but when he was asked, what exactly pushed him to come up with such a great idea, he blamed… the depression!

Well, we’ll tell you how this happened. Once on a usual day, he sat in the worst of the moods because the business went so wrong. The competitors were catching up fast, the money didn’t flow in. The best thoughts always came when our hero was drinking a cocktail. Thus he took the glass, plunged the tube made of the rye in and was fully ready to indulge into the familiar state of mind. Yet here was the thing – the rye fibers got sodden and stuck in his teeth. The glass was thrown away, together with the straw, but the desire to drink was still burning his heart. Then he took the piece of paper, covered it with the glue on one side and wrapped around the pencil. The tool was created! But the process sipping the liquid had to be a quick one as the paper got soaked immediately. But that was much better than the rye which also brought the unpleasant taste to the drink.

The further improvement of the invention occurred just several days later. The mister received the parcel from the neighboring state. He paid attention to the stamp which was so beautiful and noticed that it was made of the Manila paper,notable for the great resistance. Why not trying to make the straws of that type? Once said then done! In the end of the 19th century, the mister called Stone patented his creative tool. Two years later, he was already deep into the production of these things rather than into his first company.

The machine for making the useful sticks was created in the beginning of the 20th century. Before that, they were born with the hands of the experts. The following milestone in the history of the straws happened in the 30’s when a man visited his younger brother’s café. At this time, his niece, the little Judy, was trying to bend the tube placed in the high ball. As you may have guessed, the man was the future inventor of the bendable straw.

Weird as it is, but this patent was ignored by almost every straw company he offered it to. Then he decided to finish his business and start the new one which would produce the bendy tools. Ten years later, he became a millionaire. Well, the offspring of Mr. Friedman is also an important part of why we ask today, when is International Drinking Straw Day 2020!

The last achievement in the field of these long tubes used for sipping and slurping occurred in the second half of the 20th century. Will you guess what it was? The man was watching his daughter bathing and unconsciously wrapped the piece of the cellophane around the steel twig. Once the bathing was over, he found out that he was holding something like a drinking straw but the transparent one. He thought that his daughter would be so happy to see how the milk rises up the tube in the process. Yet again, no one was interested in this project, so after the long experiments, he managed to invent the proper tool and made a huge fortune.

In 2006, the Danish inventor suggested the project called the straws of the lives. The point is that the tools would be good for drinking from every lake on this earth. It’s like the small flute, inside of which there are the filters and the iodine. Each of this “flutes” would be able to process up until seven hundred liters of water and cost around four dollars. A brilliant idea, isn’t it?

It seems like today the mankind left behind all these further improvements of the thing. But there are still people who renew them again and again. The designers carry the experiments with its shape, size, and color. The creative people use it for all sorts of the hand-made gifts, decorations, and kitchen helpers!

What does Drinking Straw Day mean? It means sipping at least three liquids through that tube!

Regardless of what day Drinking Straw Day in 2020 falls on, don’t underestimate the power of the thing in the daily matters!

In fact, all modern tubes could be divided into the groups according to their size and the purpose. They actually can be small, medium, big and huge-sized.

The small ones are about 0,33 centimeters in diameter. They are meant for the juices and cocktails served for the children. The medium ones are of 0,55 centimeters in diameter. They are longer and go with the beverages like lemonades and cocktails in the medium glasses. The big straws are meant for the thick drinks. The diameter of 0,75 centimeters is perfect for sipping the juices with the pulp, chocolate and milk beverages. And one centimeter round straws are for the cocktails of the extreme thickness.

Together with the crimped, straight and figured tools, there are straws the spoons. Justlikethetubesofthebiggersizes, they are meant for the thick drinks. Yet the expanded end of the thing does not get stuck with the ice and, on top of that, allows eating the fruits and ice cream, if there are some in the cocktail.

What is the drinking straw? It is the tool shaped like a long tube for taking in the liquids and then swallowing them.

What is the date of Drinking Straw Day 2020? It annually takes place on January 3! 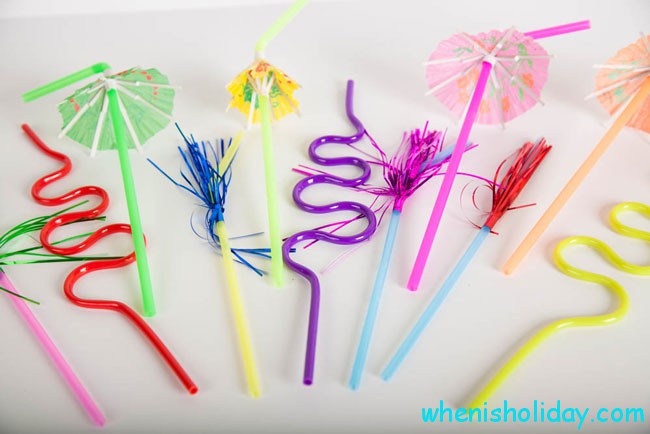 There is always the question hovering over the tubes in the cocktails – why serve the drink with two straws? Infact, it’squitereasonable. First, it’saboutthestirring. Lots of the cocktails should be stirred in the process. So, one of the things is exactly for that while the other is for trying the drink.

Second, it’s about non-stirring. The cocktails with several layers are consumed with two straws because it allows not mixing them and feeling the taste of each layer. One of them is of the usual size, another is shorter and wider.

Third, it is about the romance. Two straws mean two persons sipping one beverage. What a touching way of making them closer! Fourth, it is about the science. Because the number of the capillaryin the mouth is quite huge, the more intensive irrigation of them with the alcohol entails the quicker absorption in the bloodflow and quicker intoxication. While sipping through one tube contributes to the slower absorption of the ethanol, yet more effective. Well, everyone can choose the number of the straws according to their health conditions, can’t they?

The way to celebrate the holiday is one and only – drinking all the liquids you consume in a day through the tube.

Be it the water, juice, smoothie, soup, puree, you are ought to use the tool. Except for the coffee and tea, they are too hot. With every sip, enjoy the great invention!

Make a firm fixture in your calendar, when is Drinking Straw Day in 2020, and spend this day with a couple of cocktails in your hand!

When is National Trails Day 2022