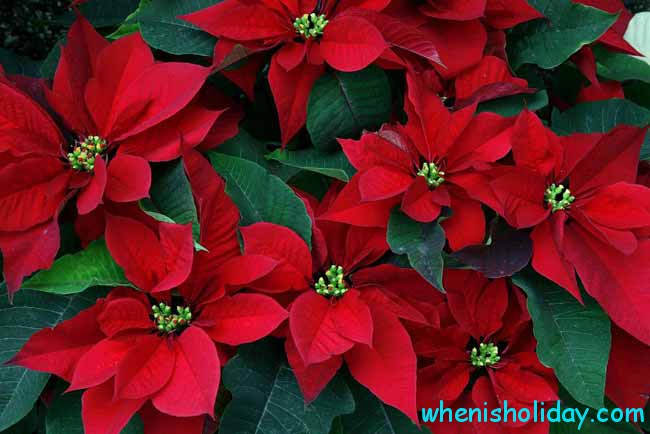 Today we’ll talk about one wonderful flower that warms the soul and creates the Christmas mood in a click. If you are not from America or the European countries, you might have not heard of it at all. Yet it is considered to be the thing the Christmas can’t do without.

When is National Poinsettia Day in 2022? Follow the lines and find out!

But first, where did that flower come from? In fact, the Aztecs believed that it was the true symbol of the purity and often used it in their rituals.

Today, we know it as the Christmas plant. There is a beautiful legend of the 16th century that claims that one poor woman intended to make a gift on the day when Jesus was born, yet she hadn’t money. Inspired by the image of angel, appeared in front of her, she gathered the weed along the road and brought them to the church where they turned into the wonderful flowers.

In the 17th century, the Spanish monks, settled on the south of Mexico, grew that plant by the eve of the holiday because of its scarlet color. Its star-shaped petals were like the star of Bethlehem, and the flower was called Noche Buena which meant the Christmas Eve.

As for its modern name, it’s connected to the person – Mr.Poinsett – who happened to be the first Minister of the US in the Latin American country. Being the great fan of the botany, he transported the stems of the flower to the motherland and shared them with his friends and familiar gardeners. In the middle of the 19th century, the US historian suggested renaming the plant in Poinsettia in honor of its importer. Although the man was a prominent congressman and ambassador, he went down in history as the “father” of the flower in America.

In the 20’s, the plant growing in the wild in South California became the object of the interest of the Ecke family. The people got to grow it commercially, contributing to the image of the flower as the Christmas staple. In a while, the new sorts followed which could be cultivated both like the houseplant and the wild one. The business moved under the roofs of the greenhouses. With time, the poinsettias were sent to many of the countries, being the crucial holiday’s element. By the way, during the long years, the Ecke family was the leader of the poinsettia market due to the secret technology of cultivating them.

Today, it’s no longer the achievement of the American business family. A lot of the gardeners grow this beautiful plant. Nevertheless, the US still makes up 90% of the flower’s export as they are grown in every state and sold in the amount of sixty millions annually. Besides, it’s so popular in America that the citizens even came up with the special holiday which was proclaimed in 2002.

When is International Poinsettia Day 2022? It’s set on the date connected to the life of the person who made it known to us.

What does National Poinsettia Day mean? It means appreciating this amazing little plant for brightening up our days.

The poinsettia is a very unusual flower. First, it has dozens of the names, each of which is popular in the certain countries – euphorbia, Christmas flower, star of Bethlehem. Second, it is undoubtedly lovely – the contrast color of the green leaves together with the colorful bracts definitely emit the celebratory spirit. We’d bet we’re not alone who want to decorate it as the Christmas tree!

The flowers are exactly the things that always bring the happiness and aesthetic enjoyment to the human. Not only can they boost the worst mood up but also to improve the energetic field of the person and of the building they grow in. Any house without the plants seems as the cold and boring one. They clean the air we breathe in and fill the room with the freshness. The poinsettia, according to the feng shui sources, urges us to catch the new wave: for the lost people to find the sense of the life. The flower helps reveal the new characteristics from the deep inside and become determined about the job and the circle of friends.

Today, there are about one hundred of the commercial sorts of the plant. The progress in growing the new ones is aimed not only at the beauty of the thing but also at the longer preservation of the bracts and durability of them during the transportation. The flowers, by the way, can be of the red, apricot, lemon and white colors.

Regardless of what day World Poinsettia Day falls on, it’s always a good idea to become an owner of one!

The poinsettia is the plant of the euphorbia family. In the countries of the Old and New Worlds, the houses are traditionally decorated with this pretty houseplants as they create the flair of the true celebratory atmosphere.

The plant is originally from tropical forests of Mexico and Guatemala. In the wild, it grows as the bush of up to four meters high. The leaves are dark-green and can be up to fifteen centimeters long. The flowers are gathered in the round inflorescence, the colorfulness of which is for the insects to be drawn. After the period of blossoming ends, the flower loses the share of its leaves. Although it does contain the milky juice, it’s not poisonous for the human yet cause some irritation of the skin and eyes if gets on them. 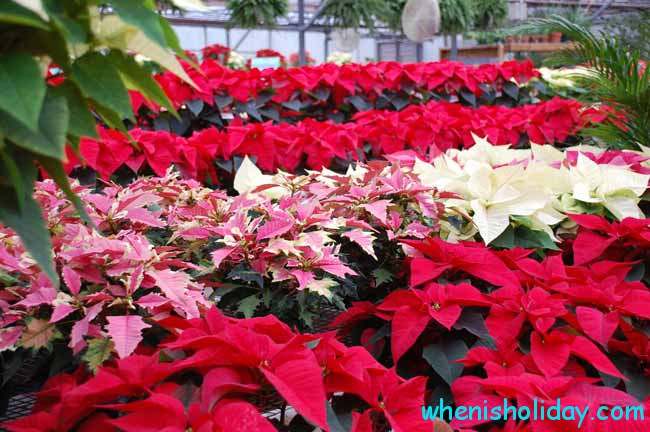 Of course, there are some secrets that will help prolong the days of the plant in the house. The most important thing is that it should live in the sunny place yet protected from the direct sun rays. The most comfortable temperature would be something around +18…+22°C. Watch for the leaves not touching the cold glass as well. Remember about the constant humidity around the thing, spraying the air frequently. Once you see that the soil in the pot is dried out, water the poinsettia immediately with the warm and soft liquid as the cold one would cause the drop of the leaves. Protect it from the wind, too. Both from the cold from the outside and from the hot from the radiators. Another important thing is not to transplant the poinsettia.

Usually, the flower is grown specially for the holiday and in a while is sent to the trash. Little of us know that it should be grown as the perennial plant with the annual winter blooming. Spread the word among your fellow gardeners!

What is the date of National Poinsettia Day 2022? It occurs on December 12 – the day of Mr. Poinsett’s death.

The name of the observance implies that it is a perfect opportunity to obtain one the Mother Nature’s creations and make it a dear guest at your house. Or, at the house of your mother, granny or friend… In a nutshell, if you’ve never placed your hands on the pot with the poinsettia growing there peacefully, then fix this by buying the plant and giving it as a present to someone.

In case you are already a happy owner of the Christmas red staple, then feed it with something tasty on that day. For example, with a fertilizer. And don’t forget to watch for the proper conditions the flower lives in!

Make a firm fixture in your calendar, when is Poinsettia Day in 2022, and bring the bright colors in your house for the whole year!

When is National Service Day 2022