If you think that this date is about American feral horse, then you are sort of an insult to the millions of the car enthusiasts. Because this one is about the one and only – the mesmerizing Mustang of Ford company production.

When is National Mustang Day in 2020? Several lines on, you’ll find it out!

Everyone knew, still knows and will know that American Ford – the inventor of the mass worldwide car production – has always had something creative inside its factories to surprise the planet with. One of the brightest achievements of the engineers – the hero of our article – was born in the 60’s and won the hearts of the sports car lovers immediately.

The background actually was not so rosy. The company incurred great losses when examining the sports vehicles market and trying to build an all-new generation of the cars. The Edsel model didn’t invoke the rapture among the public but the experiment was already launched and it had to be fixed somehow. That’s why they made up a team of the fresh designers, constructors, economists, and PR experts to invent the “saving” model.

First, they developed the image of the vehicle. Analyzing the customers’ preferences, the team saw that they wanted to witness the further generation of the Thunderbird with the less sky-high price tag. The composition of the body was adopted from the Lincoln Mark II, with its long hood and shortened trunk that created the dynamic silhouette. The aggressive notes were added with the narrow bumpers, the beast-like nose of the Maserati, and, of course, the running figure of the mustang on the radiator. Speaking of the name, originally, it was planned to call it the Cougar.

On March 9, 1964, the very first Ford Mustang saw the light of the day having descended from the production line in Detroit. The model was rather fast and small, compared with the other sports cars,and was able to accommodate up to four people. Plus, itfeaturedtherealfoldingroof! The engine was the 2,8-litres V6. The popularity of this automobile was so huge that there were the long lines formed in front of the sales offices. Probably, the key element of the car’s success was the cool exterior design. Well, that’ how the total imitation of the Mustang’s style by the other car manufacturers could be interpreted. Mercury Cougar, Chevrolet Camaro… aren’t they like the good old Mustang?

An interesting fact: the answer on when is International Mustang Day 2020 is not the date of its birthday. Well, it would make sense, wouldn’t it?

A year later, the world got to know the modified vehicle with the “GT” prefix before the name. It featured the fixed suspension, sharper handling, improved brakes, and the special color of the body. By the end of the 60’s, the client could buy the model in one of thirty-four colors available! Then, the engineers cooperated with the Shelby company, the result of which was the legendary Cobra.

The changes – even the smallest ones – were brought in constantly. Each year, the models introduced the new detail such as the addition or the reduction of the dimensions, the wider range of the engines – from the 3,3-litres V6 to the 7/0-litres V8, the bigger horsepower supply (up to 355bhp), and the better transmission, both the automatic and the manual.

From 1978 to 1993, the third generation flourished. It was elongated once again and made lighter. The further restyling gave the world the mighty Mustang SVT, capable of 238bhp. Those fifteen years of production gladdened at least two and half millions of people with the new four-wheeled friends. By the way, it was also sold under the name of Mercury Capri. Why? Who knows…

Having heard about the Chevrolet plans on reviving the much-loved and respected Camaro, the engineers were urged to develop the fourth generation of the car. It was widely produced for eleven years, until 2004, and shared the exterior design with the model of the 1964 year. Of course, there were the all-new details like the restyled headlights and the bumpers, the distinctively shaped hood, wider air intakes and more prominent wheel arches. The good old symbol was covered with the chrome-plated border while the other good old part – the engine – was empowered with 260 horsepower and acceleration up to 240kph.

Regardless of what day World Mustang Day in 2020 falls on, we hear about the model a bit more frequently. Since 2000, every modification of the vehicle is the top news in the automotive industry.

Another great introduction of the better versions of the car happened at the end of 2003 in honor of the ten year anniversary since the first SVT model construction. It was presented in two modifications – the coupe and the cabriolet, to catch some sun while you’re driving down the road in the fancy Mustang. The company caused quite a fuss when claimed that the total number of the models would be just two thousands and three. All of them were equipped with the 4.6-litre V8 with a peak output of 390 horsepower.

In 2005, the world met the brand-new generation of American legend. The improved range of the engines, the modernized platform, and the more aggressive exterior – this beast was a ferocious one. On the inside, it was restyled down to the door handles; now it was really modern and stylish. Nine years on, the vehicles’ aficionados rejoiced at the sixth generation of the car, and a bit later, in 2015, the model finally entered the European markets.

In the same year, the holiday was invented by the close circle of the true Mustang’s fans. Doing some math, we see that it’s only two years old but it already gained the worldwide popularity. Just like the car the holiday honors! 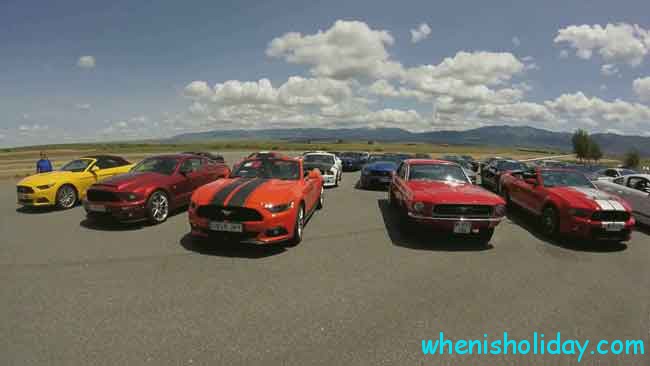 This one is the most popular muscle car and, on top of that, is a cult one. Can you call all movies that it was spotted in? A year after it descended from the conveyor, the Mustang got into the filming process. Since then, it became a real movie star with more than five hundred episodes in its career! Among the biggest roles are “Gone in Sixty Seconds”, where it played Eleanor which Nicolas Cage drove skillfully; “Transformers” where it was called Barricade and feature the transformer disguised as the police car; “I Am Legend” where the 2008 model of the Mustang gave a lift to Robert and his Samantha the dog; “The Fast and Furious”; “Death Race”; “Wrong Turn” and the like.

You probably know that the car got its name right before its introduction to the public. The major role in the choice of the name was played by Henry Ford II. Because of the misfortune affair with one Italian woman, the engineers were forced to give up on the previously discussed “Torino” version. So, they sent one of the members of the team to the library with the instruction of searching for the appropriate name of an animal. From the thousands of the species, five were considered – the bronc, puma, cheetah, colt, and mustang.

What is the better way of celebrating the date except for letting your Mustang out? Okay, if you haven’t one, you can revel in the legendary vehicle with the help of the pictures on the Internet or, probably, by drooling over your neighbor’s four-wheeled excellence!

Mark in the calendar, when is Mustang Day in 2020, and pay tribute to the cool invention of the Ford company.

🧘‍♀️ When is Registered Dietitian Day 2020

🎆 When is National Day of Singapore 2022