WhenIsHoliday.com
Home America 😲 When is National Face Your Fears Day 2022 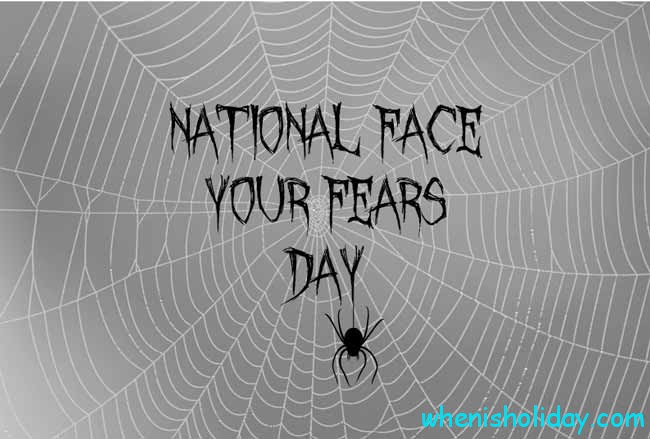 What’s your point of view – does a person should deal with or avoid their fears and phobias? Should they step decisively on board a plane knowing that it’s the second safest transport under the sun or miss the countless opportunities to explore the world because of the air crash anxiety? Should they step up to the fear of communicating with people or lock themselves up in their room suffering from the lack of it?

Both of the second options are definitely less attractive yet easier to accept. Don’t let yourself be led by your emotions that hold you back! The perfect way to begin taking control of them is the day invented specially for that. When is National Face Your Fears Day in 2022? Let’s find it out and learn how to keep your fears in check.

The evolution proved us that a man has no unnecessary thing, or feeling, inside. The fear just like the other emotions performs its own function. Our ancestors were guarded by it from the sudden attack of the predator. It helped gather all the strength to fight and survive. It was a kind of catalyst that always urged to be prepared for the danger and unexpected occurrences.

That is to say, the fear is the essential part of the human being. Yet we are ought to conquer them constantly, especially when it hinders your life and growth. Probably, this was the discourse Steve Hughes got inspired with when he proclaimed the holiday back in October 2007.

His example is a model one. Once on a dinner with his relative, Steve was challenged to make a five minutes performance for the stand-up show. Advertiser back then, he had no experience in humorous public speaking and of course had his doubts on this affair. Yet only for seconds because he pushed himself out of the comfort zone without any long reflections and agreed!

What do you think happened next? He received a call from the lawyer’s company and was asked to come and show the fellows how to be funny. Several years on, Steve turned into the professional conference speaker and emcee educating on drawing the attention of the audience and making your message listenable.

Quite an interesting story of a person whom we should thank today for having an opportunity to ask – when is International Face Your Fears Day 2022!

What does National Face Your Fears Day mean? It means to bring your courage and look right in the eye of your biggest fears.

The more people are afraid of ruining something, saying the wrong words or letting themselves or oneself down, the more they are seized by the anxiety. The habit of being scared, worried, nervous doesn’t let them think freely and act determinedly. This leads to the dissatisfaction with the life and blaming the others for the failures. Once giving in to the feeling of fear, the person gets used to responding in the same way for the second time. The way that is suggested by the instinct of self-preservation, not by the mind. The dread of those who surround them, of being different, destroys all the creativity in the individual and makes them unable to look at the things fairly.

To overcome the fear, we should know why it appears.

Some of the phobias arise because of the lack of knowledge. Oftentimes, it has a lot to do with the situations when a man has to start something for the first time. He’s never done that before, he has no experience and that’s why there are the shivers down their spine.

Other phobias feed on the previous bad memories when a person failed to succeed in the matter, felt the pain, suffering and it seems logical that they are afraid of it being repeated. Another part is based on the fear of the death. The strongest one on the laundry list of the phobias, it makes people dread to lose their or the closest person’s life.

Regardless of what day World Face Your Fears Day in 2022 falls on, we have to handle them and keep under the control. Let’s learn how!

Fear is the inner state of a person caused by the imminent distress, real or supposed. It is an emotional process heavily tinged with the negativity.

There are several ways of how to stand up to one’s anxieties.

The first is just do it. Get used to acting immediately in spite of your hair standing on end. Realize that it is a common reaction that comes from the attempt to do something alien to your nature or something that opposes your beliefs. Tell yourself – yes, I’m afraid, my limbs are trembling, yet nevertheless, I’m going to do that. The more you delay, the more it penetrates into your brain. But once you are to make the first step, the fear evaporates.

The second is to learn the worst of the outcomes. It’s a pure psychology. If the anxiety occurs, think of the most hateful aftermath of your intention to do the thing you’re now dreading. When you see its real face, it’s not a threat anymore. The most powerful weapon of the fear is the unawareness. We think that it’s big and serious and that we can’t live through what’s about to happen. Just evaluate how valid your phobia is. If it’s reasonable, listen to it because it might be the defense mechanism of your body that prevents you from the troubles. If the worst possible outcome is not that bad, then push forward to act! 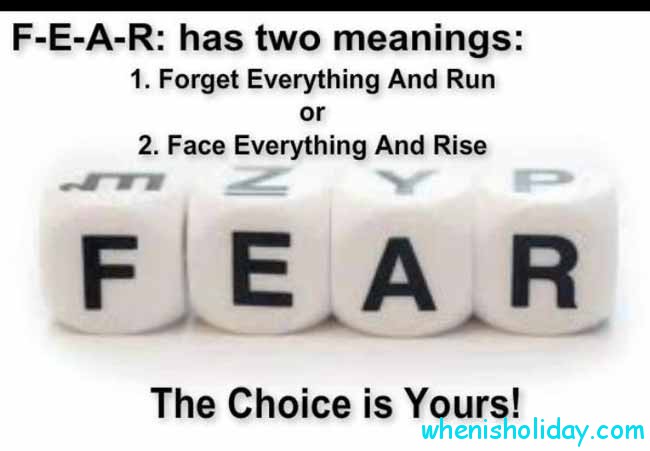 The third way is about to make a decision. It is the determinacy that makes you bring up your spirits and face your dreads. When you make yourself feel confident that you can, the fear gives in. In fact, it feeds on the emptiness, uncertainty, and doubt. Once you’re sure of what to do, all of these are wiped out as there’s no way to go back. The feeling of fear disposes the mind to the negative outcomes while the determination is about the positivity. You take the decision, you focus on how great would it be to step over yourself and what results would it bring. Yet remember that it takes only one little negative thought creeping in your head to give rise to the dozens of such.

What is the date of National Face Your Fears Day 2022? It’s staged on October 13.

The point is simple – step out of your comfort zone and say “no!” to your phobia, be it the fear of the open water or the fear of talking to the strangers.

You know what you are deathly afraid of. And it’s already a big advantage because it means that you can be prepared. Ask yourself the questions on the nature of your fear and analyze it as thorough as you can. Emotions are always stronger than the logic that’s why you need to visualize yourself beating those miserable anxieties. Get yourself comfortable in the armchair and replay the picture of how you first swim in the sea or offer help to that bewildered man with the city map in his hands. Your mind does not distinguish the imagined events from the real one. After you overcome the phobia several times in your head it’ll be much easier to deal with it in the process as the subconsciousness is already familiar with that situation.

Carve a space on your calendar, when is Face Your Fears Day in 2022, and be sure to get over your anxieties and always strive for the new achievements without the fears behind your back.