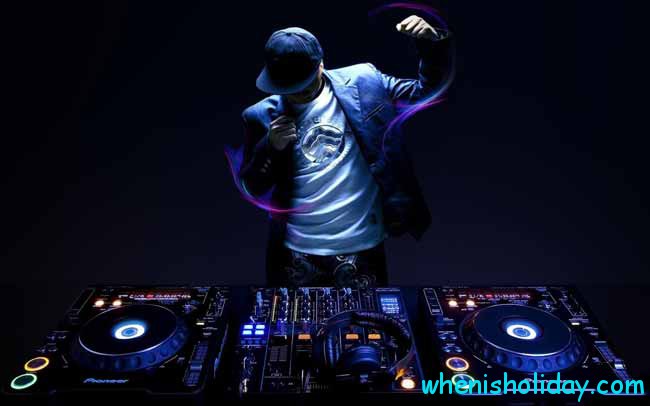 Who creates the mood during the parties? A DJ, of course! By the way, the full name of this entertainer is a disc jockey, not everyone knows that.

When is National Disc Jockey Day in 2020? Let’s see what we’ve got on this point.

Nowadays, there are dozens of the opinions about the time of the profession’s origin. Some experts think that it dates back to the 19th century when the very first gramophone records appeared. Others claim that the djing was invented in the middle of the 20th century, putting it more precisely, in 1934 when the American commentator first pronounced the word “disc jockey” referring to the guy called Martin Block.

At the moment, he was a popular anchorman on one of the radio stations and noticed for playing the different records with the various songs to get the audience know the new music. The modern DJs who perform at the nightclubs were born in the US during the 70’s. That was the time when the music sounded nonstop and the people who entertained the crowds got called the disc jockeys for playing the records and turning the songs into the one flow of the energetic music.

The origin of the djing wasn’t an accidental event. It happened due to the various reasons, including the economic ones. It was clear that the musical orchestras playing the live music were quite limited in the repertory and were not able to give the visitors of the nightclubs the opportunity to dance to the more diverse music. On top of that, employing the whole orchestra was rather expensive for every bar and pub.

The companies producing the gramophone records churned out the hundreds of those with the songs of the different music groups. So, at the end of the 60’s, all clubs fired the music artists and singers and started to employ the operators that out the necessary records which they thought the crowd wanted. After that, the whole world got absorbed into the nightclub life’s rhythm. A lot of people received huge advantages: the visitors finally could dance to any kind of the popular music, the nightclubs swam in the rivers of the profit as the flows of the people jumped vastly and the stuff was reduced almost in half. You see the logic in here – why pay the musical group when you can hire a disc jockey?

The evolution of the profession was rather quick. First, everyone played on the reel-to-reel recorder because there were no records with the good songs. Thenwas thetimeofthevinyldiscs and part of the DJs replaced the gramophone records with the vinyl. After creation of the compact discs and the different gadgets for their playing, the boom of the DJ’s profession came. Today, the CD is one of most widespread music carriers.

When is International Disc Jockey 2020? You probably think that it has to happen on the hot summer day and be celebrated during the summer night but, in fact, the holiday takes place in winter!

The further development of the technologies in the 21st century gave birth to several more types of the djing. The progressive DJs now mix the music with the help of the special computer programs. They are still called the DJ but it goes for the Digital DJ. Some entertainers play the songs by the mean of the different programs that allow them to connect the vinyl recorder or the compact discs to the computer and imitate the play of the gramophone records.

Of course, the new programs are invented daily. For example, one of the most recent apps lets the DJ create the composition right on the spot and turn the flow of the popular song into the absolutely new melody with the help of the midi-controllers.

What about the history of the holiday? Well, some Internet sources claim that it was initiated in honor of one influentialDJ called the Moondog. We are not sure whether it’s true or not but anyway, there are no any other records on that point!

What does National Disc Jockey mean? It means appreciating those invisible bees that keep you smile and dance in the nights.

The key to success of any party is a cool DJ who does not just change the records but also creates the mysterious atmosphere that draws you into the world of the wild dances. One may think that there is no anything hard in the profession of the night entertainer and they can learn it for two days… In fact, the real DJs need to have the excellent ear for music, be a charismatic, funny and talented artist to keep the audience involved and become famous.

Regardless of what day World Disc Jockey Day 2020 happens on, each of their days is like a holiday, isn’t it?

One of the most popular “features” of the DJs’ skills is the remix. Actually, it is the product of the work of the disc jockey themselves, sound engineers, and producers. The remixes become know to the world in the middle of the 80’s and are loved by the audience since then. However, sometimes the definition of the word is not used correctly. The main difference between the remix and, say, just mix is that the latter consists of the several different melodies while the first consists of the one song only. The DJ adds the various effects, loops and samples, changes the style of the music and the speed of the sounds keeping the most important ingredient untouchable – the original notes. The sense of the remixes’ creation is in the reviving the popularity of the song. They obviously give the second birth to the melodies that are long forgotten even in ten and twenty years after their peak. Sometimes, the remix becomes more popular than the original song because of the creative view of the DJ who wins the hearts of the new listeners.

The history of the nightclubs culture owes its development to its founders – the DJs. They are like the warriors of the turntables and experts of the vinyl. Today, they are really popular and respected, even the little child knows who the disc jockey is.

What is the date of National Disc Jockey Day 2020? It occurs on January 20.

The turntables and other special equipment are used by them to mix the compositions. While using the non-vinyl music carriers, they can change the speed of the sounding to make it more smooth, and use the different sound effects such as the scratch. Thus the mix of the other authors’ compositions is turned into the independent melody at the hands of the skilled DJ. The improvisation adds some points, too.

The most important purpose of a true disc jockey is to motivate the audience to dance. The good DJ is not the one who has the high-quality tracks but the one who can rule the crowds, drive them into ecstasy. One comes, another goes away, some become popular, and other is long forgotten. The tastes change, the fashion changes and the musical preferences are changed as well. But the real disc jockey who was born to be at the desk and turn the public on can leave the scars in its hearts by their skill to make the excellent music.

What is the best way to celebrate the holiday? Throw your own party and try on the image of the disc jockey! If you’ve always wanted to look at yourself in such a place, then it’s high time for you to try. On your own party, you are ought to be a king of the evening.

Mark in your calendar, when is Disc Jockey Day in 2020, and spend that day dancing to your own music!

🍮 When is National Caramel Custard Day 2022