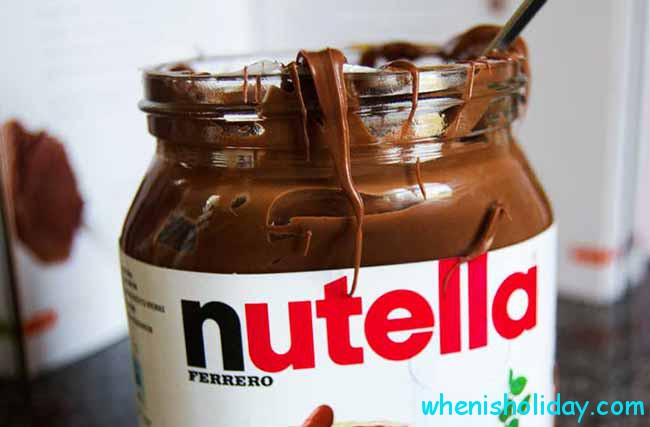 If you are a child, you certainly know what Nutella is. It is one of the most delicious kinds of spread in the world. Hazelnut and chocolate are the main tastes of the mass. The spread is used in many desserts and sandwiches. The use of the mass is so huge that people initiated a special celebration when you can eat the tasty thing even with a finger. When is World Nutella Day in 2020?

The product was created by an owner of a bakery. The territory where he lived was known for an enormous production of hazelnuts. In 1946 P.Ferrero produces the first part of the Pasta Gianduja and sold it. He didn’t put much cocoa into the mass but he put many hazelnuts. At first the mass was solid. Five years later the mass became creamy. Ferrero began selling the spread using the name “Supercrema”.

The start of its history was in 1963. A new stage in the mass’ production was initiated by Ferrero’s son, Michele. He made his best to promote the modified product throughout the whole Europe. He used the widely-known name at the first time. The product was at first made in 1964 in April at the Alba factory. From that time the mass has been very popular.

In 2007 the first occasion was celebrated. The idea of the date was not initiated by the Ferrero company. The initiator was a blogger from the USA, Sara Rosso. She proposed the observance while living in Italy. There’s no explanation why the day was initiated. Besides, the observance is in February, though the first selling of the spread happened in April.

The event came under the rule of Ferrero Corp. in 2015. This fact let the observance become more massive and affective. Several supportive things were proposed to the observance by the company. Besides, the company even started its own site where the organizers represent their plans for the celebration of the holiday and the results of the annual observance.

The product celebrated its 50th anniversary in 2014. The fact was commemorated by creating a special stamp devoted to the tasty mass. It cost 70 cents. It featured a jar. The anniversary was celebrated in May. “What day National Nutella Day in 2020?” It’s on the 5th of February.

What does Nutella Day mean for the majority of people? The date wouldn’t become so popular, if people weren’t so greedy for sweets. The day is a real entertainment. People usually use it for having some sandwiches with tasty product. The product is always a symbol of careless. You can even feel as a little child when you eat a sandwich with sweet mixture.

The date is a great chance of uniting with children. It is obligatory to give the mixture to children. It doesn’t matter what kind of a treat it can be. You are to give your children joy and happiness. It is not just sweet mass but also good mood.

Organizers of the holiday always try to make a great holiday using the day. They make many various events which are suitable also for children and adults. Those who like contests can also find suitable variants for their entertainment during the date.

The occasion is also a great time to advertise a café or a restaurant with a special meal. Many chefs make various desserts on the day and set a special price which is available to any client. You can visit kids’ cafes and have some rolls with sweet chocolate mixture.

The date may be used by adults for creativity. They can draw with Nutella with their children and make sweet body-art. The main motto of the occasion can be “Funny and Tasty”. When is International Nutella Day? It’s on the 5th of February.

The term is so popular that there is no need to translate the word to people from other countries of the world. The product is sold more than 130 countries. If people hear the name of the holiday, they know exactly that they are to taste the mass during the whole day.

The word wasn’t known more than 60 years ago. The term is the brand name of the mixture which was created in 1964. The mass was manufactured by the Italian company. It was initiated by a man, Ferrero by name.

The patent was given to the spread made with hazelnuts and cocoa. It’s also very sweet. Producers include skimmed milk and vegetable oil into the mass. Many dictionaries describe the main content of the product. Besides, some of them include the fact of the naming the product according to the given patent.

Hazelnuts are one of the main parts of the product. The Canadian and American variants certainly contain soy products. It is forbidden to name the product the as “chocolate cream” in Italy. According to the local laws, such mass has to contain a certain amount of cocoa solid. The name “Hazelnut cream” is widely used in some countries. The original recipe admits that the spread has to contain almost 20% of chocolate and more than 70% of hazelnut paste. What is the date of World Nutella Day 2020? The occasion is celebrated on February, 5th.

If you want to celebrate the holiday, you should buy Nutella for yourself or your relatives. If you are a brave person, you can taste it with a finger. You aren’t just to eat the product. You can try the mass in your favourite recipe. You can use it on a toast or make a tasty sandwich. Try to put it on a banana muffin. Other recipes are in the internet.

The product isn’t expensive nowadays, that’s why it is easy to find many other meals with this mass. Children especially like Nutella. They eat it with a toast and with a spoon. American children eat it every day for breakfast and lunch, though the product is very nutritive. It is important to limit its usage.

Women can make a tradition starting the day with cooking some pancakes with Nutella. They can even propose their daughters to make the Nutella topping. The pictures of the meal can be posted in the internet with the corresponding hashtag.

One of the best ways to celebrate the occasion is to buy as many jars of Nutella as you want. The best variant is to give a present to every your relative. The dearest people will be grateful for that. Family breakfast or a dessert time is a wonderful chance to spend the event. You can also visit any café in your town which proposes desserts on the occasion. You should find events in the internet: “When is Nutella Day, calendar of events?”. You’ll find the holiday on the 5th of February.

You are to pronounce the term as “new-tell-uh”.

Day of the graphic designer