The topic of this article is a thing which affects us every day. Those people who can see have the advantage of being able to orient themselves visually, which makes them safer on the road. But if a blind person wants to cross a road, he or she has to make a series of preparations to do it safely. A blind person has to rise his white cane to show to drivers that he or she wants to cross the road and understanding of this sign is very important. It was proposed by the governments of many countries to create a special day for blind people, which was called White Cane Safety Day. So, you will ask when is White Cane Safety Day in 2020? October, 15 is the date of this special day which was established by International Federation of the Blind in 1970. White Cane Safety Day is a symbol of a blind person. It is a sign that helps to remind the society that there are people with disabilities around us and they need our help.

The history of the establishement of  White Cane Safety Day

For the first time, the white cane appeared in the United Kingdom in 1921. A young photographer James Biggs was blinded in a road accident. Learning to live anew, a young man had to pass many difficulties, in particular – to move through the city with a cane. It was an ordinary black cane. But soon after it, Biggs realized that no one pays attention to his black cane – neither foot-passengers, nor drivers, which made it difficult for him to move.  Then he decided to make it more visible and painted it white. This decision gave him immediate result and everyone nearby saw his white cane and understood that he was blind. Soon such solution was developed not only in the United Kingdom but also in Europe and America.

In the middle of the XX century, the government of America and European countries had started the educational work on problems of blind people – and later it was proposed to establish a day to pay attention of society to the problems of blind people and help them with it. For the first time, White Cane Safety Day was commemorated on October 15, 1964, in America, and throughout the world it has begun to be commemorated since October 15, 1970.

On this day in many countries, people hold different seminars and practice courses which explain in an intelligible form how blind people live, and how we can help them. Often different competitions and tournaments are held, where sighted people are blindfolded with a scarf and, in this case, they have an ability to feel how the blind person feels. TV, radio and other media systems speak on October 15, when White Cane Safety Day is in 2020.

Why is it hard to be blind?

The main problem of blind people is that they are locked in the solitude of their own room. As a result, they lack conditions for a normal life – like going to the mall, for a walk, to a drugstore, to a workplace. The movement for the blind man is full of barriers even in his own home where he lives all his life. It is the reason why the governments of cities create relief sidewalk for blind people, which helps them to orient themselves. And there exist some special sound of traffic lights, which are very useful, as they give a hint when you can cross the road.

What should I remember when talking to a blind person?

For a blind person, a cane is not just an accessoire, but his eyes: with its help, he can understand where he is, feel road obstructions (border, pothole, puddle, fence, stairs).  A cane helps him to understand where houses, cars, shops, or trees are.

If you communicate with a blind person, remember that: 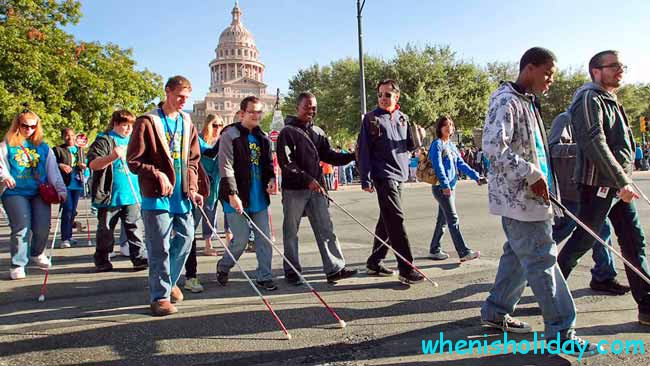 On October 15, when White Cane Safety Day is in 2020,   health services, numerous public and religious organizations deliver their speeches in many countries: they organize seminars and  television programs. It is necessary to attract the attention of the widest social circles toward the problem.

What is the day of White Cane Safety Day in 2020? The calendar does not show it as a holiday. Yet, many TV programs and festivals are organized, especially it is popular in countries of the former Soviet Union. The main purpose of these festivals is to attract children and adult so,that they could realize themselves, as creative people.

Young performers have an opportunity to appear on stage with such stars, as Tamara Gverdtsiteli, Valerie, Diana Gurtskaya, Alexander Oleshko and others. 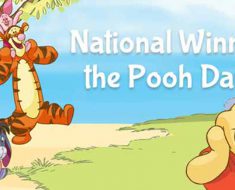