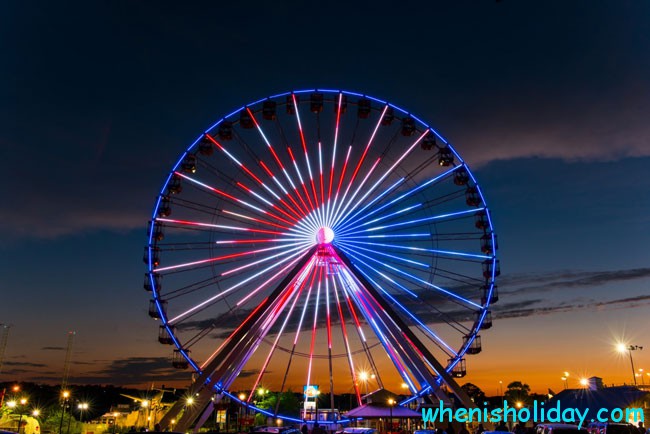 In general the idea of building the world’s first item belonged to George Farris, who developed this attraction in 1893 for the World Exhibition, which was held in Chicago. Its height for those times was unreal – more than 80 meters. Now there are samples, which are much higher. All in all what can be more beautiful than climbing the height of a bird’s flight and from there watch the life of a huge metropolis? Do you agree with us? We are almost sure that yes. However, can you answer the question “When is National Ferris Wheel Day in 2020?” without any prompts from our side? – No? – Oh, well, be attentive then, as we are going to introduce you this theme in details.

Discovering the matter, concerning what day World Ferris Wheel Day in 2020 is, we can’t but mention the historical background of this event, celebrated annually on February 14th. The date wasn’t chosen occasional. This day but in 1859, George Washington Gale Ferris, Jr, the inventor of the first entertainment, was born.

In 1891 during the Conference of Building Engineers Chicago had to host the 1893 World Exhibition, Daniel Burnham, the exhibition director, asked еру engineers to eclipse the Eiffel Tower, which was the peculiar feature of the 1889 World Exhibition in Paris. 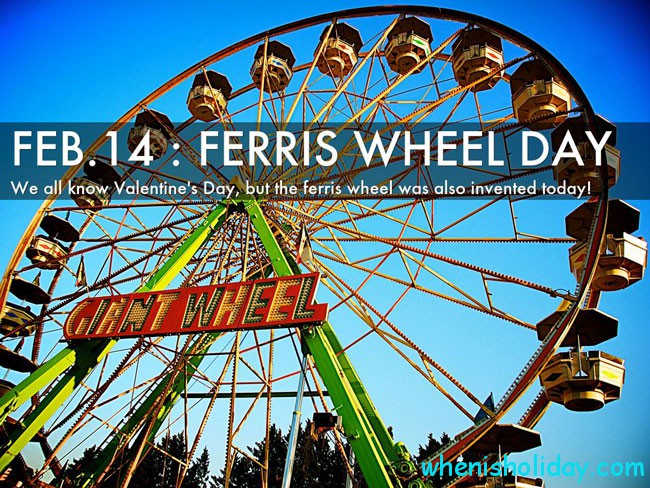 Organizers received a lot of projects, but almost all of them were unoriginal. Basically it was proposed to build a higher tower. Even Alexander Gustaf Eiffel himself sent his project, which again amounted to building a tower higher than Paris. And at the same time Bernham received dozens of letters of protest from leading American engineers indignant at such an unpatriotic approach.

The young engineer, called George Ferris, had a brilliant idea. – Once during the dinner time discussing various projects with colleagues, he remembered the wheels of water mills that he saw as a child on the Carson River in Nevada.

Until the end of the dinner, he drew the sketches of a giant observation wheel with visitors’ cabins on the napkin. Most of his colleagues found the project absolutely impossible, but Ferris was insistent. He spent $ 25,000 of his own money to create drawings and develop exact specifications for the structure. And finally, on November 29, 1892, the exhibition administration agreed. However, they did it under one condition, in contrast to the Eiffel Tower, the construction of which was partially funded by the French government, Ferris had to find the money to create the wheel himself (and he did it). In addition, the construction was taken only 22 weeks (and during the cold Chicago winter).

What does National Ferris Wheel Day mean? Frankly speaking, it is up to you to decide, whether to celebrate this day or to forget completely about its existence. There is a great amount of these things all around the planet. But, perhaps, the most famous is the one, which is situated in the British capital city.

The struggle for obtaining a building permit took two years; given the location of the site – opposite the Palace of Westminster, – the issue was discussed even in Parliament. However, the construction process itself took only 16 months, despite the fact that almost all the techniques had to be developed from simple almost amateur drawing.

The giant British Attraction was put into action on the eve of the new millennium and immediately gained immense popularity. Every year more than 4 million people “fly” on it. This landmark of London is third in attendance – after the British Museum and the Tate Gallery.

Preserving all the characteristics of a conventional item, the Eye of London is a new and much more complex variety of it. When lifting 32 observation cabins, the support structure does not enter the field of view of the people in them. The wheel is rotated at a constant speed of 26 cm / s.

Passengers enter the cabs from the ground platform, and those who have already made a “flight” leave the cabins. The wheel can simultaneously accept up to 800 visitors, working non-stop. An exactly balanced mechanism received just 500 kW of power, the cost of electricity – a few cents per visitor.

Talking about the question “What is the date of National Ferris Wheel Day 2020?” we would like to give you many interesting facts.

For example, have you ever heard that nowadays the largest attraction of this kind is arranged in Singapore. For 37 minutes, required for the wheel to make a full circle, it opens not only amazing views to the embankment, but also to the neighboring islands. The Attraction in Singapore is equipped with 28 cabins, each of which can accommodate 28 people. The cost of the Singapore Flyer ticket is $ 21.

A rare tourist, who visited the capital of Great Britain, doesn’t ride on the famous attraction, which is still considered to be the largest in Europe. The wheel is equipped with 32 cabins, each of which symbolizes one of the suburbs of London. The cost of a half-hour “session” is about $ 30. However, if you want to occur inside it would be desirable to book tickets better in advance on the official website. And by the way this will allow you to get a 10% discount, and also avoid tedious queues.

When is Ferris Wheel Day in 2020, calendar will surely remind you. This is not a problem in fact. The date of February 14th is considered to be fixed, so it won’t be difficult in fact. You can be involved any year you want and would like.

However, do you know how to celebrate this special occasion in a proper way? – We will help you then. The best variant is to ride this attraction in any place you are. If it is not impossible, just devote February 14th to discovering the world famous things in details. Nowadays there is a great amount of pieces of information about it, including documentaries, travelling brochures, books, articles and Internet sites.

Discussing the question “When is International Ferris Wheel Day?” we want to give our readers as much interesting pieces of information as it is possible.

Not everybody knows that most of the parts of the first Attraction were made in Detroit and 150 wagons were delivered to Chicago. In such a way the sketch on the napkin turned into a wheel 80 m in diameter, setting on an axis almost 14 m long and 2 m in diameter. It was the largest forged piece, which was ever manufactured in the United States.

The support, which rises 45 m above the ground, went 10 m deep into the concrete foundation.  36 cabins are able to accommodate 60 visitors each. The total weight of the structure was 4100 tons.

Initially a 10-minute trip cost 50 cents, and in the 19 weeks of the exhibition nearly 1.5 million visitors took the wheel, which brought the organizers almost $ 730,000 in profits.

But the attraction brought not only glory, but the series of problems to the inventor. Administration did not pay the required share of profits to him. All the attempts to sell the idea of attraction to other entertainment parks were unsuccessful. As a result, Ferris fell into depression and on November 21, 1896, at the age of 37, died all alone in the Pittsburgh hospital. It happened that the idea survived the inventor and nowadays the item has become an indispensable attribute of any urban entertainment park.