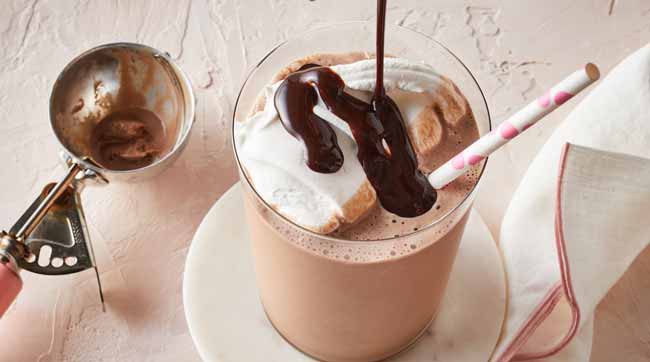 When is National Chocolate Milkshake Day in 2022? Well, we are almost sure that you are going to be rather surprised to discover the holiday like this in the contemporary calendar. Yes, indeed, the Chocolate Milkshake Day there is in the list of the modern special occasions. And today we are planning to do everything possible to tell about its peculiar features in details. Are you with us? – We are starting!

As you perhaps understand initially we are planning to represent you the historical background of the event as the matter what day Chocolate Milkshake Day in 2022 is, is not as easy and clear as it may seem at the first sight.

The first written mention of the milkshake is dated 1885. It happened a pretty long time ago, didn’t it? Then one of the British newspapers wrote about the milky invention, represented by a delicious, healthy drink, which included milk, eggs and whiskey. Yes, the first milkshake was an alcohol one. The inventors took blended whiskey, cow milk and chilled everything carefully. Actually the drink composition resembles the recipe for so-called eggnog, that considered to be a very popular mixture in the 1880s.

The milkshake, as a drink, we all buy and adore today, was only made in 1922. It happened in a minute network of Walgreens pharmacies, arranged on the territory of the USA. Trying to make chocolate malt better, the careful staff representative Ivan Coulson mixed 2 servings of ordinary ice cream, ordinary cow milk and a potion of chocolate drink prepared from powdered milk. As a result, thanks to this simple invention, a tasty and highly appreciated contemporary milkshake was born, and Coulson went down in history.

Frankly speaking, we don’t know for sure why we have to celebrate this occasion on September 12th every year. The name of the establisher is unknown as well. Perhaps, on September 12th the drink was introduced to the public for the first time, or it was nothing but a successful marketing decision, organized by somebody in order to earn additional money in this sphere.

What does Chocolate Milkshake Day mean? – Well, actually, it is only up to you to find out whether to celebrate this holiday or not. It is difficult to believe, but in the modern world there are many men and women, who don’t drink milkshakes for different reasons. Some of them are on a diet, for example, others do not like the taste.

Actually, we don’t know who and why decided to change the well-known name “eggnog” to “milkshake”. In fact, there is no any fundamental difference between the eggnog and the first drink with whiskey. In any case, everything that is done is for the best. In the course of time, the congener eggnog has been changed significantly. The list of new components appeared in it, but more than a century has passed before it turned into a known milkshake.

However, this is only half the story. Would you like to know, how milkshakes turned into a phenomenon of this as well as past centuries? Well, firstly, in 1922 it was still very difficult to make a milkshake: whipping ice cream took much more time and energy than a regular martini cocktail. Milk shake inspired humanity to create another important invention – an electric device. Yes, today we are able to use a blender to do any thing you would like to, from favorite protein items to cabbage smoothies, but in 1922 Stephen J. Poplavski created the device for this category of drinks. It was a real miracle.

The question “When is International Chocolate Milkshake Day 2022?” needs the representation some additional pieces of information.

According to one of the versions, this milk-egg cocktail with the addition of a small amount of alcohol (whiskey or brandy) was invented by the British. Pretty soon, the eggnog was highly appreciated both by Europeans and by Americans. The Europeans decided that a cocktail with hot milk would be tastier, and the Americans replaced whiskey and brandy with rum, although, nothing prevented the addition of rum, whiskey and brandy to the drink at the same time. Cocktail was prepared in large dishes and served at parties, for holidays, at the family table for Christmas. By the way, we can’t but mention that actually, the main ingredients for the drink were not cheap, because the cocktail could not be called popular.

The last element in this chain of chocolate milkshake growing success was Ray Kroc. He was an ordinary seller of electric blenders. After that in the 1950s, Kroc introduced mixers to the local businessmen, two brothers Macdonald. The place already had significant potential, and therefore Kroc was recognized as one of the franchise owners. As a result, he became the owner of the entire blender company and brought it to global growth.

When is Chocolate Milkshake Day in 2022, calendar will surely remind you. And as a rule, there are no any difficulties with memorizing the date. The holiday has a fixed day of its celebration, so the only thing you have to do under the condition you are going to be involved is to remember that it will happen on September 12th.

As you perhaps understand there is no a universal way to celebrate this holiday. Of course, in the USA you can find cafes or even restaurants, which will be great to treat you with something special on September 12th. As a rule, if the owners know about the holiday, they may propose you something special for a favorable price.

If it is not impossible for any reason, just prepare the drink at home and organize a real testing party for your surroundings.

Discovering the question “What is the date of Chocolate Milkshake Day in 2022?” in details we came to the conclusion that our followers would be rather glad to receive some additional pieces of information concerning this direction. So today we are going to represent you a list.

All in all milkshakes are not the ordinary drinks. why? – The matter is that in the course of time they managed to inspire numerous inventors to create something special. A straw belongs to these inventions. One day in 1930s sitting in a pastry shop on a pretty warm evening, amateur inventor Joseph B. Friedman noticed his daughter trying unsuccessfully to get a drink with the help of a straight-paper straw. Then his fantasy mind presented a bending tube, through which one could drink a cocktail without any special problems. As you understand, this led Friedman to create a successful business, which brought him a fortune.

By the way, have you ever heard that an ordinary milkshake is thought to be a real hero of crime chronicles? Initially everything happened in 1963, when re representative of the CIA tried to kill the famous Mexican President Fidel Castro using a poisoned cocktail. The similar situation was in 1965 in the Canadian city of Vancouver, when one man decided to kill his wife.  He sprinkled some arsenic on her daily cocktails. And finally in 2003, Nancy Kissel gave her man a berry item with sedatives, after that beat him to death. At least is there any other drink with such a criminal arsenal?

In general, we can’t even imagine our life without this tasty drink! In the States, a hamburger and a milkshake have been generally thought to be the perfect meal. And nowadays this popularity becomes more and more widespread all around the planet.

When is National Sense Of Smell Day 2019