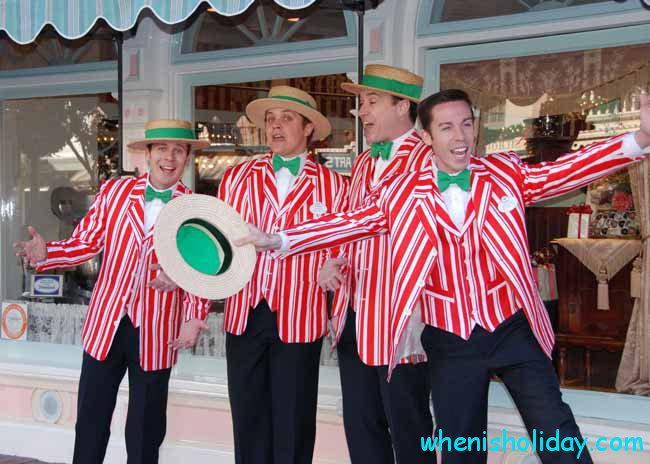 When is National Barbershop Quartet Day in 2020? Do you know it? – Have you ever heard about this holiday existence? – Frankly speaking, we were rather surprise to find out that the holiday like this does exist in the contemporary calendar. Its name sounds really amazing, doesn’t it? This is the reason why to make the situation clear we have decided to discover the matter in details.

Talking about the theme what day World Barbershop Quartet Day in 2020 is, we should represent our readers a great amount of amazing facts. As a rule, our readers are especially amazed in the historical background of any event.

The huge immigrant flow brought numerous patriotic hymns, religious psalms, hearty folk songs and other things to the USA. These compositions were often performed being divided into four more or less equal parts and sung in low voices only. Beginning from the second half of 19th century, the so-called minstrels were shown in the United States very often. They performed various amazing songs about romantic life on the plantations. Later, these shows were displaced by vaudevilles. However, the beautiful tradition of collective performing songs, consisting of four parts can be seen even today.

In accordance with historian’s points of view, the first official using of the adjective “barber shop”, in relation to the singers, dated back to 1910. It happened together with the release of the awesome composition Play That Barbershop Chord. By the way, we can’t but mention that by the time of its release, the term had been already widely known all around the country. 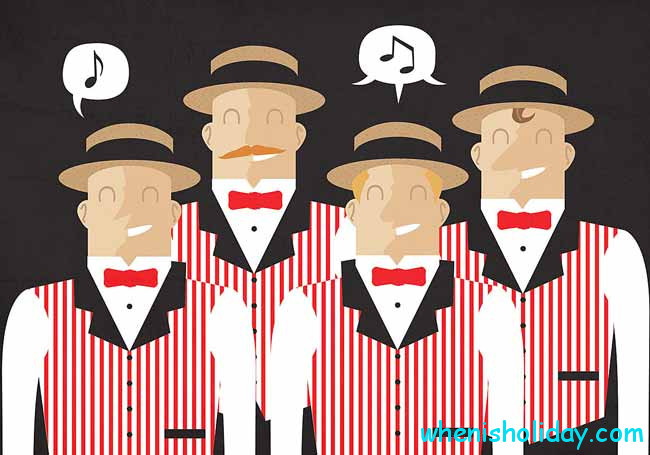 The real distribution of this style throughout the country began with the phonograph appearance. In the beginning of 1900s, the success of selling recordings on carriers depended on the preferences of the masses in music. This is an explanation why songs with plain melodies and words on simple topics of life were often chosen for recordings. In the so-called era of Tin Pan Alley, many professional quartets tried to occupy a niche, which helped to strengthen this style of performance in the recording market.

Unfortunately, we don’t know for sure why we’ve to celebrate this special occasion on April 11 exactly.

What does National Barbershop Quartet Day mean? In fact, it is only up to you to find out whether to pay close attention to this occasion or not. Frankly speaking, it is not new (or even quite old) and only a few contemporary people know for sure about the existence of this musical direction.

All in all the style under the title “Barber Shop Quartet” is usually associated with so-called black musical collectives of the southern regions, appeared in about the 1870s. What was the secret of their popularity? – The matter is that the harmonious “breaking” of the tender chord and cozy improvisation were characteristic of African singing groups. Traditionally Black American musical collectives were located in the Barbershop, for instance, in Joe Sarpy’s Cut Rate Shaving Parlor situated in St. Louis or Jacksonville, which is Florida.

Music in this style was very requested and desirable between 1900 and 1919. Modern quartets of that period were wearing costumes typical of vaudevilles, represented by striped vests and straw boatmen’s hats.

Together with the radio appearance, there was a significant shift in the US popular music. The music became more complicated and the old songs could no longer adapt to the jazz compositions. They were not so demanded, because people couldn’t dance with them. Nevertheless, the quartets sounded on the radio. So the style itself was still relatively popular, however, from that moment its actual decline began. In the 1920s, the style gradually disappeared.

Discovering the matter “When is International Barbershop Quartet Day 2020?” we would love to represent our readers some amazing details.

The Barbershop Quartet is considered to be a style of vocal popular music, which was originally started in the first half of the 1900s on the territory of the United States. It is represented by an ensemble of four people, not accompanied by the instruments of male voices mostly. They are tenor, bass, baritone and soloist.

The stereotypical representation of the hairdresser quartet is the ensemble of male dandies, who are wearing striped vests and straw hats. Initially, the style was formed from amateur assemblies of singers, which preferred to use the premises, belonging to a local barber shop. This is an explanation, why the collectives were called in the existing way. Although white-skinned singers often sing in this style, some historians believe that it comes from African American culture.

When is Barbershop Quartet Day in 2020, calendar will remind you as usually. The only thing you have to remember is that it will happen as usually on April 11. The date is fixed and regular and it denotes that you have to be involved any year you like or would love to.

Of course, there is no a certain way to celebrate this holiday. It is not an official one that is why it is unnecessary to expect any special events organized by local authorities.

However, you can devote this day to something really unusual or amazing. What about listening to the corresponding music at home? By the way you can even organize a themed party and it will be really interesting for the whole company. The particular dress code and the cookies will be great bonuses.

Nowadays it is recommended to find a lot of musical compositions, belonging to that style and that period. If you are sick and tired of the crowds of people, stay at home, watch the documentaries, listen to music or read something.

The question “What is the date of National Barbershop Quartet Day in 2020?” needs a lot of clarifications and explanations. This musical direction is not very popular at the present, that is why it isn’t a great surprise that a great amount of contemporary people have never heard about its existence in the calendar of unofficial holidays.

When the tax attorney called Talsy Owen Cash (born Owen C.Cash) traveled around Kansas City and met his colleague Rupert Hall in the lobby of the Muehlebach Hotel. During the conversation, they discovered the same love for the style of hairdressing quartets and noted its decline. Having decided to stop this sad process, on April 11, 1938 they called themselves the Society for the Preservation and Propaganda of Hairdressing Quartets in the USA.

After that they together with some friends organized a special club with the same name.

At the first festival, only 26 people were present, but at the third festival the number of people had increased up to 150, which led to traffic jam near the building. The appearance of traffic jam attracted journalists to the event, which Owen Cash took advantage of, saying in an interview that SPEBSQSA has a national scale with philias in St. Louis, Kansas City and other territories of the country, referring to its friends (who did not even know about this event) , but the reporters did not understand.

As a result, such an advertisement, as well as an unusual name, led to the emergence of a multitude of communities in the northern part of the United States from one coast to another, speaking on behalf of SPEBSQSA.

Nowadays known as the Barbershop Harmony Society, SPEBSQSA is the largest company in the USA as well as in neighbouring Canada, with about 23,000 members, and it actively supports performers of various genres of vocal music.

When is National Wear Red Day 2017

When is National Day of Unplugging 2020

🌃 When is National Skyscraper Day 2022