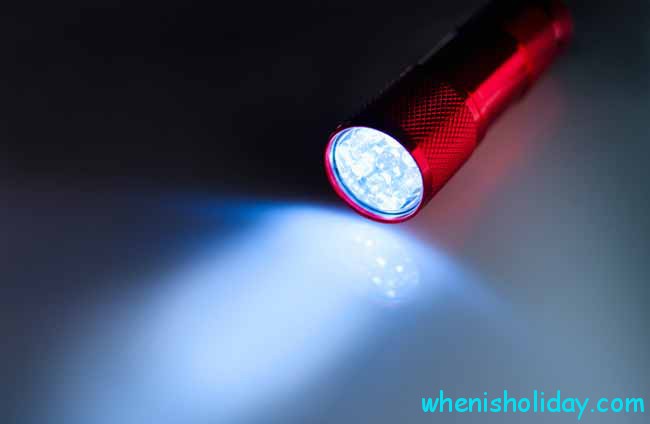 It might sound a bit weird but the good old flashlight – this simple tool carried in a pocket – was invented only at the end of the 19th century, long after the electricity and the electric light were known to the world.

When is National Flashlight Day in 2022 and why did it take so many years to think the device up? Follow the lines!

Even in those ancient times, when the man discovered the fire, he looked for the ways to carry it with him. First, it was the burning branch of a tree and then there were thetorches, candles and oil lamps which are still used, by the way. Yet all these tools had the same downsides – the insecurity, impracticality, and emission of the harmful substances.

According to the historical sources, one of the main reasons for such a late invention of the flashlight was theabsence of the dry cell battery. Putting it simply, the batteries that wouldn’t spill anything whichever way you twist them. The very first sources of the electric current looked like the containers filled with the liquid that was the electrolyte and thus the things were not that portable. So, talking about the birth of the flashlight, we can’t help mentioning the name of Carl Gassner who made the non-leaking battery at the end of the 19th century as the chemicals were kept in the container made of the zinc.

The idea of constructing the electric light source appeared by chance. One man, called Mr. Cowen, was an inventor and a big houseplant enthusiast. Once on an utterly usual day, he was busy at illuminating his favorite plants with the glow lamp, the battery of which was hidden in the flower vase.He glanced at the houseplant and was really shocked by the amazing look of it. In fact, he wasn’t the first human who connected the incandescent lamp to the battery. His fellow, Mr. Hubert, was a go-ahead sort of a guy and quick to understand that those portable tools would be good for selling.

Yet before, the thing lacked some improvements to enter the market. The man was just a fortunate clerk, not a genius of the tech. That’s why he invited the professional inventor named David Misell. Together, they created the electric light source shaped as the tube which could be held in the hand – the original prototype of the modern flashlight. It was very large due to the big dimensions of the glow lamp, with the carbon fiber inside, and of the portable battery. Alas, theinventionemittedadimlight with batteries themselves being rather poor. Afterthecontacting, itglowedforjustseveralseconds.

By the way, this explained the name of its descendant which is the hero of the question – when is International Flashlight Day 2022. The thing was used as the source of the flash to illuminate something for a moment. Two colleagues went on to work together and bring the tool to perfection.The real success was bestowed on them when they came up with an idea of giving the thing out to the policemen of New York. They thought that the electric device must have been useful for the guardians of the law. And it worked out! The inventors received lots of the positive responses from the police as well as from the media that covered the new product in details. The result was the great increase in the selling.

The original model has changed many shapes and forms since then, yet the main concept – the look of the cylindrical tube with the installed electric batteries – is preserved.

What does Flashlight Day mean? It means taking this hand-held tool that generously sheds the light on the darkness to pieces!

The flashlights are literally for everyone. Who of the living creatures can expertly navigate in the dark? This quite an ordinary situation – when the whole house goes off and the candles are nowhere to be found together with the matches – could be easily saved by a smart fellow sometimes also called a torch. Moreover, it is perfect for the long winter nights that come about 3pm and last till 8am.

On top of that, the flashlight is a proper mean of the self-protection! First, it blinds the criminal creeping from behind and second, could be used as the decent bludgeon.

Another great idea is using the device, together with the mobile phone and some coins, as the photography equipment. It also takes the skillful hands and the sharp intellect. The coins go for buying the burger which could be eaten on the spot yet the box must not be thrown out. Build the simple construction similar to the reflector. Add the camera of your smartphone and take the pictures of the professional quality!

Regardless of what day Flashlight Day falls on, don’t underestimate the daily power of this thing.

The today’s torch has gone a great way from the simplest tool to the modern LED device which made a kind of revolution in the field of the portable light sources.

Nowadays, no one would be amazed at seeing the electric thing that could be recharged many times or could have no batteries inside. Instead of them, there are the reliable tried and tested accumulators. Moreover, there are some flashlights that have neither the batteries nor the accumulators. They use the inductive energy or that of the sun and called dynamo flashlights.

The LED elements allow saving the big amount of the batteries’ energy. Thus the device shines brightly for days! ThesmallLEDsandthetinybatteries contributed to the creation of the flashlight as a trinket.

The tools are divided into the two main categories. The bright ones, with the halogenlamps, are used by the police, military forces, and the rescue services. The usual electric light sources are used by the majority of people for the everyday needs. Besides, there are the hand-held flashlights, the forehead ones, for the bicycles, camping, and night reading sessions. 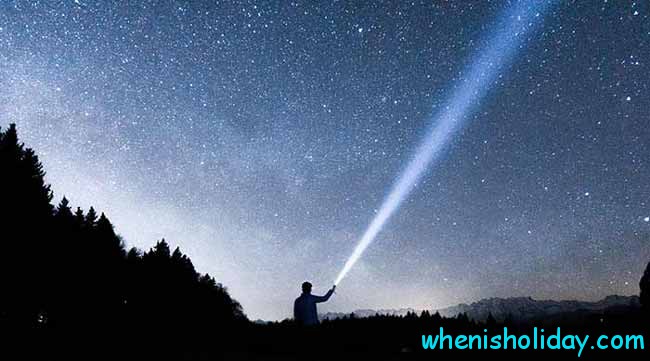 Today, the bodies of the things are made of the firm plastic, sometimes covered with the rubber for the more comfortable grip, or of the light aluminum alloys with the handy hollows on the handle. The new technologies push the flashlights forward, creating the various forms and colors and also the main characteristic such as the safety and durability. Well, saythankstotheinventionoftheelectric lamp and the glow lamp for the chance to see the flashlight in reality!

What is the date of Flashlight Day 2022? It annually occurs on December 21st.

If you’re wondering about the way to celebrate this quite unordinary holiday, we’ll give you some ideas!

First, you can spend the night (on the eve or after the daytime of the holiday, whatever) reading a book under the blanket with the flashlight in your hand for the better seeing. Remember that from the childhood?

Second, why not browsing the Internet for the nearest cave and exploring it with your friends, all of you armed with the best light sources? Rather a goose-bumpy adventure, isn’t it?

Third, organize a bicycle ride on the evening with the head flashlights! This could be easily staged together with your near and dear ones instead of the usual dinner. Will they agree? Of course, they will!

Mark in your calendar, when is Flashlight Day in 2022, and buy one if you still haven’t this great device.

When is National Catfish Day 2022