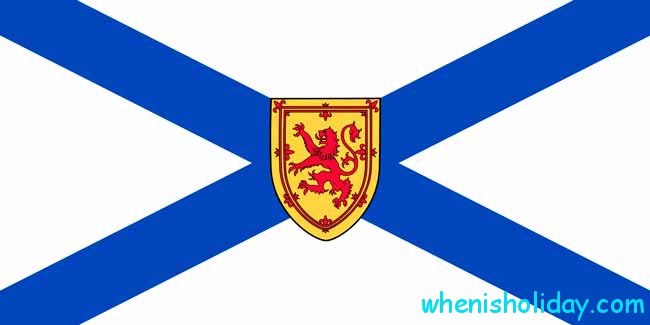 Every country annually has lot of holidays though they may be statutory or not. Local traditions aren’t usually taken into account. There are very few holidays which are known as statutory. People have days-off which are fully paid every year. Canada’s states also have such festive dates. What are Nova Scotia statutory holidays in 2017?

Nova Scotia has several public festivals which are annually celebrated. The holidays aren’t usually working days. If they coincide with a week-end, people don’t work on the previous Friday or next Monday. The days are observed in the country ever year but a payment isn’t fully given to employees on every date.

Nova Scotia stat holidays 2017 are not obligatory observed in all provinces. The 1st day of a year is an obligatory statutory holiday. Canadians don’t work on January, 1st, though they get a full quantity of payment. The date is followed in all the country’s provinces without an exception. In 2017 the day’s set on January, 2, because January, 1 is on Sunday.

Christmas is a religious observance which is a set date and is regarded as a statutory festival. Canadians never work on the day except on jobs that need a 24-hour presence. If a date is on a week-end, the next Monday is a week-end which is fully paid.

The next statutory observance in Nova Scotia is Canada Day. People have a paid weekend. The right is protected by the Canadian Law. Every qualified employee is paid on such a holiday. In 2017 the festival is on the 1st of July. People can come to the province. But they should get the information beforehand. It’s better to write the internet request “2017 Nova Scotia public holiday”.

On Labour Day the authorities prohibit retail departments and businesses to stay open. The owners of such stores must not make their employees work on Labour Day. The purpose of the day is to give employees the last chance to have a long rest, to prolong summer days. Labour Day is held on the first Monday of September. In 2017 it’s set on the 4th of September.

Good Friday is observed on Friday before Easter Day. In 2017 it’s held on the 14th of April. It’s a day of mourning. People usually spend it preparing for the Easter Day.

The observance started in 2015. It’s not a usual holiday commemorating the nationally accepted events. The day commemorates events and heroes of Nova Scotia. In 2017 it’s set on the 20th of February. It’s not celebrated in the whole country but Nova Scotia made the holiday a statutory date. People are free of their work and get a fixed pay.

People of Nova Scotia commemorate the memory of Viola Desmond. The woman was a fighter for black people’s rights. The woman’s deeds became a start of good changes in the province. It’s a tradition to close all educational establishments, business centres and other offices on the day though, if you want to attend a bank, it’s possible. Transport changes are rare on Nova Scotia Heritage Day.

One of provincial stat holidays of Nova Scotia is Natal Day. In 2017 it’s set on the 7th of August. The holiday is always set on the 1st Monday of August. Natal Day is the province’s birthday. People usually make huge festivals. Flags are hung everywhere. Local authorities make grandiose cakes, communal picnics, sport competitions and other activities.

People have an official date on Monday but festivities continue for 7 days. The remarkable festivals are held in Dartmouth and Halifax, Nova Scotia’s cities. These provinces make parades, family activity, communal breakfast, and other interesting activities. On the date around the Macdonald Bridge that’s the link of two communities people can see several fireworks. It’s a tradition to hold a special church service in every community.

The majority of employees are paid on the day. Department stores, shops are partially closed. Business centres and offices may be open and closed according to a contract. Visitors must admit that due to huge festive programs in the local communities there are lots of closures on roads. It’s better to check a traffic schedule beforehand. Heritage Day’s a well known civic holiday of Nova Scotia in 2017. 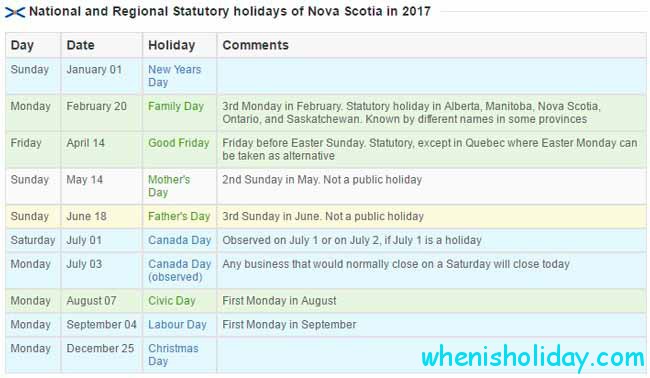 What to do in Nova Scotia

This Canada’s province is a very interesting, beautiful place which is famous for its cities, nature. You can see a wonderful place, the Bay of Fundy. People can watch seals, dolphins and whales. If a person is interesting in making photos, he can catch a chance.

The best way to find friends during a statutory holiday is to visit a communal breakfasts and picnics. Nova Scotia’s people are said to be very friendly. National food can be attractive too. Yarmouth’s lobsters are very popular among local people and visitors. There’s the Citadel Museum in Halifax. It’s a rather unusual place. Another place to see is Cape Breton National Park. Its landscape and habitants are very famous among guests.

Everything in Nova Scotia has a Celtic character, due to its history. Every guest can find something unusual, charming in Nova Scotia’s nature. Great photos can be done at its coastline, bays and beaches. Parks and trails are good places to walk and rest.

The cities of Nova Scotia are very loud and bright. Visitors spend statutory holidays gaily there. If you’re a strong supporter of peace, calmness, you’d better visit a small village and fish in a company of rural dwellers. To see the buildings, which are 200 years, you should visit the Waterfront Area. This territory is untouched in spite of a rapid growth of Halifax. Another interesting place is Peggys Cove.

“Statutory holiday pay Nova Scotia in 2017” is a usual request in the province. Young people are interested whether they have rights not to work on one of six holidays.

When is Free Shipping Day 2017