Do you know that the first programmer in the history of the world didn’t even know the word “computer”? Perhaps, you’ll be more surprised to find out that it was… a woman. On top of that, she did her remarkable thing at the times when the ladies were strictly discouraged from science.

All of those together bring a major problem that underlies the holiday we’re going to talk about today. When is National Ada Lovelace Day in 2022 and why her deed is so illustrious?

To begin with, let’s learn a bit more about the woman’s biography. Ada came into this world at the beginning of the 19th century and was the long-awaited child of the poet Byron and his dear wife (which he gave the sobriquet of “the Queen of Parallelograms”). The great father – the great daughter, told the nature! Yet Ada never saw her parent as Lord Byron left the family. The first name of the newborn girl was Augusta, as the name of Byron’s sister, but it was changed to more pleasant variation.

Not wanting the daughter to follow the path of the too fiery and easily carried away husband, the mother invited the mathematician from Scotland and the famous Mrs. Somerville to be the tutors for the child (probably, with the main purpose of knocking the literary urges out of her). The latter became the role model for the young Ada.

Around those times when she turned 17, she heard the name of Charles Babbage from Mary and several weeks on, got to know him better. The man was the professor in Cambridge and by his means, Ada got the chance to get to know lots of prominent figures in the history of her country, such as Faraday, Dickens, etc.

Babbage worked out the plan of the general-purpose computer that would be able to make the calculations down to the twentieth number of the decimal places. At the first half of the 19th century, the prime minister granted the money to start the building of the Difference Engine. Yet the ten following years weren’t enough while the money was spent in the decent amounts. The construction was stopped.

About that time, Ms. Byron was turned into Mrs. Lovelace marrying the Lord. In spite of three kids, the huge manor and the role of the family fireplace keeper, she was absolutely absorbed in her “hobby”, that is the math. In fact, the marriage provided her with the constant source of financing.

The countess came to the pinnacle of her ardor for math with the help of Babbage and their mutual friend. In the middle of the 19th century, the man was invited to Italy to hold the lecture on his never-finished offspring. It was recorded in French by a young Italian student and Ada was asked to translate it into English and to supplement it with commentary. She spent about a year on that work. After that, the opus was published and appeared to consist more of Ada’s commentaries than of the student’s records.

One of those notes gave birth to the reason why we ask today, when is International Ada Lovelace Day 2022. The hand of the genius woman described the algorithm for computing the Bernoulli numbers on that thing of Babbage. Hundred years on, it was announced that she revealed the first program to be implemented on that computer and thus became the very first programmer.

The holiday itself was created on the motherland of that bright lady at the initiative of Suw Charman-Andersen. In March 2009, she posted a kind of pledge called Ada Lovelace Day for the Internet users saying to write about the female in science or tech which they are inspired with on a certain date. But only if a thousand of people would be involved. In fact, there were two thousands of the folks engaged together with the big coverage in the most major newspapers of the Great Britain!

Since then, this observance takes place annually in October. In the land of its origin, there is a sort of round table staged by the organizations of the same name. Here, the prominent women talk about their own way to the peak of the science and encourage the listeners to follow their dreams and move forward.

What does Ada Lovelace Day mean? It means showing the world that there is no place for the sexism in science, technologies, engineering and math and inspiring women with the brilliant role models like Ada Lovelace.

Some scholars make their researches during the decades and leave behind dozens of the works which, alas, come to be forgotten once the authors pass away. The great daughter of the great poet managed to went down in history with the negligibly small yet so significant fifty-two pages of the book. For more than a century, her name was silenced. Some years ago, you would not have seen it in the books because it belonged to the woman. And the woman’s lot, back then, was bringing up the children and spending her spare time in the kitchen.

Regardless of what day Ada Lovelace Day in 2022 falls on, we should never let the gender discrimination to define who should be allowed to pursue the STEM fields.

Ada is a woman who foresaw the Information Age inventing the first ever computer program. In 1975, the US got involved in creating the new programming language. When they thought of the name, the head of the group looked through the historical information and resolutely confirmed the name “Ada”. This was the tribute to the person whose contribution to the world science consisted of less than fifty pages. But this half a hundred pages was the genius vision of the future. 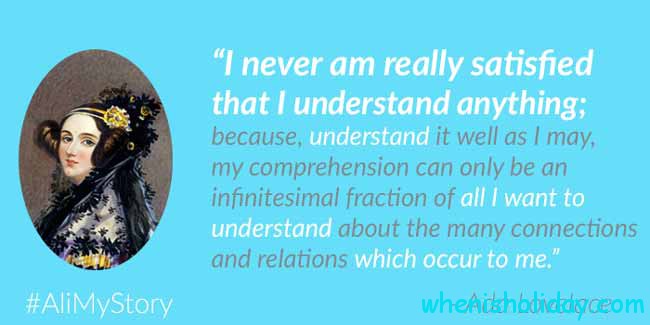 There were a lot more of those outstanding ladies who were recognized years after their achievements.

Cecilia Payne became the first person in the history of Harvard to get the PhD in astronomy. Her work actually was related to physics but the head of the faculty couldn’t be convinced enough to bestow a woman with such a serious degree. Cecilia made a revolutionary suggestion that the stars mainly consist of the hydrogen and are not like the planets. This idea seemed so ridiculous that she was forced to write at the end of her research that the conclusions were apocryphal.

Mary Somerville not only did introduce Ada to Babbage but also became the second female scientist in Britain whose contribution received the general recognition.

Hedy Lamarr first was known to be the most beautiful woman and actress in Europe and only then as the mathematically gifted person. Together with her friend, she invented the encryption of the signals with the help of which the US could gain an advantage in the WWII. Today her creation underlies the technologies used in Wi-Fi and GPS systems. However, back in the 40’s, she was refused to join the group of inventors with the ironical advice of advertising the bonds.

What are the ways to celebrate this inspiring holiday?

Learn a bit more about the first programmer and the women we’ve touched on in our articles. You can find a hundred more examples of the female scientists who were obviously underappreciated in their work because of the prejudices.

Is there a lady in your family whose passion is science; who works for the good of technology’s progress; who can easily beat a man in the engineering skills or who is engrossed in reading the math books on the evenings? Then show your deepest respect for her work! She is one of the many others honorable women who push our world forward in the fields that dozens of years ago were considered to be utterly unwomanly.

Carve a space on your calendar, when is Ada Lovelace Day in 2022, and launch a good tradition of annually telling about the female friend or relative of yours who dedicates her life to STEM!