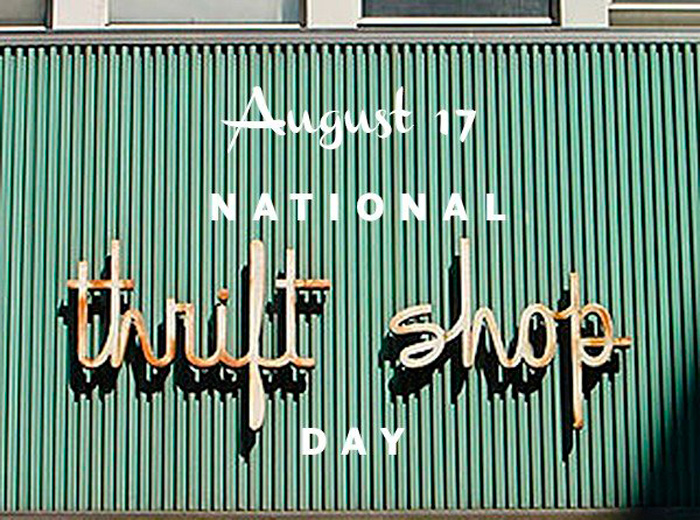 When is National Thrift Shop Day in 2022? Have you ever been told about this terrific holiday existence? As a rule, modern people don’t know about it even under the condition of being the frequent guests in these benefit places. We find this situation to be unfair one, so today we want to introduce you this special occasion in details. Would you like to join? – We are starting!

Talking about the matter what day Thrift Shop Day in 2022 is, we can’t but mention some facts, concerning the historical background of the event. To tell you the truth, we haven’t managed to discover, who the establishers of this holiday were and why we have to celebrate it on August 17th exactly.

However, we have prepared something really amazing for you. Not everybody knows that the first thrift stores appeared in the UK. It all started with The Salvation Army, when the representatives of renowned Christian charity decided to organize something helpful for people in need. Over the time they opened the first second-hand shops in East London. It happened at the end of the nineteenth century. The main initiator was the Wolverhampton Society of the Blind, which opened the first shop of this category in 1899. The idea was not appreciated, as it was ahead of its time by about 50 years. Unfortunately, there was a lack of communication between shops and charities, which led both to prefer the form of an auction.

Everything changed with the outbreak of World War II and the development of the International Committee of the Red Cross. In 1941, the first ICRC charity store opened, and by 1945 there were 150 of them across the UK. All of them were temporary and were supposed to be used only during the war. The committee staff agreed with the British Department of Commerce to issue specific trade licenses, according to which all the goods of the thrift store were to be given like gifts. Purchase for resale was prohibited. Under the same agreement, shops were exempted from rent and most taxes.

What does Thrift Shop Day mean? Well, are you really sure that we can answer this question instead of you? You see, it is impossible to know all our followers in person, so we can’t even predict their attitude to some particular events. In the modern society it is only up to the person himself or herself to decide what holidays to celebrate and which ones can be forgotten without any hesitations.

The initial promotion of the first thrift stores happened because of the talented skills of Oxfam marketers and managers. Initially they tried to do everything possible to find money and to convince people to donate clothes. Fortunately, their business became fully self-sufficient in a short period of time.

And then in the 60s of the last century, ordinary Englishmen had money. The economy grew steadily, new hobbies appeared and fashion flourished. And if now charity shops are kept afloat due to the culture of conscious consumption, then everything was the opposite. Overseas, John F. Kennedy secured the “Bill of Consumer Rights”, the term “consumerism” appeared, and psychologists learned about a new disease – oniomania, which is often called shopaholism. People could buy a piece of clothing, put it on once, and then literally throw it away. The organizers of the first charity shops played on this. Now all clothes were supposed to be thrown into special donation boxes.

Investigating the question “When is International Thrift Shop Day 2022?” we discovered a lot of amazing pieces of information. Today we want to share some discoveries with our followers.  Not everybody knows that the up-to-date prototypes of thrift shops were opened after the war in 1947 by the Oxford Committee for Aid the Famine. They are still called Oxfam and are in the list of the three pillars of British charity shopping – The Salvation Army, Save the Children and Oxfam.

Surprisingly, the first major Oxfam project was humanitarian aid to Greece, which at that time was experiencing a civil war. Oxfam volunteers collected a large number of different clothes, thick blankets and other items that British families were not stingy with. The problem was that the Greeks practically did not need warm clothes and blankets, so the volunteers decided to sell them and help Greece with money. This is how a working model of a thrift store was born.

Up to the present moment, Oxfam has also found partners among business giants, which allow them to popularize thrift stores again and again. For example, Oxfam is partnering with Starbucks right now.

Here we would also love to mention that every point in all charity store is a win-win for everyone involved, so its future is likely bright. Experts like to predict a quick collapse of everything, especially anything non-profit, but charity shops live on and even bring income to their creators.

When is Thrift Shop Day in 2022, calendar will surely tell you about it, which is not a serious problem, of course. As you perhaps know, the local authorities are hardly to organize any celebrations devoted to this event. That is not a holiday of much publicity.

As it has already mentioned above thrift or so-called stores are a type of assistance. Following their idea, one person sells some of their belongings and another buys, while the received money (or just a part of it) should be sent to the charity needs. There are two various formats: ordinary retail outlets or more modern online stores. Initially they look somewhat like a second-hand or a consignment shop. However, the main difference is that the obtained money is sent to good activities or actions.

Nowadays helping those in need turns out to be an easy thing. The people are just proposed to get rid of unnecessary items or buy something they really need for less money.

If you don’t know who to spend your August 17th properly, spend this day going round this type of shops. We are almost sure that you will find a lot of amazing thing for yourself as well as for your finds, home or office. In such a way you will help not only some men and women, who are in need but also make the plant cleaner and saver, because as you perhaps understand our world is over consumed now.

The question “What is the date of Thrift Shop Day in 2022?” is not as simple and obvious as it may seem at the first sight. It contains a lot of terrific pieces of information, which can be interested for the people around.

All in all, on the contrary to the wide spread believe, the so-called charity stores are quite different from more common second hand shops. Purchasing something there you are doing a good deed anyway – both by giving and by buying. In such a simple way you also continue the life of things and help nature: you do not use extra natural resources that would be used to make new items of clothing, shoes or accessories, you do not need to recycle anything that can still serve and be used.

Nowadays there are a lot of places, devoted to this theme. And such sites themselves are a separate world: in these stores you can find interesting and even unique things, and sellers can help you choose the image and style. It is also nice when all purchases are wrapped in craft paper and beautifully packaged, they can be treated to tea and sweets. Each outlet necessarily provides monthly reports on how much money has been raised and what it has spent on. Such shops, as a rule, are active in social networks: on their pages they display new items, publish photos from events or giving money, etc.

International Day of Support for Victims of Crime

A day without cosmetics and make-up